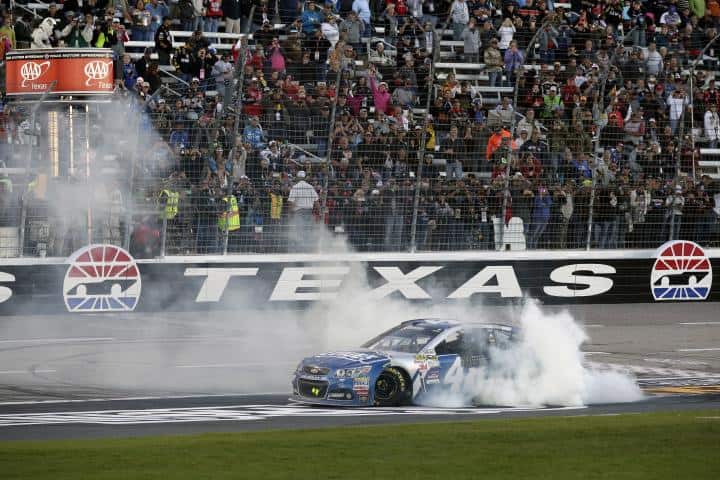 Driving a Sprint Cup racecar is difficult on a good day. They’re difficult, temperamental, mercurial. The track surface at Texas is aging and teams had a hard tome keeping up with it Sunday. And if that wasn’t bad enough, Kevin Harvick had to race the closing laps with one hand. Harvick’s car wouldn’t stay in gear, and he had to hold the shifter with his right hand to keep it from popping out, while steering with just his left. If Harvick hung on for a mediocre finish, it would have been understandable under the circumstances. But he didn’t. Instead, he finished third. A mediocre finish would have left Harvick below the cut line in the Chase heading to Phoenix and made his job there that much more stressful. But instead, he heads there needing merely to maintain, and at a track where he’s been dominant in recent years. He may not be on the tip of everyone’s tongue when talking about title favorites recently, but maybe he should be.

What… is on my mind at Texas?

It’s a bit ironic that Jeff Gordon is poised to be on the storybook ending to his legendary, Hall-of-Fame-worthy career. Leading the points heading to Phoenix, he’s the only one of the Chase drivers still standing who already is secure in making the championship race. It’s ironic because Gordon, who would in all likelihood have a record tying seven Cup titles if not for the Chase, is only in position to win his fifth because of it. Gordon would have been long since eliminated under a non-Chase system, but he’s in contention due to the very system that cost him so dearly in years past. Funny how things work out sometimes.

Brad Keselowski did everything right on Sunday, and he dominated the race, leading 312 of 334 laps. Keselowski drove a hard, clean race at the end, but it wasn’t enough. He finished second… and now almost certainly needs to win at Phoenix if he hopes to compete for his second career Cup title this year.

Jimmie Johnson’s title hopes are already over, thanks to the failure of a $5 part at Dover, and his No. 48 team has struggled for speed for most of the second half of the season. Johnson, who had three wins in the last three fall Texas races, led just six laps all afternoon — but the one that mattered was the last one, and Johnson wielded the winner’s pistols for the fourth time in a row in this race and the second time this season at Texas.

For many teams on Sunday, “tire” was definitely a four-letter word as tire issues, from cording to outright failures, ruled the day. Joey Logano was the first victim, but tire woes also bit Harvick, Ryan Blaney, Dale Earnhardt Jr. and Kyle Larson, among others. One theory was that holes drilled in the racing surface to let rainwater drain prior to Saturday’s Xfinity Series race affected the wear. The tire Goodyear brought was multi-zone, designed to wear heavily but not to blow out at the sidewall. Excessive camber may also have played a role for some teams as well, but whatever the case, the issues definitely affected the racing, and not in a positive way. Surely there exists a balance between the rock-hard Fred Flintstone tires that don’t wear and require little actual strategy from teams and ones that wear to a degree where they’re dangerous. We used to have that, and it needs to make a return.

Why… did Jimmie Johnson win the race?

When Johnson gets good at a track… he gets really good. And he’s good at Texas. On Sunday, he didn’t have the best car all day, but he had a good car, and he took care of it all race long. And when it counted, he was in position to capitalize. Johnson and Keselowski waged a battle royale in the final laps, and Johnson showed why he had 74 wins entering the weekend. He didn’t bump Keselowski out of the way, but he did read him supremely well in the final laps, and that was all Johnson needed to do to take away Keselowski’s line and make the winning pass… and once he did, he drove away for his fourth straight win in the fall race at Texas and the season sweep at the track for 2015. He didn’t win because of anything but his ability to read Keselowski and to drive by him (throwing out the theory held by some that it’s not good racing if there’s no contact), and the win is the 75th of his career, one shy of Dale Earnhardt’s 76 wins that stand seventh all time. He’s also one of just three drivers entering the sport after Earnhardt to win more than 50 races.

Martin Truex Jr.; Furniture Row Racing: Truex had a solid race and was in position to race for the win at the end. Thanks to power steering woes, he wasn’t able to make a winning pass, but Truex has shown such remarkable consistency in 2015 that unless he misses the final cut for Homestead (and the race is tight), he’s really hard to count out for the title before the checkers fly.

AJ Allmendinger, JTG Daugherty Racing: The weekend didn’t start out the way Allmendinger and Company would have liked it to, but by the end, it was a solid effort. The smaller teams do take pride in their own points race, and Allmendinger gained a little ground on Casey Mears for those honors. He’s 16 behind Mears with two races to go, so it’s a pretty decent battle going on for bragging rights. Allmendinger was easily the best in this group in 2014.

Landon Cassill; Hillman-Smith Motorsports: A top 25 for this team is a big deal. A switch to ECR engines for this season has paid off, and Cassill has driven well. They’ve had some bad luck, but all in all, have grown leaps and bounds over the last couple of seasons.

Yessum Amy, the big six are answered…things are as they should be.

I also think the fact that there were no practices on Saturday increased the tire issues during the race. With so much on the line it’s just wrong that there weren’t any practices but, everyone had to play with the same limitations. Once again the new elimination format just magnifies the variables beyond anyone’s control that determines who wins the championship and raises the crapshoot factor. Yeah, that’s a hell of a legitimate format you’ve created there Brian.

Hard to blame Goodyear when so many other teams had no issues with tires all day. Let’s be fair.

We don’t need Goodyear messing with(or bringing back rock hard tires) the tires as they seem to have improved this in the second half…If it was the tire I would suspect 27 teams would have had issues..All we need is some one getting that started again…Re : Joey-Karma manNote it is not a tire wear issue on lap 7?

Completely agree. What, only 4 drivers had problems? People love to blame Goodyear, but this is squarely on the teams if the other 39 teams didn’t have any problems.

Johnson’s car sure gets fast when he wants it to.

I’m disappointed that Brad didn’t get the win, but on the plus side my Clemson Tigers knocked off Florida State to go to 9-0 and the Carolina Panthers are undefeated as well. I guess you can’t have everything.

I go back to hating the Chase with it’s 10 race format, throws the whole season away. I remember a few years ago they had a rain delay at Chicago…well something happened to the wiring of Jr and Logano’s car…they started to race after a delay..and poof mechanical issues basically blew their chances…how should that be? There was no way out of 10 races for them to make that up. Now the noose is even tighter as we noticed with people with much better stats were squeezed out getting the Homestead Championship Trophy, add mechanical issues, tire issues. etc. it comes down to luck. What other sport has eliminated “teams still on the playing field with you, what other sport has a dependency on other things, other than the players, a ball and a bat? I have said it for years, and BZF still digs his high heels in.