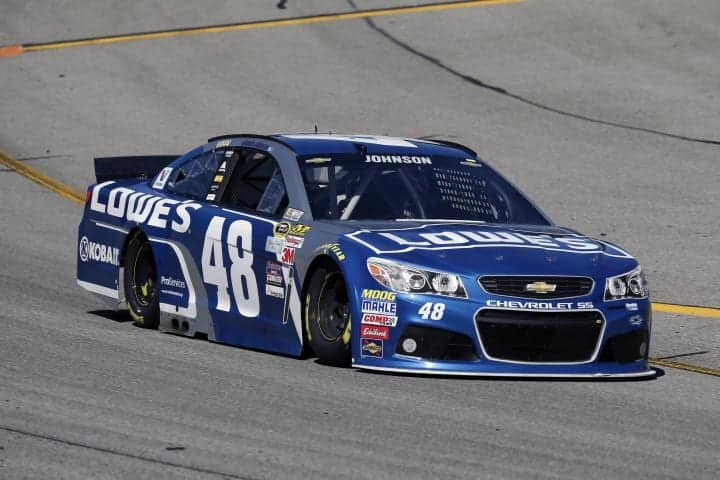 By all accounts, Brad Keselowski should have won the race at Texas Motor Speedway on Sunday. After starting on the pole, Keselowski dominated the race, leading 312 of 334 laps. Most of those remaining laps were during cycles of green-flag pit stops or short periods where other drivers – like Kevin Harvick – were briefly able to lead a few laps.

Of the laps, 11 of those were from Jimmie Johnson, who led the final four laps of the race en route to the victory. Despite the fact that Keselowski had by far the strongest car, a late-race restart and some contact between Keselowski and Martin Truex Jr. gave Johnson the opportunity he needed to get to Keselowski’s back bumper.

All the same, there had been a number restarts throughout the day – nine to be exact. Keselowski excelled at all of them and it was green-flag pit stops that had created an issue for Keselowski more so than restarts had. In fact, the final run to the checkered was the only time that any driver was able to stay with Keselowski, let alone challenge for the lead in the same way that Johnson did.

When asked what happened and why Johnson was able to keep up with him at the end of the race, Keselowski responded: “I’m sure we could have done something different.  I don’t know if I could have, but we could have. We’ll have to go to work and try to figure it out.”

In other words, he wasn’t really sure.

Johnson, however, had a few ideas.

“In today’s race I felt like the No. 2 car had the field covered,” Johnson said in the post-race winner’s conference. “Whatever went on with the adjustments in that last pit stop, the track getting shade on it, cooling down, really helped my car and it hurt his car. Maybe the second lap I could see that his car was getting really tight.  He couldn’t even run the bottom of one and two as we rolled off in there. I was pretty optimistic hopefully I could get the pass done. Got close. Got next to him. Just couldn’t really pull the pass off. Then finally he slipped pretty good off of turn 2, and I came from like the third lane with a huge run down the back straightaway and was able to clear him going into turn there.”

Regardless, it appears that the adjustments made to Keselowski’s car didn’t match the changing track conditions and created an opportunity for Johnson to make the pass.

Or maybe Johnson just flat out-raced him. That’s not so far-fetched right? Keselowski may be a Sprint Cup Series champion, but Johnson is a six-time series champion and knows a thing or two about racing for the lead. Sure there must have been some sort of handling issue for Keselowski in order for Johnson to be able to keep up, let alone make the pass. However, in watching those last few laps, one thing is pretty clear – Keselowski flat out got beat.

Which is okay, too. It was a refreshing change to the chaotic wins and losses in the last couple of weeks, which were the result of spins, crashes, or recovering from someone else’s misfortunes. Blocking or not, Logano spun Matt Kenseth out to win at Kansas. Talladega ended under caution in a controversial finish, to say the least. And despite the fact that Jeff Gordon’s win at Martinsville was heartwarming and popular, there’s no arguing that Logano would have likely gone on to win the race had Kenseth not run him into the wall.

So what I concept, then, that Texas ended with two drivers racing for the win… and one of them simply out-races the other. No bump and run. No spin. No running someone up into the wall. No name-calling, shoving, or whining after the race about how one person raced the other too hard. No cheering from fans when they see a wreck despite the fact that they claim to hate when “casual” fans do the same thing (the reaction from the crowd when Logano went to the garage this week notwithstanding).

Nope. Texas may have been the race where tempers boiled over last season, but this year it was just simply – (gasp!) – a race. The contact between Keselowski and Truex didn’t seem intentional (and Truex certainly didn’t seem to think so) but that was the only “contact” moment in the race.

Heck of a job. Pleasure racing hard with you as well.
If @Team_Penske can't win the championship, I hope you do. https://t.co/tnZHAifcDs

I wish we had more races like Texas. Sure the race was at first rather dull because Keselowski was running away with it, but watching two drivers race hard for the win while still racing one another cleanly is the ultimate in pure racing. Had Truex been able to maintain his position, it could have easily been a three-man battle.

And none of them were mad at each other after the race – WOW!

After the last three weeks of chaos, tempers, and hurt feelings, it was nice to see a race just be a race. No soap-opera storylines or one-liner soundbites. The highlight reel might be slightly amiss but the racing was legit and that’s all that you can really ask for.

As far as Keselowski, he and teammate Logano are in dire straits. While Keselowski can get in on points, he would have to rely on some bad luck from his competitors. As for Logano, I don’t see any other way around it. He has to win. While it wouldn’t be surprising for one of them to go to Victory Lane next week in Phoenix, they can’t both win, meaning it’s likely that only one of them will be racing for the championship (if at all). That’s not even taking into account that drivers like Harvick, Kyle Busch and Truex will all be trying to lock their way into the Chase and, with only eight drivers left, there are several strong teams outside of the Chase who are more than capable of winning next week.

Bottom line? Texas may have had a quieter ending than the most recent weeks. We’d better enjoy it because, considering the impact next week is going to have, it’s not likely Phoenix will end with so few hurt feelings.

At least it was nice while it lasted.

.now don’t be showing that twitter feed…it will spoil the narrative already making the rounds… :)

That stupid hat looks like he borrowed the Austin Dillon’s. :) And yes I know he owns a few……

The difference is that Austin is a real cowboy.

yeah right. Never see him wearing outside of the race track in any interviews or video I have seen of him. Its all for show and he looks ridiculous in them.

Wow, 2 cars make contact and its viewed as racing by both parties? Who’d of thought? Are we sure this is Nascar we are talking about here? Oh right. Kenseth wasn’t involved.

Correct..stop making sense…the thousand times that move Logano made has been racing and praised…it becomes a evil ugly thing when he does it. But the sheep cannot see beyond their hate and bs. Sick stuff. It wasn’t done by a Chebbie!