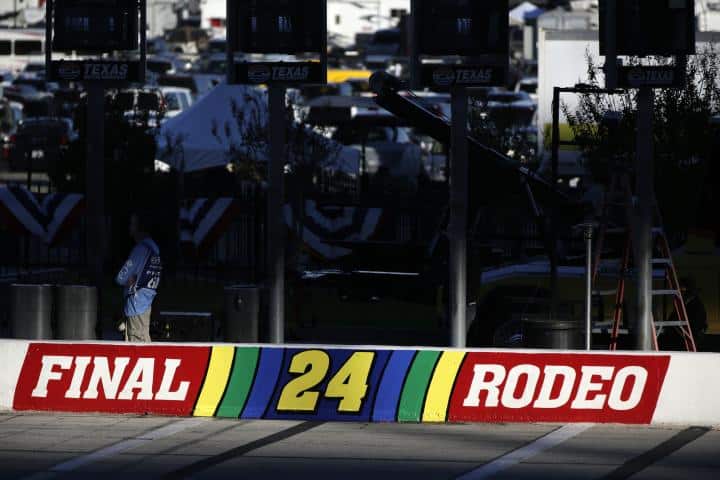 Color me confused. Brian France called Joey Logano’s move to win at Kansas, where Logano got into a hard-blocking Matt Kenseth, “quintessential NASCAR” and the fans booed.  Kenseth called Jimmie Johnson’s ultra-clean pass for the win at Texas “quintessential,” and the fans cheered. When, exactly, did that happen? And how long will it last?  There was a time when if a driver didn’t use a bumper to go for the win in the closing laps, fans got all up in arms and called him all sorts of unflattering things because he didn’t do what it took to win. If there was no contact during the race, even if there was some good hard racing, some fans played the “boring” card. So now, rubbing suddenly isn’t racing?

Don’t get me wrong, I would rather see a move like Johnson’s than one like Logano’s any day, though it’s naïve at best to think Kenseth didn’t play a major role there. You don’t get infinite blocks without getting moved eventually. But with all the uproar about drivers being too clean and not using a bumper we’ve heard in the last few years, why the sudden reversal?  Is it because the driver using the bumper was Logano? What if it had been Dale Earnhardt Jr.? Would he still have deserved the punishment Kenseth meted out the following week? My guess is the collective answer would be no. What if it had been Logano blocking and Kenseth getting into him? How about Johnson, a driver praised by his peers for his clean driving? Is the sudden change of heart because of the person doing the driving, or have fans truly changed their stance on using the chrome horn to win? Inquiring minds want to know.

Speaking of Johnson, 11 days from now, he will hold the benchmark for wins for an active driver. Johnson, who scored his 75th career Cup win Sunday, will supplant Jeff Gordon as the winningest active Cup driver, and take over several of Gordon’s active driver stats at individual tracks as well. 75 wins is still far short of Gordon’s 93, and for Johnson, catching Gordon will be a stretch as he’s just four years younger. Johnson has more championships than his one-time mentor, with six to Gordon’s four, but it’s hard to compare the two in that category as all of Gordon’s titles were won under a full-season format, while all of Johnson’s came in the Chase era. Still, Johnson will become the only active driver with more than 50 wins, and his next trip to Victory Lane will tie him with Dale Earnhardt Sr. for seventh all-time.

Johnson’s rise to the top is an interesting case study. He’s had just one crew chief his entire career, which some actually cite as a reason to discount Johnson’s considerable skill on the track. The other thing fans bring up as a reason that Johnson is somehow lesser than the numbers suggest is the Chase title, which, while they may not mean as much as a full-season championship once did, aren’t Johnson’s fault. He won with the title system he was given.

One last observation here: when Brad Keselowski was driving for Earnhardt Jr. in the Xfinity Series, he won three Most Popular Driver titles. Now, in Cup, he no longer enjoys that degree of popularity driving for Roger Penske. When Johnson entered the sport, his owner of record was Gordon, who was reviled by many fans for a myriad of reasons that look silly in retrospect. One of Johnson’s first experiences in the Cup Series was being told by a fan who disliked Gordon that he hoped Johnson crashed and burned to death. Johnson has struggled to gain popularity in the series, though he’s gained a lot of support over the years, like Gordon has, because of his accomplishments. Looking at his win over Keselowski Sunday, it was a little like the All-Star Race several years ago where Rusty Wallace got into Darrell Waltrip and fans suddenly loved Waltrip, whom many had vocally disliked, and Wallace became the villain. Changing times for Johnson in more ways than one?

3. Speaking of the best…

There’s definitely a certain irony in the fact that Gordon is in the fight for his fifth title under a system that has cost him more than one. While it’s true that everyone would have approached the last dozen seasons differently if the Chase hadn’t been a factor, it’s highly likely given the number of points he accumulated that Gordon would have six or seven titles without a late-season reset helping the competition. This year? He’d be mathematically eliminated from contention under a full-season format. Funny how things play out sometimes.

4. The race within the race is pretty hot.

While the top teams are waging a battle for the championship, a top-10 season finish or a race win, there are a lot of smaller teams waging battles of their own. Those teams take their own races very seriously. While the No. 78 of Furniture Row Racing has moved firmly out of the underdog category and well into elite status, there’s a pretty solid points battle going on between Casey Mears and AJ Allmendinger for the top spot among the smaller organizations. Mears currently holds a 16-point advantage over Allmendinger with two races remaining, and while 22nd in points may not seem like a lofty goal, consider the funding of the team just ahead of the pair and some of the ones behind them as well. Every race, those teams know exactly who they’re racing and take great pride in being best in class. It’s a race within the race, because while most of them aren’t going to contend for wins, with a few exceptions, they can certainly earn some bragging rights. The prize money, meager though it may be for finishing 18th or 25th or 30th, means a great deal. The top-25 teams get a slice of the season points-fund pie, so the points battle between Mears and Allmendinger bears keeping an eye on. Plus, it’s something different from what’s being force fed to fans nonstop this time of year.

Reading what different drivers and other personalities in the sport have to say on Twitter is food for thought because well, what if they came across like that all the time? The old vanilla argument would be a lot harder to make if drivers injected some of the fire they show on social media into their post-race interviews. Kenseth can bring the snark, and boy did he after the race Sunday. Johnson spars with his detractors and obviously relishes doing it. Keselowski’s posts will make you think about any number of subjects. The banter between Alex Bowman and Matt DiBenedetto and sometimes others, like Landon Cassill, is classic. You get glimpses of the real people behind the sponsor-created facades and it’s refreshing and fun. Maybe the sponsors need to take a hint and change how they rein in their drivers… the results could be dramatic.

There is no question, inquiring minds should have their own questions answered. I say the fans are nuts, hypocritical and it has everything to do with who did the actual driving, never mind what precipitated the move and it was valid, for how long one was patient, that doesn’t matter a wit…..that youngin…the unapologetic, gloating punk. Never mind he did not gloat, he said he knew what he did, and Matt knew what he did. THE NERVE!! Not that anybody against him would look at it but he has a very good and PROFESSIONAL explanation at this past Fridays media day interview at Texas. Race fans immediately would understand.

And again, I always gotta ask..why is Team Penske in the eyes of the fans and the Chevy guys in the garage are the ones who must always bend over, grab their ankles and do what Biff the Bully says. I call Bs on the driver code and all of the other Bs mind games that are being played on the most juvenile level, from social media to media interviews. Team Penske in the bully crosshairs, has been head and shoulders more mature than the others. I still contend that if Junior did that move, or in reality any other over 40 driver..the “driver code” would have been cool with all of it. If Batty Matty lost his cookies the way he did with Logano, and pulled that crap with Junior, The Nation would have left no stone standing at Castle Kenseth, his children would be harassed, and he would be in WITSEC. Come on, please even the hater must admit that is a true statement, if you don’t you are in fantasy land.

Yawn…………………….your spewing crap is getting old. We all know, in your sick, demented head that your precious Joey is a perfect angel that can do no wrong. Get over it and quit the waaah, waaah routine.

I’ll tell you what’s getting old, Spot… reading your posts and seeing the term “precious Joey” over and over. Matt Kenseth got suspended. Get over it indeed.

You really know what Joey did wrong? He put himself into a position where something could really bite him in the butt. He didn’t have to spin Kenseth, he was faster but he chose to anyway and ended up putting a target on himself. And, go back and watch those laps at Kansas, Kenseth never forced him into the wall and Joey was never alongside of him. Joey did that all by himself. Now, take that and eat it. And, I said right from the get go that Kenseth went overboard but Logano definitely deserved something. Apparently, I’m in the majority of the thinking, even per other drivers on the circuit. You are the minority.

I don’t know or care whether I’m in the minority or not. Martinsville was two races ago, Kansas three races ago. Tme to move on if you can.

I wonder if Bad Brian knows the meaning of “quintessential?”

Maybe it’s time for your buddy kb to move on.