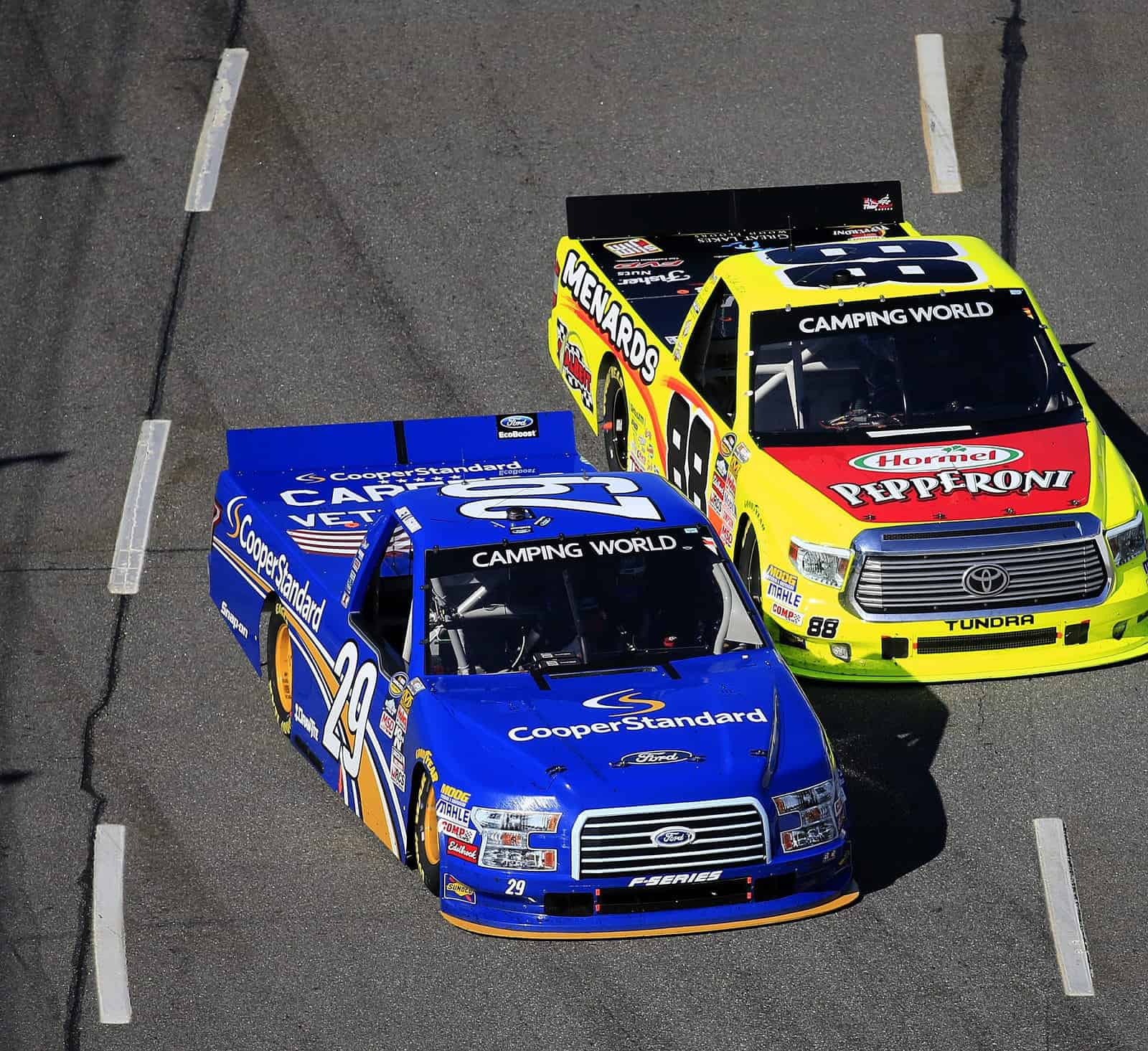 What a great finish we had in the AAA Texas 500 at Texas Motor Speedway on Sunday. Jimmie Johnson proved that though he may have not had the season he would have liked, he can still pull off a victory and remind people just how dominant he is at Texas in October. While the win doesn’t really do anything points wise for the No. 48 team, it still must feel pretty good for the team to beat Brad Keselowski, who dominated the event for most of the day.

Keselowski, on the other hand, suffered a devastating loss. After his accident at Martinsville, he needed a rebound weekend and was on his way to just that, leading 312 of the race’s 334 laps. If he had won, it would have been a big win for his Team Penske. It would have had at least one driver in the Chase but now, given Kevin Harvick’s past dominance at Phoenix and Joey Logano’s struggles in the last two weeks, it’s quite possible that both Penske cars will be out the outside looking in come Homestead. That all could have been prevented if the No. 2 team won on Sunday.

BOWLES: Penske Potential Peters Out… Because Of Personality?

Q: What is NASCAR thinking adding a Chase to the Truck Series? The Cup Chase is bad enough! Derrick M. – Wisconsin Rapids, Wis.

A: That’s a question I’ve been wondering myself, Dave. I love the Truck Series and how competitive it is, but let’s look into a little more detail as to what it is NASCAR is looking to do by adding a Chase in the Truck Series. The rumored format is that it will be an eight-driver, seven-race Chase with an elimination of two drivers after each three-race round, with four drivers battling for the championship in the final race at Homestead.

Using that format, the six drivers advancing to the second round of the Chase if it were in effect in 2015 would be Crafton, Reddick, Jones, Sauter, Peters (Talladega win) and Townley (Vegas win), eliminating both Hayley and Hemric.

Obviously we don’t know who would make it into the Chase if we used the format in 2015, but Crafton would advance due to his win at Martinsville and Jones would advance due to his win at Texas. Both of those wins were huge this season for each driver. A Chase wouldn’t have changed that. The Truck Series points battle is the best of the season and has been something to watch all year long.

Plus, there have been seven drivers in 2015 who are not eligible for points in the Camping World Truck Series who won a race: Joey Logano, Kyle Busch, Cole Custer, Kasey Kahne, Christopher Bell, Ryan Blaney and Austin Dillon. But yet the format is supposed to focus on winning? The only way it makes sense is to limit the Cup drivers participating in other series, which I don’t see happening anytime soon.

Q: Hi, the tires this weekend at Texas were a disaster. I feel like tires are always an issue. Is it time to consider other tire suppliers for NASCAR? Matt H. – Seattle, Wash.

A: Matt, your complaints about the tires were certainly warranted for this weekend at Texas Motor Speedway. We had a ton of issues on Sunday for a bunch of different reasons. Some teams I believe had setups that affected the tires but there were still other issues. I don’t like the excuse of not having rubber down on the track either, because when they do tire tests, there is no rubber on the track then, and the teams don’t seem to have the same problem. We also had a 300-mile Xfinity race with the same tire and it still wasn’t ‘rubbered in’ yet. There was a problem on Sunday but we don’t really see too many issues with tires wearing very often.

However, to answer your question, no we do not need another tire supplier for NASCAR. Goodyear has been working with NASCAR since the beginning and it has a lot of notes and tests it’s gone through to make the tire as best as possible. With all the information available to them, they have an upper hand on every other company that can possibly come aboard and provide the tires. Those companies would have to start from scratch and that would mean major issues as far as tires were concerned.

The last time we had a tire provider that was a competitor against Goodyear was in the late 1980s and mid-1990s when Hoosier competed in the sport. Back then, both companies got aggressive with their compounds to try and outdo one another and it created a dangerous atmosphere for the drivers. We don’t want to see that again.

Generally the tires are not an issue. I think the biggest and most common problem with the tires are that they are too hard and that’s not entirely Goodyear’s fault. I think since the ‘tire disaster’ at Indianapolis Motor Speedway back in 2008, both NASCAR and Goodyear have erred on the side of caution and made tires harder than ever before. That means a lot of the times we see tires not falling off and that doesn’t help with passing.

However, rumor has it that Goodyear will work with NASCAR to provide a softer tire for the 2016 season, and that is a step in the right direction.

Yep, everything is great and there is no reason to change anything. As long as Goodyear doesn’t lose the address to send the checks to change would be ridiculous.

I despise the chase for the Cup series and there are a lot of fans who feel the same way. So of course, NASCAR, who ALWAYS listens to its fans, thinks it is a great idea to add it to other series, too.

The good news is that next year, I’ll be a casual fan and whatever inane ideas NASCAR comes up with won’t matter to me at all.

Apparently the drop in ratings and attendance with the ‘new and exciting’ crapshoot for the title haven’t made an impression on BZF yet. With reasonable close title runs in the Xfinity and Trucks, why on earth would you inflict this stupid format anywhere else? It’s pathetic enough that the Cup title now has nothing to do with what happened thru 2/3 of the season. But all is wonderful in Nascarland and Brian is a genius.

Cup-wise, I will never by sold on “the Chase.” While I appreciate & understand that the Chase has been successful, in general of rejuvenating & spurring neophyte interest at the end of the Cup season, when they compete against several other pro sports. However, my champions are the driver & owner who wins the straight point count. I do not participate in any bracket-ology. I tune out as much Chase hoopla as possible because I see ALL races (of any & all sort) as exciting, if not spell binding. Racing is by nature, dramatic, there in manufacturing drama is as disingenuous & disenfranchising as breast augmentation or collagen injection. The Season’s Driver’s Points Champions & the Chase winner are two different & incomparable things. The Chase is an abomination. Albeit an exciting & dramatic one, but an abomination just the same. As illustrated by the straight season’s points count [below], rather than reward consistency & superior performance thru the season, as every other major motor-sports championship in the world does, now & historically, the Chase defeats & negates consistency & superior performance …over & over & over again.
(post-TMS) Current points system, NO Chase points resets.
1) #4-Kevin Harvick (C3), 1234
2) #22-Joey Logano (C8), 1217 -17
3) #88-Dale Earnhardt Jr. (EC), 1147 -87
4) #2-Brad Keselowski (C6), 1138 -96
5) #78-Martin Truex Jr. (C4), 1102 -132
6) #48-Jimmie Johnson (EC), 1080 -154
7) #11-Denny Hamlin (EC), 1047 -187
8) #19-Carl Edwards (C5), 1042 -192
9) #41-Kurt Busch (C7), 1035 -199
10) #24-Jeff Gordon (C1), 1032 -202
11) #20-Matt Kenseth (EC), 1009 -225
20) #18-Kyle Busch (C2), 779 -455
As this clearly depicts, one of the Chasers has barely half the leader’s points tally & is over 450 points behind the leader in “real-world” standings. Furthermore, 3 other Chasers are over 190 points behind the “true” leader. And of the utmost supreme irony, the drivers that are P1 & P2 in Chase standings are the farthest behind “real-world” straight points (non-Chase) leader. No words could more clearly illustrate my negative feelings about this format than this reality!
The Chase, in essence, is like putting the top 16 car numbers in a hat & pick one, blindly. Or draw straws for the championship. #4 has as good of a chance to take the Cup home as the guy who is P20 & over 450 points behind him!
A Cup, which was once the invaluable epitome of motorsports championships, is now relegated to a reward bestowed upon survivor of a manufactured gimmick. A gimmick, that in the face of implausible denial, promotes & rewards unsporting, unethical, barbarous & criminally assaulting behavior. And, at many specific times & situations, penalizes 100% effort, penalizes superior performance & penalizes supreme dedication & penalizes obtaining good results.
Another negative aspects is in the fact that with 8 Chasers remaining, everyone else (35 teams) are now relegated to “what’s-his-face-also-rans” status. Ie: Aric Amirola in the RPM #43 has top 10 finishes in (something like) 7 of the last 8 races & qualified 8th today, yet it has garnered him & the #43 RPM team next to ZERO media hits. The non-chase drivers sure don’t deserve to be relegated & ignored like that, their teams sure don’t deserve it & their sponsors clearly have paid for something they are NOT getting! So, as I see it, in a certain manner, the Chase DEVALUES performance, ethics & sponsorship …as well as the sport in general. Again, I do not like & do not appreciate what it has done to the sport, because it has devalued aspects of premium importance, like series & race integrity, which seem to have been sold down the road. Again, I can not deny that it is successful in manufacturing drama. But that is paid for by cheating many motor sports supporters & advocates, around the globe, out of a clear & definitive season’s champion …but more importantly, cheats them out of series INTEGRITY! And, imo, NOTHING is more valuable than that!