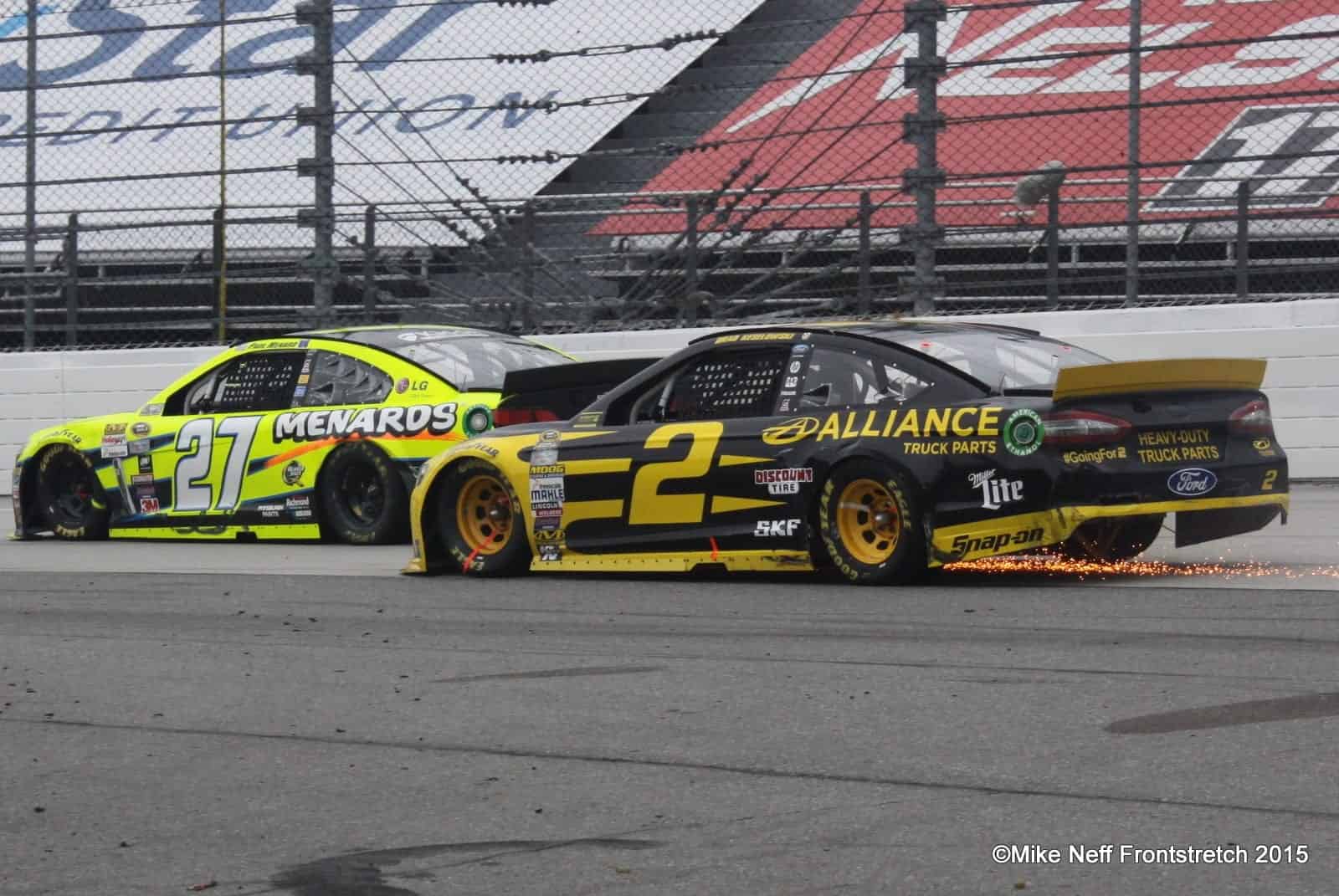 Almost three years ago, fresh off his 2012 Sprint Cup title Brad Keselowski appeared ready to vault toward superstar status. Somehow, he had fended off five-time champ Jimmie Johnson despite driving for an organization in Team Penske that left him on an island. His teammate in the No. 22, AJ Allmendinger was fired midseason after failing a drug test and a hodgepodge of replacements did little to feed information Keselowski’s way. Looking back, his effort in the No. 2 car considering the circumstances became one of the most surprising NASCAR championships in recent memory. It was the closest we’ve come to a single-car team winning the title since Dale Earnhardt was the last to do so in 1994.

Keselowski, one of the smartest drivers in the sport looked to correct that for 2013 and beyond. He felt the key to becoming a multiple title winner was to find a teammate that could grow along with him, a “young gun” capable of shooting bullets instead of shooting the team in the foot. Enter Joey Logano, discarded by Joe Gibbs Racing at the ripe old age of 22. Sensing an opening, Keselowski got the protégé hired; his crew got fired up and after decades of strife Team Penske blended into a smooth, information-sharing operation.In many ways, both drivers have been on top of their game ever since. Logano has won a dozen times in three years, including the 2015 Daytona 500 and led over 2,600 laps. Nine poles have proven his speed can start on Friday and carry over into Sunday; an average start of 6.9 in 2015, this year of track position leads all drivers. The “new hire” has combined with Keselowski to win 18 times in the last two years, a competitive total with the sport’s top teams even though Penske has half the cars of rivals Hendrick Motorsports, JGR or Stewart-Haas Racing.

Most Sprint Cup Wins Since 2014

There’s a lot to be proud of over at Penske. Yet here we are, less than two weeks from the NASCAR season finale and it’s almost certain this group will be on the outside of the title race looking in.

Logano’s ugly incident with Matt Kenseth at Martinsville puts him in a “must-win” situation at Phoenix; Keselowski, despite leading 312 laps Sunday at Texas finished second and remains inside the same boat. Despite their position in the sport as the youngest team (in position to get even younger with Ryan Blaney coming up through the ranks) they haven’t gotten won the war during this stretch: a Sprint Cup championship.Why does this duo continue to fall short? That question can also include owner Penske himself, a Hall of Fame owner in INDYCAR yet without the championship hardware he should have won on the stock car side. Former driver Rusty Wallace came close, in 1993 and ’94 but a myriad of DNFs canceled out trips to Victory Lane and awarded the title to Earnhardt. A decade later, Ryan Newman had an eight-win, domineering season in the No. 12 car yet lost out to Kenseth in the final NASCAR championship decided without a playoff (2003).

Some might say the “boom or bust” mentality Penske’s stock car team was once known for would hurt him in a point system that rewards consistency. Yet Logano has been so polished, so on top of his game this season he’d be leading the points without a Chase. Both drivers are capable of winning at any track on the circuit, exactly the type of talent you need when a victory advances you to the next round of NASCAR’s playoff. Both men, two of the youngest among the sport’s top-tier drivers are connected to technology and incredibly intelligent, a huge help to their crew with the sport’s modern changes and often one step ahead of their rivals. So what gives? Is it just a series of “bad luck” moments or do adjustments have to be made in the offseason?

The answer is unknown. But there’s an intriguing question here of how personality, especially in this age where track position is key has been injected into NASCAR. Both men have found themselves with more enemies than friends in the garage in recent years. The battle between Kenseth and Logano is well publicized but Penske’s younger driver has found himself battling with Denny Hamlin, Greg Biffle, and Kevin Harvick. A tangle at Fontana a few years back left Hamlin sitting on the sidelines for a month; the former teammates have mended fences but aren’t exactly best friends. Keselowski, meanwhile has triggered incidents with Jeff Gordon, Kenseth, and Hamlin which wind up centering around the same issue amongst the veterans: respect.

What I think of whether this duo respects other drivers on the grid is completely irrelevant. NASCAR clearly thinks Kenseth went over the line in issuing his two-race suspension. But no penalty for the veteran – who remained adamant this weekend he wouldn’t change a thing – changes the fact he almost certainly ruined Logano’s title chances. That issue was based around respect. Then, take a look at what happened Sunday at Texas. You know the first driver to greet Johnson in Victory Lane? It was Gordon, ecstatic to see a potential Chase bid robbed from under Keselowski’s nose a year after contact between the two at Texas cost him a potential title. No matter what we, the media feel or even NASCAR other peers in the garage area look at Penske and see what they perceive to be a lack of respect.

Look, I get it; two races is a small sample size in a Chase format where winning, no matter how you do it advances you to the next round of the playoffs. Yet take a look at the current Final Four in position to advance beyond Phoenix. There’s Gordon, in the midst of a farewell tour who isn’t going to be spun by anyone other than perhaps Clint Bowyer. Next is Kyle Busch, a man whose reputation has been rebuilt with newfound maturity after his Daytona injuries. Martin Truex, Jr. sits third, in position as a Cinderella story as a guy who people feel deserve a break. Kevin Harvick? OK, let’s not go there but what if he gets turned at Phoenix for his actions at Talladega? That puts Carl Edwards in position to take the spot, a once-controversial driver who has mended fences with rivals Keselowski and Kenseth in recent years. The Final Four could very well composed of some of the most popular guys inside the garage as of late. Keeping your nose clean, remaining on friendly terms and not hurting someone’s feelings has its perks.

I know what you’re saying. “Do Joey and Brad need more friends? Isn’t that so high school? Doesn’t that have nothing to do with sports?” It all sounds so Mean Girls and silly when you get down to it. I agree Johnson would have likely shown as much aggression with Keselowski regardless of whether the Gordon incident happened last year.

But still. You wonder what would have happened with Kenseth had Logano actually reached out and apologized. You wonder if Keselowski’s “tell it like it is” philosophy might leave a few less drivers on the track leaving him room on a restart. It all sounds so ridiculous… yet there’s signs friendship could have made an impact.

We were always told nice guys finish last in sports. Yet isn’t it weird being nicer might have made a difference in Penske finishing first?

21 thoughts on “Bowles-Eye View: Penske Potential Peters Out… Because of Personality?”