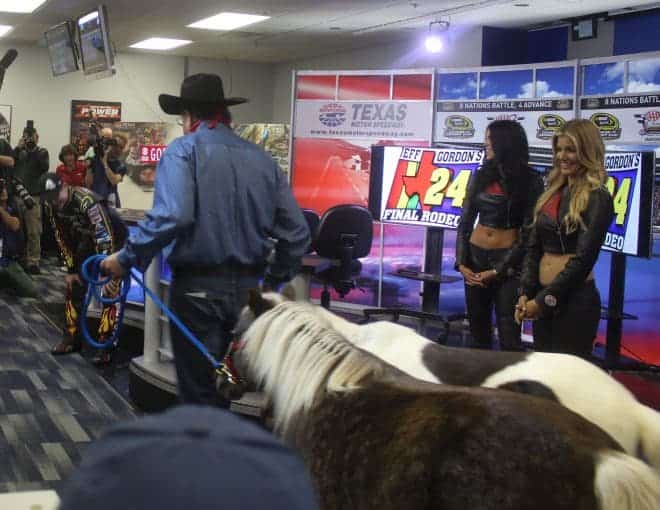 Joey Logano took his driving skills off-road on Tuesday morning. We’ll admit we wish he would turn the keys over so we can have a go.

Today in classrooms everywhere: "Who knows what a 'textbook pass for the lead' is?" pic.twitter.com/JrTycZq2ow

NASCAR Wonka shared this hilarious tweet the day after the AAA Texas 500. Wonka joked that classrooms all over the United States will be asking students for the textbook definition of passing for the lead. We hope all students will pass the curriculum.

Damn shame we had a loose wheel after the restart. Fun racing with @keselowski. Rf started shaking, got tight had to nurse it home.

Heck of a job. Pleasure racing hard with you as well.
If @Team_Penske can't win the championship, I hope you do. https://t.co/tnZHAifcDs

Brad Keselowski had some nice words for Martin Truex Jr. on Sunday after the race. The pair got together on a late-race restart but presented this example of good sportsmanship between two competitors. NASCAR racing is one of the few sports that brings everyone together… most of the time.

Jimmie Johnson ended the afternoon as the happiest man in Texas after passing Keselowski for the lead with three laps remaining of the AAA Texas 500 on Sunday. Johnson later posted this selfie of him and his crew following their celebration in Victory Lane.

NASCARCasm was determined to have one of his tweets featured on the giant video board on the back straightaway at the Texas Motor Speedway. So much so that he sent out a tweet featuring a puppy.

A few minutes pass by and…. finally. But without the dog…

Fun day introducing the kids to the new additions to the family. Thanks @TXMotorSpeedway #shetlandponies pic.twitter.com/M4zqbqFrvb

Jeff Gordon and his kids got a huge surprise from the Texas Motor Speedway president Eddie Gossage over the weekend. You should have seen Gordon’s reaction when Gossage walked in with these.

Enjoying a nice round on this beautiful fall day pic.twitter.com/zQ0wByuQBx

Denny Hamlin showed his support for teammate Kenseth while enjoying himself at the golf course. Hamlin later created shirts for the public to purchase with the money benefiting his charity. Talk about turning a negative into a positive.