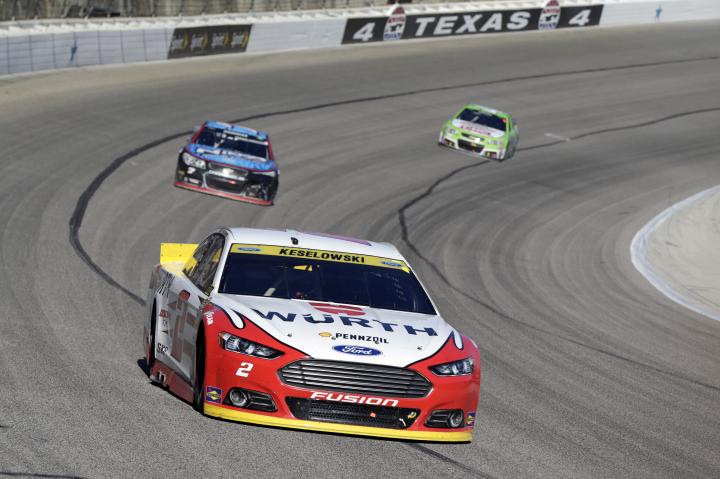 The NASCAR season is down to its final two races and there are still a lot of questions to be answered. One thing that cannot be questioned is that each of the last four races have been filled with their share of controversy. Don’t expect that to change next week as there are still seven drivers going for three spots to be a part of the championship four at Homestead in two weeks.

NASCAR is getting itself plenty of attention in recent weeks for various reasons. You may or may not like those reasons, but nonetheless, they have certainly been headline worthy. Four weeks ago there was Joey Logano-Gate, where he bumped Matt Kenseth out of the way to win at Kansas. Three weeks ago at Talladega there was the Kevin Harvick Restart-Gate, which ultimately led Harvick to advancing to the next round of the Chase. Last week at Martinsville, there was Kenseth Revenage-Gate, where he returned the favor to Logano and received a two-race suspension as he was several laps down when he wrecked Logano. Then Sunday at Texas, there was another version of Tire-Gate, where drivers from all different teams unexpectedly suffered blown tires, sometimes not long after receiving new tires after pit stops. So, it wasn’t just about who had the fastest car, but who could manage tire wear and also, when a tire did blow, who could slow down quickly enough so the tire shrapnel would not shred up the body on the car. The powers that be can give every kind of explanation they want about the tire issues Sunday, but the bottom line is it made Goodyear look bad and it’s not the best situation to deal with in such an important race at this late stage of the season.

Just a couple of weeks ago it would have been perfectly legitimate to talk about Hendrick Motorsports and the slump it has been in. But two wins later, things have changed drastically for one of the top teams in the sport. Sure, maybe they didn’t dominate either race, when Jeff Gordon won at Martinsville, or Sunday, when Jimmie Johnson won. But domination and winning are two different things. The bottom line is that with Gordon being the only Hendrick driver who will be among the final four at Homestead, the Hendrick cars will mostly likely be a factor in the outcome. And with teammates involved and with Homestead being Gordon’s last race, if they can do some little, or heck, maybe even big, things to help, they certainly will as they should. The point is, the Hendrick teams have reminded us they are capable of winning anywhere anytime.

And this week, lets give a special shout out to the team of Michael Annett for just making it to the track and competing. Annett’s hauler caught fire en route to the track and the crew worked overtime to get two cars prepared. Annett finished 31st Sunday and maybe just as importantly, brought home a paycheck of $99,915 for the Pilot Flying J team.

Brad Keselowski could have easily won this one. A late caution foiled what looked to be a certain win and spot into the championship four. Keselowski led 312 of the 334 laps. Harvick, with 11, was the only other driver to lead more than 10 laps. It’s not the first time this has happened to Keselowski, who appeared to have the race at Darlington under control after leading 196 laps, only to have a late yellow bunch the field back together and opening the door for Carl Edwards to win. Keselowski sits 19 points behind fourth-place Martin Truex Jr., so he will pretty much have to be in win or go home mode again at Phoenix.

Harvick had plenty go wrong Sunday. There were two blown tires and then there was the small matter of having to drive a car 190 mph with one hand on the steering wheel and the other on the gear shift because of worries the car would shift of out of gear on its own. And yes, it’s true Harvick did get a bit of good break with a late caution, but he and his team used that break for a third-place finish. Harvick now has at least some cushion in his hopes to have a chance to defend his title at Miami. He is third in points, but 10 ahead of fifth-place Edwards. It’s not a guarantee, but you can bet Edwards and the other four drivers behind him would gladly trade places in the standings.

Truex and Kyle Busch haven’t been on fire, so to speak, and they were probably pretty happy to see Johnson beat Keselowski for the win. That’s because they are among those top four drivers in the standings now, with Busch in second and Truex in fourth. Truex is in the most precarious position with a seven-point lead over Edwards, and after Gordon, is a close second as the sentimental favorite to win the title given the battle that his long-time girlfriend Sherry Pollex has had with cancer. So, yes, no matter who your favorite driver is, and if you have a heart at all, it’s pretty much impossible to root against the No. 78 next week.

What has been a disappointing season for Kasey Kahne continued on Sunday in Texas. Kahne finished 20th in this one. But more telling for the season for Kahne is that he has had just 10 top-10 finishes this year. The next lowest number for the other three Hendrick drivers is 19 by Gordon. Kahne has rarely even threatened to win this year with just three top five finishes. He’s pretty much in the see-it-to-believe-it stage of his career on if he can ever be consistently good, and if he can ever challenge for a championship.

Kurt Busch had a pretty decent car at Martinsville, only to be an innocent bystander of the Keselowski-Kenseth wreck. And he had a pretty decent car again Sunday at Texas and went on to finish seventh. But like Keselowski and Logano, he will be in win or go home mode as well as he sits 28 points behind Truex. And this is a bit of a shame because for once, Busch’s place in the standings has nothing to do with how good his car has been or what he has done to another driver.

Logano went from being about as hot as a driver can get on the track, to being about as cold as one can be. Logano’s Chase chances first took a big hit with the Kenseth incident last week. Then Sunday, he was one of the first drivers to suffer a blown tire and he was not able to get his car slowed down enough before doing significant damage to the left-rear section of the car. That left Logano with a 40th-place finish and he now sits 63 points behind Truex for the fourth spot. So, Logano’s mission to win at Phoenix will be a simple one, though not necessarily an easy one.