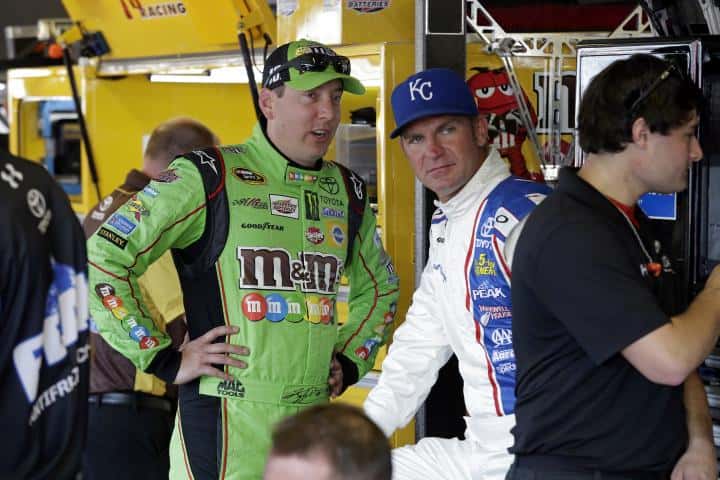 We’re getting to the end of another long season in NASCAR, and it seems that one of the key ingredients is the question of rules and regulations. This ongoing mix of how the sport is policed continues to bring about elements of confusion – for fans, drivers and teams. The adjudication of driver penalties is one area that has certainly received scrutiny.

Matt Kenseth may have driven Joey Logano into the wall, but NASCAR told Kenseth that he needed to sit in time out for a little while. In contrast, Kevin Harvick seemed to cause a wreck at Talladega that ruined a lot of cars and seasons, but got the equivalent from NASCAR of a football ref picking up the flag and saying that nothing wrong occurred.

This week has brought two new instances of making people wonder, “Hey, what the hell is going on?”

The first is involves the splitters of the Joe Gibbs organization. Before the start of the race in Texas, officials confiscated the splitters and took them to the research and development center in North Carolina. It turns out that JGR had applied some kind of resin that would bow the splitters, essentially making them concave, in an effort to get them closer to the ground.

The Penske team endured a similar situation this past summer at Michigan, and it faced no penalties. One might think, however, that after the attempt to manipulate the splitters earlier in the year that NASCAR’s reaction would serve as a warning. Maybe it did – but it seems that the warning wasn’t strong enough, as JGR will also scoot away penalty-free.

Then there is the Texas race and its myriad of tire issues. Harvick, though not the winner, may have had the most impressive drive of the day – one complicated by two cut tires and a misbehaving shifter. It’s the first cut tire that warrants further scrutiny, or rather that caution called because of it.

Aside for the late caution for Erik Jones, most of the rest looked legit. But NASCAR felt it best to call a caution on a car that was maintaining speed on the apron and was in no danger to anyone. The call assisted in keeping Harvick on the lead lap and, for all intents and purposes, kept him in the Chase.

The mix of all these things is a not-so-gentle reminder that the biggest consistency, other than Jimmie Johnson winning at some point during the last 10 races, is inconsistency.

Happiness is… Jimmie Johnson. Eliminated from the prospect of winning a seventh championship, Johnson has looked like somewhat of a non-factor these past few weeks. While we can all acknowledge that the TV coverage skews everything toward the Chase drivers, not hearing Johnson’s name mentioned more has been surprising – or for you other fans, a welcome relief. Leave it to the No. 48 to make an interesting impact on the season by powering past Brad Keselowski in the final laps to continue in making the Chase a difficult set of projections.

Johnson should not be counted out heading into the Phoenix. And you know what’s wild? He has the potential to tie Dale Earnhardt on the overall wins list, which would be a rather striking accomplishment. For all the fans that try to ignore what he’s done, tying Earnhardt really does place Johnson among the greats of the sport. He has a solid record at Phoenix, with four wins, and last won there in 2013. Hence, Johnson might not be done in making himself influential as things progress toward Homestead.

Happiness is… Kyle Busch. You know who’s been quiet nearly the entirety of the Chase? Kyle Busch. By this point in the season, the younger Busch has usually had some kind of meltdown and eliminated himself from the championship, frequently doing so through his own efforts. This year, however, Busch has navigated the Chase as some kind of stealthy competitor, never really making his presence known and doing just enough to make it through. He’s currently in a great spot to move on to Homestead with the prospect of taking the title – though odds-makers probably don’t see it that way.

The funny thing is that Busch benefited from Harvick’s (cough, cough) issue at Talladega, as it brought him above the cut line and allowed him to advance. Is it strange that he’s been as quiet as he has? Sure feels like it. With contenders like Kenseth, Johnson and the others falling off, seeing Busch with a shot at it not a common sight, and at this point feels bizarre. Could it actually happen? Many still see Busch as some kind of young punk, but he’s won everywhere and there’s a good chance a title is in his future. To see him reach the finale would be quite an interesting development.

Happiness is… Trifecta. The Cup, Xfinity and Truck series all have races both this weekend and next. For a change, all three series have championship battles that make both of these weekends crucial. While one might want to make comments about the fact that NXS and Trucks didn’t need a playoff format to get to a tight title race, that aspect is inconsequential.

As the offseason nears and the non-racing doldrums approach, it is good to enjoy the last few races and how they will bring champions. Late-season drama doesn’t always come about so easy, making this year one of the better ones in bringing interest to the sport. Enjoy Phoenix.