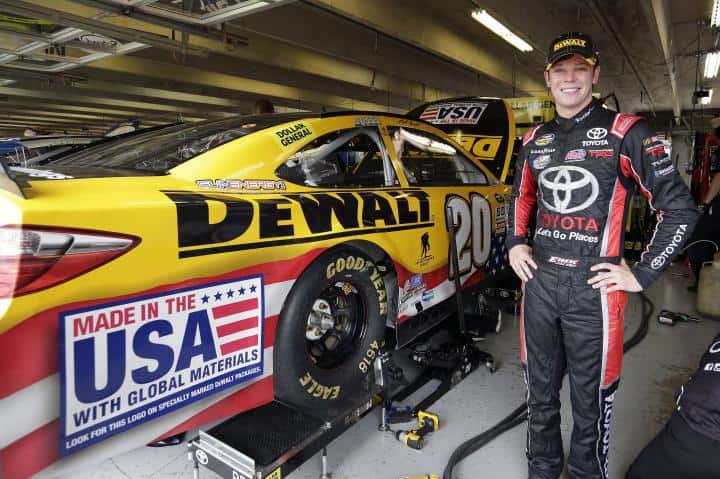 Did You Notice? There was no penalty for a trio of Joe Gibbs Racing teams accused of trying to alter the splitters on their racecars?

Our Jerry Jordan reported splitters had been adjusted to curve further inward, shaped with Bondo or resin in a way to push the car lower and closer to the racetrack. For those who aren’t an expert in technical jargon, here’s how to understand it: you get more speed when less air is sneaking underneath the car as resistance to slow it down.

NASCAR’s decision not to issue penalties, on the one, hand makes sense. It’s consistent with past incidents in which they’ve confiscated splitters in pre-race inspection. But here’s where I do see some sort of inconsistency. If you’re late for pre-qualifying inspection these days, or if you have to go through too many times, you earn a warning that costs you choice of pit stall. You tweak a part that leads to getting it confiscated by NASCAR before the race and nothing else comes of it? Don’t you think that’s a little strange? It’s like getting no jail time for stealing the crown jewels while spending a year behind bars for swiping a Coca-Cola.

Conjecture as to what JGR did would calm down, of course, if NASCAR would come out and explain why there was no penalty in this situation. In the NFL, for example, should a penalty flag get thrown, video replays combine with an officials’ explanation as to how a team didn’t play by the rules. NASCAR has gone a long way in becoming more transparent in recent years – simplifying and publicizing the rulebook is one such example – but it needs to get better at explaining why they’ve made decisions.

No longer can incidents like this one end with “no penalty” and nothing more. No longer can there be an appeal and the three-member panel gives no explanation on why they’ve made their decision. Could you imagine if a lawyer looked up an appeals case and the only written explanation was “decision affirmed?” They would go nuts. Yet NASCAR expects everyone to digest the rules as if we’re two-year-olds that disobeyed Mommy’s orders not to play in the kitchen. Sorry, when dealing with adults in this Information Age you need to overexplain, not underdeliver. Fans are intelligent enough to know why. They need facts and not silence as answers to their questions.

That said, do I think JGR’s splitter issue is a big deal in the long run? No. NASCAR took the parts in question long before the race and forced the teams to find legal replacements. But I won’t ever know how much we should have cared or whether that opinion is right because NASCAR hasn’t provided an explanation. Why they took the splitters will always be a mystery… and there should be nothing mysterious about their decisions.

Did You Notice? Silly Season has slowed to a crawl, creating the fewest changes in recent memory? Now that the musical chairs have stopped, resulting in the dissolution of Michael Waltrip Racing, there’s only two official driver changes in place for 2016. Clint Bowyer is replacing Justin Allgaier over at HScott Motorsports while Chase Elliott moves into the No. 24 car vacated by a retiring Jeff Gordon. All other major free agents chose to remain with their current teams rather than moving on and testing the waters elsewhere.

That lack of evolution in the form of few new opportunities hurts the sport more than it helps it. One of the reasons the NFL has become a year-round obsession is the way players move around through free agency, the draft and how teams are constantly retooling. NASCAR can only market offseason storylines so much if every driver, every team, is going with the status quo to hit the reset button come February.

Franchising, while filled with pros and cons, also helps contribute to the downside in this case. How can a new owner come into the Cup Series when the medallion program remains undecided in mid-November? How can drivers like Ryan Blaney plan their future and talk to sponsors with a giant unknown of if their team will have a guaranteed spot or be forced to qualify on speed every week? With potentially four spots available in a shrunken, 40-car Cup field? Forcing owners to “buy in” will also limit the ability for an independent to just randomly show up and qualify every week. It’s not like that’s been happening recently anyway but stabilizing the rides also limits spontaneity.

It’s a tricky balance because there is a need for established owners to feel like there’s a safety net, ensuring some value for their team in case sponsorship or competitiveness evaporates. But NASCAR, in some ways, needs to shake things up and this is the one area where they can be afford to be less stable. New people create new buzz. New employers create new storylines. Old partnerships… become old over time. It’s just reality.

I did notice the “splitter issue” with Gibbs was really a non issue, like Penske a couple of months ago…but when Penske did it, the media that day and the bias was front page everything, that Penske was trying this and that. They said everything was “in tolerance” and in no way indicative of any wrong doing, but they took it anyways, too close for what they like. Well is it in spec or not, apparently is was..but that still wasn’t good enough. That was the story for that weekend. Gibbs this weekend…crickets compared to the horrible Team Penske. One doesn’t have to look far to validate….but…what fun is that!!!!!!!

Give it a rest already.

Golly gee Davey…why don’t you give your eyes a “rest” and quit reading what I write. I ain’t gonna stop on your say so or snide comments. So rest those eyes, and ignore me! SMH.

I think only the TV coverage has the power to reign in some of NASCAR’s shenanigans. Way back we saw two similar self induced spins with Menard and then Bowyer. Only after the broadcasters called out Bowyer was NASCAR forced to deal with the issue. I remember Rusty Wallace and Jamie Little in particular. There must be a clause in the TV contracts that protects NASCAR from being held accountable.

Why would anybody think that the current teams, specifically the megateams, want any new teams to enter the sport? That wouldn’t help their bank balance would it?

To be honest, the lack of “silly season” activity emphasizes the lack of growth within the Cup series. No new sponsors, teams not growing or expanding. MWR is going out of business, 200 people out of work. When the sport was in it’s “spurt” 15 years ago, there were a number of sponsors coming into the sport and new teams coming into the sport. That has stopped. I’m not sure if Nascar is ignoring that or they just don’t want to address it for vanity purposes. But the fact is the Cup series as far as the teams and personal is not growing. And any business that is not growing, is heading for trouble.

NASCAR ignores everything they don’t want to see or hear. I agree with you, Mike, that the lack of silly season is because there is no room for movement in the Cup series as it currently exists.

The tracks are removing seats, Daytona built its version of Disneyland and took seats out, tv ratings are down, down, down and yet, according to NASCAR and its PR people, everything is fine and the fans all love things just the way they are. Ask the drivers – they’ll tell you. ha, ha, ha nope, they too will toe the party line rather than be punished by NASCAR either publicly or privately.

why does NASCAR do anything? That is one of the mysteries of the universe it seems.

The rise of “cord cutting” is why NASCAR and other sports are getting mega TV deals. Live sports is one of the last things that loses something when you DVR it. I expect more cable networks overpaying to put events on cable. Look at the College Football playoff. It’s all on ESPN.

I think any bump in the ratings is attributable to people tuning in to see the final races of Jeff Gordon’s career, not the manufactured Chase drama.

Imo JGR should have been penalized. I am seeing everyone attempt to compare this to the Penske MIS issues. To the best of my knowledge the two are very dissimilar. To my knowledge, the Penske crews “cleaned” the underside too copiously & ended up with splitters that were too thin. Where-as, from what I gather, the JGR crew added material & built aero contours on the bottom of the splitter, by hand, with illicit substances. This would seem to be an attempt to make the underside of their splitters similar to the aero contours that are permissible in other race series. Perhaps like diffusers on sports cars.
I certainly can not understand how this was not at least a minor penalty. Imo: P2, 50K (3x), CC (x3) 1 race suspension & probation to end of season, no points deductions. Depending on exactly what was done, it would seem to easily fall in a major infraction category. After all, they did attempt to enter the race with prohibited splitters. We recently saw the #33 CWT truck with get a P4 for window mounting that included $10K fine, CC 3 race suspension & probation & 25 owner & driver points. Which was apparently a prohibited use of an existing & rules conforming mounting bracket in the undercard series. Where-as, JGR crew spent un-told hours hand fabricating knowingly non-conforming implements in the premier series.
In fact, by giving no penalty, it promotes this sort of stuff. So this will be a continually explored gray area that, I think, will be manipulated (by teams) & scrutinized (by Nascar) in the near future (aka: Phoenix & Miami).

I’m not really sure that the silly season issue is that big of a deal. Sure, there has been little movement of drivers, but to be honest not that many driver contracts were up for renegotiation this year. I don’t know if drivers are getting longer deals or if this is just a slow year for contract renewals. Next year we may see more changes than normal, but it’s hard to say if this is a trend yet.

Was it bondo, or perhaps maybe magnets to modify the splitter….. oooops that was for the spacer on the accelerator pedal for the dyno test on a JGR car some time ago. My mistake. Sorry, but it seemed it was kinda quiet back at that time too.