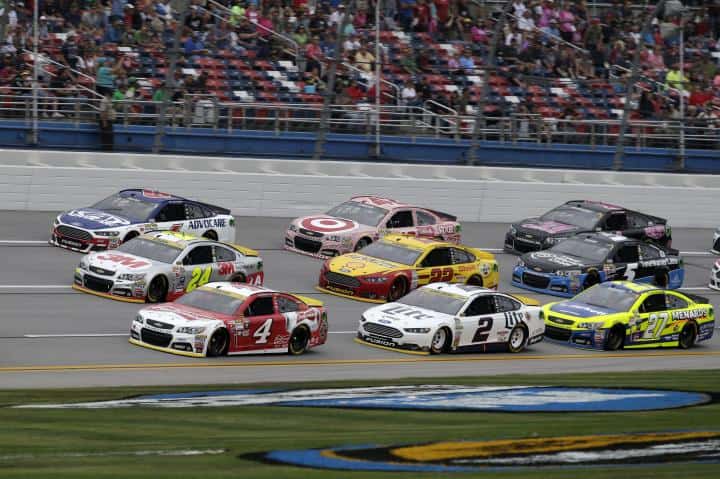 With no penalties issued and another slew of drama at Martinsville Speedway, Kevin Harvick appears to have gotten away with the ultimate checkers-or-wreckers move at Talladega Superspeedway – taking out multiple drivers in a race-ending wreck and advancing in the Chase because of it.

Harvick now goes into Phoenix International Raceway, a track he’s conquered four straight times in the NASCAR Sprint Cup Series, looking good to make the Championship 4 on points or with a victory on Sunday.

With the final race of the 2015 season quickly approaching, Harvick’s played all of his cards right for the second consecutive season.

While the former replacement for Dale Earnhardt has slipped largely under the radar in the weeks since his Talladega debacle, competitors that were wronged by his actions still have their wrecked racecars fresh in their minds. No driver paid Harvick back at Martinsville, but the opportunity still remains for someone to steal the veteran’s championship hopes away from him at his best track.

There’s little talk of such retribution occurring at Phoenix, but the possibility still exists, and with only a slim advantage over fifth-place Carl Edwards in the standings, Harvick has little margin for error.

Harvick has laid his cards out on the table. Has he played a championship hand, or will someone give the veteran a bad beat?

Should A Driver Crashed by Kevin Harvick’s Late Moves at Talladega Pay Him Back at Phoenix?

Opinion One: No. That’s ridiculous.
By Aaron Bearden

There might still be a smattering of upset drivers in the garage area after Harvick’s race-ending crash at Talladega Superspeedway, but the concept of someone giving Happy retribution at this stage is ludicrous.

Harvick enters Phoenix International Raceway as the clear favorite to win after recent domination at the track, so competitors may find difficulty drawing close enough to the Californian’s bumper to make anything happen. But even if they do, wrecking the defending NSCS champion at this stage would be unfair.

If any of the drivers taken out in the closing stages of the CampingWorld.com 500 had a score to settle with Harvick, the venue to do so was Martinsville, a commonly known location for payback, whether justified or not. The track offered the safest location to make a statement without major risk of injury, as proven by Matt Kenseth’s punting – both physically and metaphorically – of Joey Logano as retribution for an incident between the two at Kansas Speedway. Phoenix, while slower than many tracks on the schedule, doesn’t offer the same safety for a driver in the event of a wreck.

Aside from the fact that it’s too late for retribution, the main reason that Harvick shouldn’t suffer is this: the wreck wasn’t his fault. It’s just another unintended consequence of the new Chase format. NASCAR itself is to blame.

Harvick’s actions – which were never found to be intentional, mind you – were at worst committed out of necessity to advance in NASCAR’s mocked attempt at a playoff. A similar action was not only permitted, but also praised by the sanctioning body when Ryan Newman forced Kyle Larson into the wall last year at Phoenix to advance to the Championship 4.

The new Chase format, applied for the first time last season, has produced its fair share of the Game 7 moments NASCAR was looking for when they implemented it. Brad Keselowski’s drive to victory at Talladega and Harvick’s domination of Phoenix immediately come to mind. However, the desperation created by the system has also led to its fair share of embarrassing moments for the organization and its fans.

Much like the bleak moments in the closing stages of a playoff loss often cause professional teams in the NFL, NBA and other sports to erupt into a series of hard fouls and fights, the moments of desperation and frustration have pushed seasoned veterans of the series to the brink, causing fights among the drivers and their fervent supporters on a near-weekly basis.

First, there was Keselowski vs. Jeff Gordon, then came Harvick vs. Jimmie Johnson. Kenseth vs. Logano quickly followed suit.

While the regular season brings little drama, the Chase offers more emotional roller coasters than a soap opera or an episode of WWE Monday Night Raw. With a playoff system equivalent to forcing the 16 NBA playoff teams to square off on the same court while the other 14 teams fill in the remaining open court, anything can – and often does – happen.

Given the ramped up intensity and level of competition, Harvick’s actions were justified. The Stewart-Haas Racing driver did what he had to do to not out of anger, but out of necessity to advance to the next round of the Chase.

For better or for worse, NASCAR’s championship format has made it not only acceptable, but also understandable for a driver to take out half the field to beat out four drivers in points.

Those who fell victim to the act have every right to be upset, but their anger shouldn’t be directed at Harvick. The frustration should go to the organization that makes such acts justifiable.

Opinion Two: Yes. Harvick Deserves to be Taken Out.
By Sean Fesko

What Kevin Harvick did at Talladega was much, much worse than Logano spinning out Kenseth at Kansas. While Logano’s contact caused nothing more than a lazy spin in the turn, Harvick’s turning of Trevor Bayne sparked a multi-car wreck that tore up equipment, significantly altered the Chase grid and robbed the fans of a green-flag finish.

Had the incident not happened, we might’ve seen Dale Earnhardt Jr. in this round instead of Harvick. Perhaps we’d see another different driver in this round, owing to the unpredictability of Talladega. The wreck had big implications, much bigger than Kenseth spinning at Kansas.

Which is exactly why someone will move Harvick into the wall during this weekend’s race at Phoenix.

The first two names that come to mind are the ones who lost their best chances at advancing: Earnhardt and Newman. Earnhardt, following the race, said that, “I’m not going to be too upset about it.” But Newman might not be so civil. He’s notoriously tough, not afraid to get physical to get what he wants – remember his move on Larson in last year’s Phoenix race? Might he do the same thing to Harvick?

And if so, he’ll have to contend with other drivers mad at the defending Cup champion for his move: Denny Hamlin, Bayne, David Gilliland and, if he were racing this weekend, Kenseth.

It’s no secret that drivers will exact on-track payback for a wrong — perceived or real. Harvick’s move, while never proven, is not quintessential racing, something on which both Brian France and Kenseth can agree. The words “driver’s code” could very well make another appearance this weekend because, while NASCAR didn’t believe Harvick manipulated the outcome of the race, many drivers do.

And when it does happen, expect a lot of happy drivers and crew members in the garage. Take a listen to the reaction from the drivers at Martinsville regarding Logano’s wreck.

There’ll be a penalty levied, no doubt. But unless you’re currently alive in the Chase, who cares? The precedent, a two-race suspension, will most likely be reduced to one to avoid carryover into 2016, and probation is a slap on the wrist anyway. If those are the stakes, why not take the championship chances of a driver that many feel doesn’t deserve to still be in contention?

And perhaps there’s an ulterior motive for revenge, even if the drivers don’t realize it. Perhaps by self-policing races under the guise of the driver’s code, picking and choosing who moves on in the playoffs, the drivers will force NASCAR’s hand to reevaluate the Chase.

NASCAR felt as though it lost control when Kenseth spun Logano, but what if more and more drivers take matters into their own hands? NASCAR told them to “have at it,” after all. When NASCAR realizes such shenanigans seldom pop up during the regular season but only come Chase time, might it seriously consider dropping the Chase?

It would mean a return to the sport’s roots, that’s for sure. But if there’s anything we’ve learned the last couple of years, it’s that tradition is the lifeblood of this sport. NASCAR has tried to grow its younger fanbase to mixed results and found itself losing longtime fans. Perhaps this is just what is needed to reinvigorate the long-timers. After all, the best way to grow a business is to have your most loyal customers evangelize the product. If you can recapture their attention, you’re well on your way to growth.

It all starts with a spin, though.