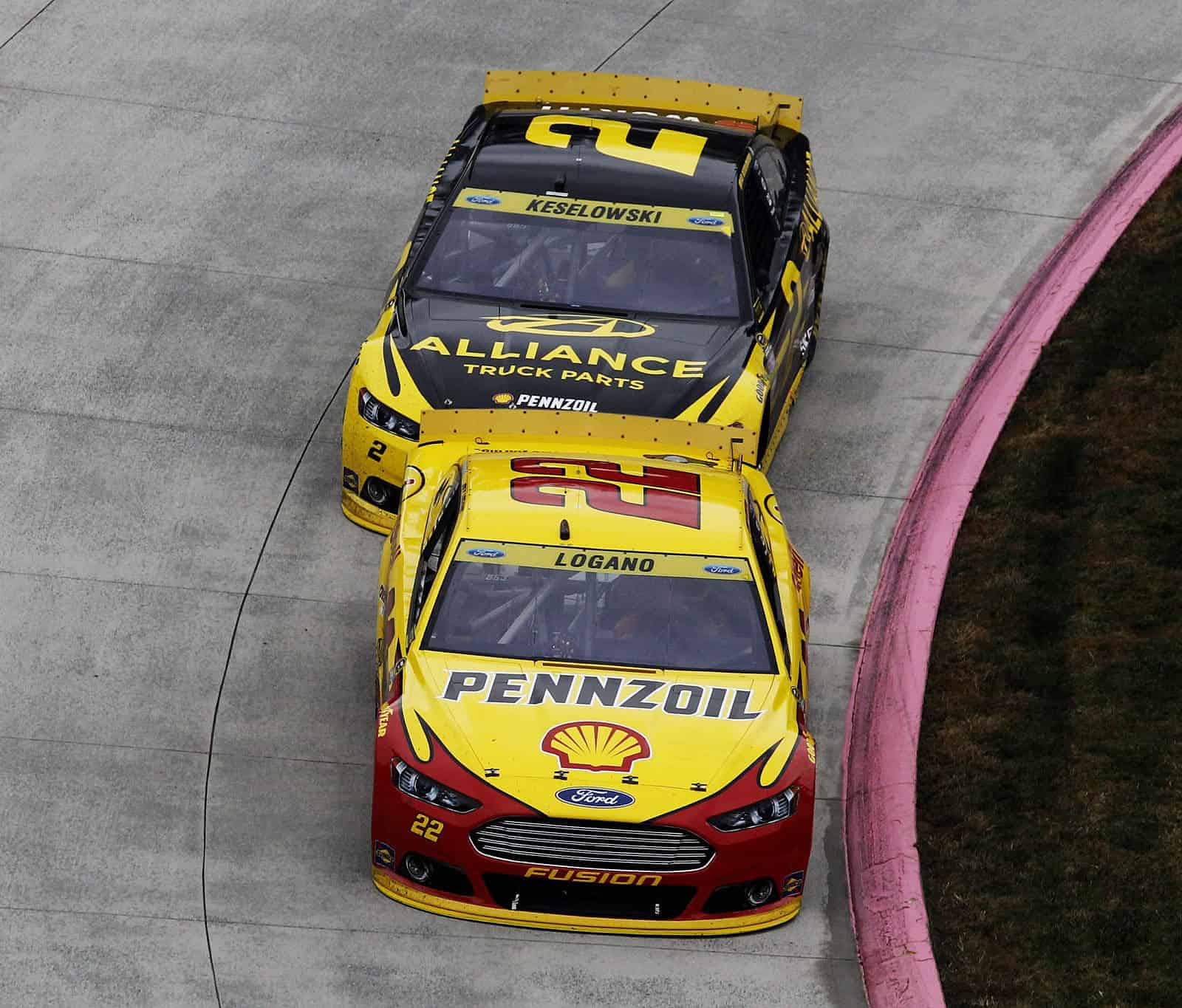 During the brouhaha over the Matt Kenseth–Joey Logano dustup two weeks ago at Martinsville Speedway, Kyle Busch said something that was largely overlooked in the aftermath of the incident: That it’s not just about what happened, but whose names were over the doors on the cars involved.

And it was easy to push the statement to the side; Busch has had enough issues in the past that he may be more heavily scrutinized, and that’s not necessarily wrong.

But his statement was absolutely correct. It does matter whose name is over the door.

The question is, does that have a negative impact on the sport? At first glance, it seems as though it would, and in some ways it does. But there’s more than one way to glance at the situation.

If a driver isn’t driving clean and is wantonly wrecking the competition, that should warrant heavier scrutiny the next time he causes an incident on the track. If a team is pushing the boundaries of the rules, them being targeted as the random car that NASCAR takes back to its R&D center for further scrutiny for several races is a good thing. In general, repeat offenders get more eyeballs on their behavior, and the reason is because they’re repeat offenders.

There are a couple of places where there’s potential for that negative impact, though. One is when inconsistency on NASCAR’s part is perceived by fans as favoritism toward one team or driver. Of course, that could be alleviated through consistent application of the rules, but so far that’s not happening.

Just this week, NASCAR confiscated the splitters from three of the four Joe Gibbs Racing entries prior to Sunday’s race when it appeared that the splitters had been altered with Bondo or a similar substance to get them closer to the ground. No further penalty was issued, and that didn’t sit well with some fans. The situation was not really similar to one earlier this season where Team Penske splitters were taken for being a hair too thin (which does happen with regular use); rather, these were altered to give the team an advantage.

Kyle Busch aside, NASCAR has appeared to be lenient to JGR after several inspection issues in recent years, so it’s easy to see why some think they’re not playing fair. Some cite the Toyota connection and the support the sport receives from the manufacturer, others the team owner, Joe Gibbs.

Is there merit to these concerns, or to others claiming Hendrick Motorsports (or some other team — you choose) gets special treatment? Well, maybe. Then again, others will claim that NASCAR comes down more heavily on whichever team is in the spotlight.

This is where it gets difficult for NASCAR. Penalties (or lack thereof) to big names always draw more scrutiny, and NASCAR doesn’t help its cause by not explaining why it makes the decisions it does. Overall, the perception of favoritism is a blemish on the sport, and in this case, NASCAR doesn’t do much to avert it.

The other side of the coin here lies among race fans, and that makes it trickier to navigate, because where NASCAR is supposed to be impartial, fans are most definitely partial. They should be; they’re fans and they all have their favorite drivers. But it paints the sport in a less-than-flattering light when fans who say they want consistency really don’t.

Fans are always going to take the side of their driver in an argument, and that’s one reason why race fans are a great group.  But in a situation like Martinsville, there is a bit of a double standard. It’s hard to imagine that, no matter what went down at Kansas, if instead of Logano the other party had been Dale Earnhardt Jr., Jeff Gordon or one of a handful of others, the reaction would have been the same as it was, whereas fans by and large supported Kenseth. And while Junior Nation can argue that its driver would never have done such a thing, there are no guarantees in racing. The cleanest drivers can get into someone and make them mad enough to retaliate.

And here’s the thing: Either Logano’s pass at Kansas was a racing deal or it wasn’t. Kenseth’s payback at Martinsville was over the top or it wasn’t. The name over the door shouldn’t matter here when it comes to penalties; the penalty should fit the infraction when all is said and done. That’s not the same as scrutinizing someone more closely after such an incident, which is likely to happen and if it prevents further issues going forward (further infractions while under probation, of course, should have increased consequences).

There’s no doubt that some drivers and teams are watched more closely than others based on prior conduct. That’s not a terrible thing; if they are caught bending another rule, the punishment fits the crime and the next guy who breaks the same rule gets the same punishment. Where it hurts the sport is when NASCAR applies the rules differently for different situations without explanation.

It’s also a black mark when fans call for different punishments for different drivers for the same infractions. That’s not going to help NASCAR be more consistent. If anything, it validates NASCAR’s inconsistency. That’s where the problem starts.

Does the name over the door matter? Yes, but it’s how people react to that name that tarnishes the sport’s integrity.

Yes, I believe the name over the door does matter sometimes, but in many cases it reflects a cumulative appraisal of their past behavior (as it should).

Yes, NASCAR is inconsistent beyond the definition of the word “inconsistent”. I don’t think that there is actually a word in the dictionary that defines the degree of inconsistency associated with NASCAR’s governing body.

Yes, fans are blind, defend their driver, and want the rules to bend both ways to the benefit of their driver and detriment of those they don’t like. I don’t believe that there is one objective NASCAR fan anywhere. What’s worse is, I don’t think many fans even try to be unbias.

“I don’t think that there is actually a word in the dictionary that defines the degree of inconsistency associated with NASCAR’s governing body.”

Sounds like a fun challenge. Just a few leap to mind:

Random
Incoherent
Monte Carlo-esque (ok I made that up)

Tarnishes the sport’s integrity? Amy, how much integrity is left in NASCAR? They’ve done so much to remove any integrity from the sport. As an example one only has to look at NASCAR’s implementation of the Chase, a playoff system that is nothing more than a game of Bingo with race cars. It doesn’t reward the driver with most wins, nor the most consistent driver, both of which are considered by most fans to be important in determining a racing champion.

Speaking of rules inconsistencies one only has to look at the absurd penalty placed on part-time team owner Carl Long in 2009 for $200,000 and suspending Long along with his wife and crew chief for 12 races (roughly 3 months) for an engine that was oversized by .197. Compare that to Michael Waltrip’s incident with 2007 manifold incident at Daytona where NASCAR fined David Hyder, his crew chief $100,000 and suspended him indefinitely. Waltrip was docked 100 owners points. David Hyder was back working with as a crew chief at the end of May, so what’s that? About 2 months? How’s that for consistency?

The one thing that we all know is that the only thing consistent in NASCAR is its inconsistency.

I try to be unbiased… I’ve been around a while and most of my favorite drivers are dead or retired. I have a current favorite, Brad Keselowski, but even so I will call him out when he is wrong. For instance, I’ll be the first to say he has no business running in the Xfinity series as often as he does, and sometimes he can be over-aggressive in his desire to win. When the issue is black and white, it’s easy for me to be unbiased. However, a lot of on-track incidents are not so clear, and sometimes a bad move by a driver wasn’t personal, it was just ill-advised. Drivers are people and people make mistakes. We don’t always know why an incident occurred or what the driver’s true intent was. We speculate a lot, and that’s when our bias really shows. It happens a lot in racing, but it happens in other sports as well… were those NE Patriots footballs intentionally deflated and if so was Tom Brady to blame? Again, we speculate, but only Tom really and truly knows. If you’re a Patriot fan, you probably feel differently than if you’re a Colts fan.

I think when it’s clear that there was intent by a driver to wreck another driver and end his day, Nascar should take strong action, and that should be treated much differently than when a driver makes on-track contact to win a race but when there was no intent to wreck him. Intent, severity and history should be the determining factor when penalizing a driver, not the name over the door.

I too try to be unbiased. I really don’t have a favorite driver although I do follow Aric Almirola (and that may be a hold over from the Petty days). Normally my comments are reserved for the idiotic decisions NASCAR makes.

It’s not the name on the door. It’s the name in the list of owners and only one matters to Brian.

I wonder what Brian thinks of DraftKings now.

I can think of a few words but I try not to use them in public.

Bill, wait until next year when we don’t have any driver that we are cheering for — then we can be unbiased!