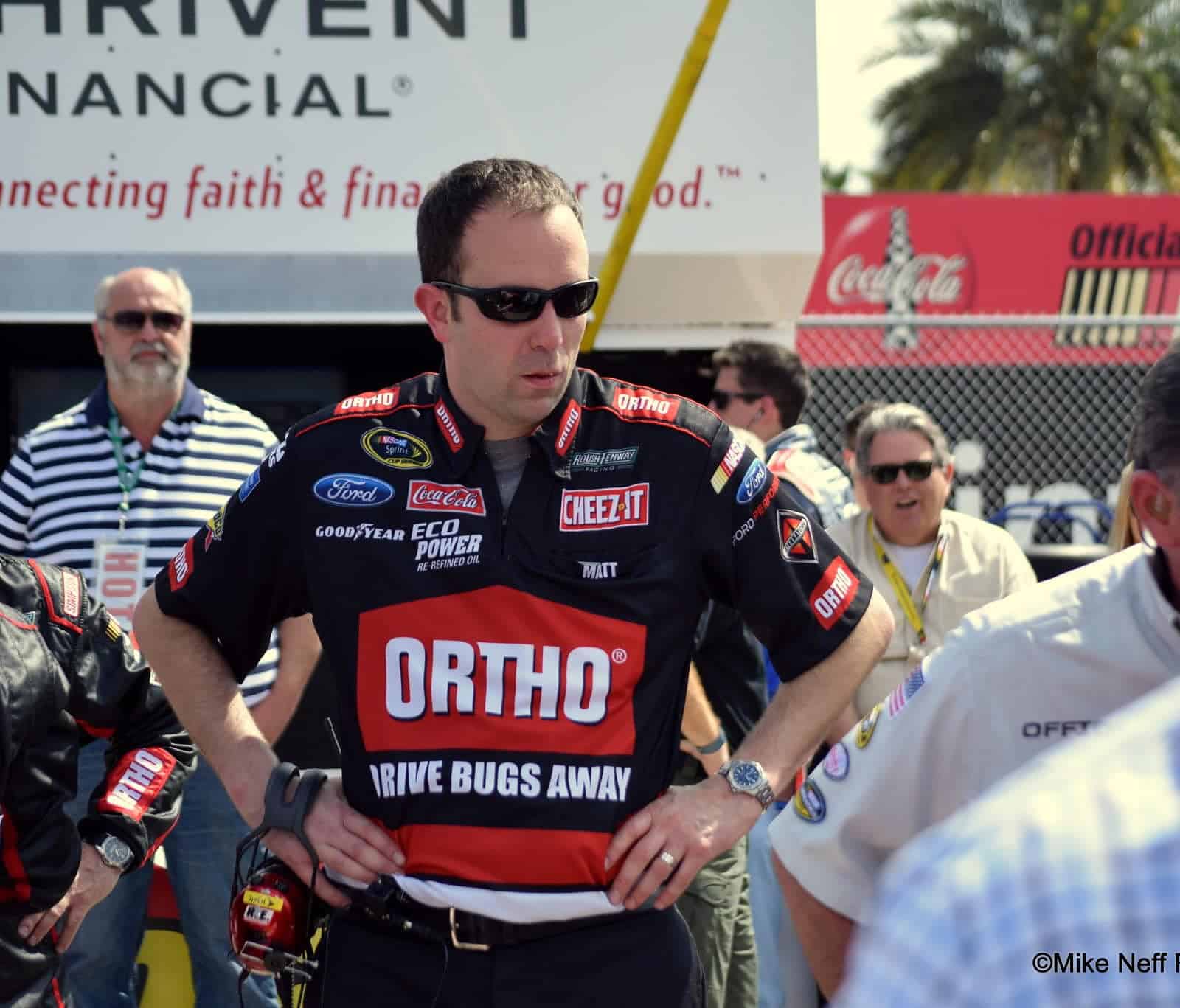 The season is winding down, and teams who aren’t in contention for the NASCAR Sprint Cup Series title at Homestead-Miami Speedway are already starting to get ready for 2016. That is especially true for Matt Puccia, who switches to a different role next season within the Roush Fenway Racing organization after serving as the crew chief for Greg Biffle and the No. 16 team.

But for now he’s focused on getting ready for Phoenix International Raceway, Homestead and the challenges that each of those tracks present — like sun on Phoenix’s frontstretch, sand (they’re racing in a desert, after all) and much more.

Mike Neff, Frontstretch – There was a handful of teams that had tire issues at Texas, your team included. Leading up to your tire problem, did you see anything that might have hinted at a potential failure or did you run over something like it seemed that several people did?

Matt Puccia – We had one come apart. I was surprised because I was talking to people earlier in the week who asked me if I anticipated any tire problems at Texas. Judging from past history I just didn’t see having a tire issue going into this weekend. A lot of guys had tire failures and it ended up biting us at the end of the day. Very unfortunate, but it is what it is.

Neff – At least early on it seemed like it was left side tires having more issues than rights. That was an issue at Martinsville, but that tire is significantly softer than the rights at that track. Was it something about the left-side wear or was that just a coincidence?

Puccia – I didn’t see any wear issues with the left sides that would alarm me. I really don’t know. The left sides for our car all looked really good. The right sides, for that matter, looked really good from previous stops. I think it was just a fluke deal. I’m not sure what brought on all of the failures that we had this weekend but there sure seemed to be a good amount of them throughout the race.

Neff – Now Phoenix is on the horizon. The owners reconfigured the track a couple of years ago and gave you more room on the backstretch. Does that make it more or less of a challenge getting the car through there considering you carry a little more speed off turn 2 than you used to?

Puccia – It’s really not that much more of a challenge. The biggest thing with the dogleg is your max travel. There is a big dip I guess I would call it right in the center of the dogleg on the back. It is a bit of a challenge to keep the car off of the racetrack through there. Other than that it really doesn’t bring on any more issues for us. You carry a little more speed into [turn] 3 than we did before.

Neff – Being in the middle of a desert, you have to deal with the amount of sand that ends up on Phoenix’s surface constantly. Does that give you difficulty, from a mechanical standpoint, with brake fans and air intake into the engine and the like?

Puccia – Not really. It is definitely noticeable, but I can think of other tracks that are worse. Darlington and Atlanta, just to name a couple, with their age are worse at having sand and grit that is on the track vs. Phoenix. I don’t know why but it probably has to do with the racing surface. Since it is a newer surface it might not hold sand as much as Atlanta or a more aged track.

Neff – You’ve had issues with the sun being a big deal on the frontstretch at Phoenix in the past. With the green flag flying close to noon and the average Phoenix race lasting close to three hours, will you get through before it is a problem during the race this time around?

Puccia – It always is an issue there. When you come down the front straight, the sun is right in your eyes. It won’t be so much in the race as it will in qualifying. Usually, during qualifying, it is right around that time when the sun is glaring right in your eyes getting into [turn] 1. It messes up your braking points and, by the time you get to the point where the grandstands are blocking it, you’re past where you need to be slowing down.

Neff – When dealing with the sun for your driver, we’ve seen people put duct tape on the windshield and have had some use tinted visors. Is there any kind of tinting visors like they have with glasses these days?

Puccia – Tear-offs is the biggest thing. A lot of people put tinted tear-offs on their visor. Some people put tape on the inside of the windshield, but there really isn’t anything you can do about it. The sun is glaring right in your face when you come down the front straight at Phoenix. You can do some things to mask it and help it, but in the end it is going to be an issue that everyone has to deal with. Some people will deal with it better than others.

Puccia – Yeah, you carry more speed off of [turn] 2 for sure. There is a little more banking there and, usually if you get the car good in [turns] 1 and 2 you’ll be too loose in [turns] 3 and 4, especially off of turn 4. There is definitely a compromise and a juggling act going back and forth between the two ends of the racetrack. Usually you lean toward the side of getting the power down off of [turn] 4 because that is where you’ll set up most of your passes. Getting the run off of [turn] 4, being able to get in the gas and stay in the gas there is the most important.

Neff – The backstretch has that enormous apron the track hasn’t painted yet. Drivers are who they are; they’ll run anywhere there is pavement if they think it will give them an advantage. Is that something you can plan for, or is it a matter of Greg is on his own if he chooses that path?

Puccia – Usually, if you end up going down there you are asking for some trouble. The transition getting back onto the track can be pretty rough. It is pretty much go down there at your own risk. If you can get a good run off of [turn] 2, you might be able to make it work. I have seen very few times where it is advantageous to go down there and make a pass.

Neff – The digital dashboard is continuing to be tried and refined. Have you narrowed down on your configuration or are you holding off until next season before you work on it?

Puccia – We ran it at Talladega. I was very encouraged by what I saw there with the dash. NASCAR has put some restrictions on what we can do with it this year. Right now all we can see with the dash is what we have access to right now. The temps and the RPMs are all we can currently view. We’ve gotten a pretty good feel for what we need next season. We’ve had an opportunity to look at what issues we have with it. Something as simple as glare on the dash.

It is good we got to run it at Talladega and saw what we had for a day race. We’ll run it at Homestead next week and get a feel for what it looks like for a night race. We’ll see if we have any more issues. We’ve tweaked on the electronic side of it to see if we can make it a little better for us for next year, so that is a bit of a head start.

Neff – The 2016 rules have been announced. What kind of development is Roush Fenway doing as far as getting cars ready for next season?

Puccia – The rules package is out. We had an opportunity to see what it was like on the racetrack at Darlington and Kentucky this year. We’re going to have a similar package to that next year. Our teammate, the No. 17 car, was able to do the test at Atlanta for Goodyear last week. I feel like we’ve got a bit of a heads up as to what we have to work on in the offseason, leading into next season. It should give us a little bit of a headstart.

I feel pretty optimistic about this package helping us out. I feel like our cars raced a little bit better when we went to this package earlier in the year. I’m encouraged about that. I think we know what we need to work on in the offseason. That is what we’re gearing up for right now.

Neff – Speaking of the offseason, is there any downtime after the checkered flag flies at Homestead or are you right back at it Monday morning getting ready for 2016?

Puccia – As far as me, I have a lot of work to do. I don’t anticipate any real down time. Thanksgiving is in there and a little bit of time at Christmas but I think it will be pretty hot and heavy once the checkered flag drops at Homestead getting ready for next year. With everything that is changing for next year and all of the rules changes I really don’t envision a lot of downtime.