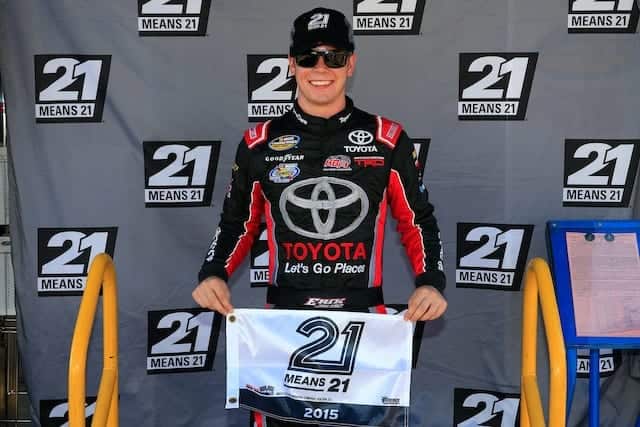 For a series-high fifth time this season, Erik Jones will lead the NASCAR Camping World Truck Series field to the green flag. The current championship points leader with two races remaining in the season won the pole for the Lucas Oil 150 at Phoenix International Raceway, setting a fast pace of 26.179 seconds in the final round of qualifying.

Leading the championship battle, Jones holds a 17-point advantage over reigning back-to-back champion Matt Crafton heading into Phoenix. Coming off a dominating win at Texas Motor Speedway – leading 117 of 147 laps en route to victory – the Kyle Busch Motorsports driver is looking to hold off the veteran to hand the organization its first drivers title. Crafton will start fourth at Phoenix, searching for his first win at the 1-mile oval.

Jones is running triple duty once again this weekend. He will be in the No. 20 cars in both the Xfinity Series and Sprint Cup Series, replacing a suspended Matt Kenseth for the second week in a row. Making his second Cup Series start last weekend at Texas, he finished 12th after starting sixth.

Starting next to Jones will be Tyler Reddick, who is still in the title hunt, 21 points back of the leader. With three straight fifth-place finishes, he looks to improve at Phoenix, where he finished 10th last year. Making his third career Truck Series start this weekend is 16-year-old JJ Haley, who will start third after leading 94 laps during Thursday evening’s K&N Pro Series West race before blowing a tire with six laps to go, finishing 21st.

2015 K&N Pro Series East champion William Byron will be making his series debut on Friday evening at Phoenix, driving the No. 9 truck for KBM. Preparing to run full-time in 2016 for the organization, he qualified fifth in his first laps in the Truck Series. Also making his debut is Byron’s K&N Pro Series East teammate, Rico Abreu, who will be piloting the No. 31 truck for NTS Motorsports. He will start 14th at Phoenix improving from 19th in practice.