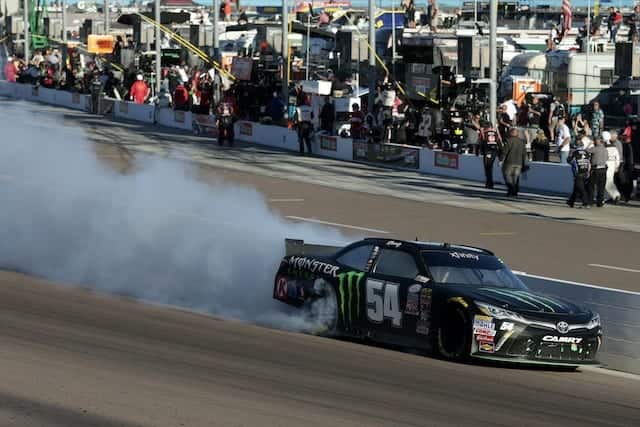 For the sixth time this season, a man by the name of Kyle Busch entered Victory Lane in the NASCAR Xfinity Series. Adding win No. 76 to his resume, the Las Vegas native dominated at Phoenix International Raceway on Saturday, winning the DAV 200.

Winning his sixth race of the year, Busch led 190 of the 200 laps at Phoenix, setting an astonishing pace throughout the day. Brad Keselowski – the only driver to lead under green-flag conditions besides Busch – finished runner-up on Saturday, three seconds behind the No. 54 car. The victory marks the 112th win for Joe Gibbs Racing in the NXS, along with Busch’s eighth at Phoenix.

Throughout the race, there were three cautions for 18 laps. After the final caution waved with just over 80 laps to go, teams were debating amongst themselves about fuel strategy. But when it was all said and done, no one ran out of fuel at the conclusion of the race as Busch eased his way into the winner’s circle.

Erik Jones had another outstanding day in the No. 20 car. The Truck Series title leader competed inside the top five throughout the day, finishing third as he looks to complete the weekend triple at Phoenix.

Wallace Jr. earned his first top 10 since Charlotte, ending the day in eighth for his No. 6 team. Running in the top 10 for the majority of the race, he had one of his better runs as of late. As he looks to solidify his plans for next season, he will head to Homestead with momentum on his side.

After nearly winning at Texas, Kyle Larson had high expectations entering Phoenix. However, the No. 42 car struggled with a loose condition on Saturday at Phoenix. Finishing 15th, he will be in the car at Homestead as he prepares to contend for the win at the 1.5-mile track following a dominating effort last year, leading 111 laps en route to a third-place finish.

In his sixth race this season, Dylan Kwasniewski had luck go against him once again. Earning another opportunity to pilot the No. 97 car, he slammed the wall on lap 59 coming off turn 2. This marks the fifth race that he has experienced issues, giving him his second DNF of the year.

With another top-20 finish, Ryan Sieg has maintained the 11th position in points ahead of Jeremy Clements. For the ninth straight race and 13th out of the past 14 contests, the No. 39 car finished in the top 20, ending the day in 16th.

Buescher’s championship appears to be all but locked in now. The 2012 ARCA Series champion is looking for his first NASCAR-sanctioned title, and it will essentially take a DNF at Homestead for him to lose the title.

Bringing back a championship to Roush Fenway Racing will be immense for the organization. Any title is always widely celebrated, but this one is different. RFR has struggled the past few seasons in the NXS and in Sprint Cup competition. Even this season, each of the team’s drivers besides Buescher struggled. Though he did not have the perfect season, mistakes were limited for the No. 60 team, giving him an edge over his peers.

As for Elliott, it is nearly time for the next step in his career. If he cannot win this year’s title, he will still move to the Cup Series with a great deal of confidence. Replacing Jeff Gordon in the No. 24 car, expectations will be high immediately. But for the second straight year, he proved to be incredibly consistent. The only different this year was that Elliott had trouble finding Victory Lane until September.

“Chris Buescher’s championship appears to be all but locked in now.” You’re kidding, right? With only an 18-point lead, there is no way in you-know-where that Buesher is anywhere near being locked in as champion, especially with three Chevrolet drivers (two of which are, in reality, Hendrick drivers) coming fast. There is no way that Buesher will close the deal, given the poor way he raced yesterday. Roush’s cars are garbage! Put money on this: Chase Elliott will be back-to-back champion.

However, what does this “championship” really matter? The series itself is a joke. Saint Gibbs Racing gives Kyle a cup car in disguise and Busch blows away the competition. Be honest NASCAR, just give the championship to the 54, and I am not just talking the owner’s championship either.