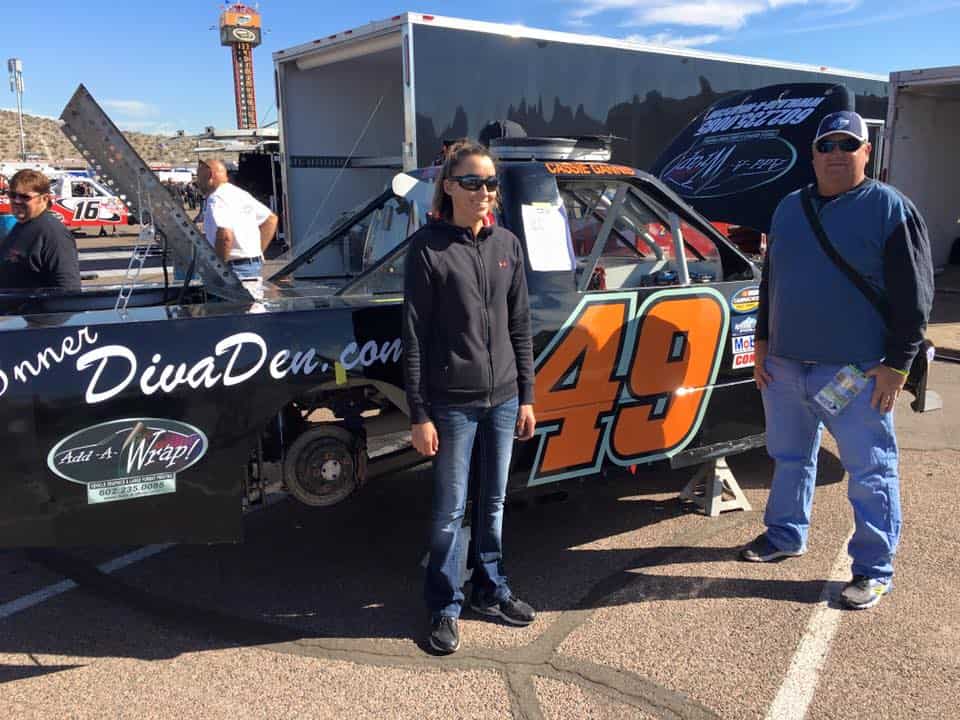 Cassie Gannis, a 24-year-old Phoenix racer, was a friendly face in the NASCAR Camping World Truck Series garage at Phoenix International Raceway, attempting to make the field for the first time in front of her hometown fans.

Gannis and a determined team of local crew members and sponsors gave it all they had in practice Thursday and qualifying on Friday. But with 36 trucks vying for 32 spots on the starting grid, Gannis, who did not have provisional points, missed the cutoff in the No. 49 truck, along with Brandon Hightower, Caleb Roark and Norm Benning.

“I only had about 18 laps of practice yesterday and unfortunately hit the wall because the setup just wasn’t right,” Gannis said. “The guys worked like crazy to get it back together, and then we got the setup okay enough to qualify, but it still wasn’t enough. I think if I had run all the laps yesterday in practice, we would have been fine.

“But I learned so much over the course of those 18 laps and qualifying. Just being in the truck was incredible. It’s definitely disappointing when you don’t make the race. It’s something you’re looking forward to at your home track. I’ve never raced a truck before, so that was an accomplishment right there.”

More recently, Gannis was signed in Feb. 2015 by Carter-2 Motorsports to drive the No. 96 Dodge at Daytona International Speedway in the ARCA Series after being approved to race at the superspeedway in Dec. 2014 during an open-test session. She ran a 50.551-second top speed at 178.038 mph in qualifying, missing the field with 10 cars entered on provisional points.

Racing since the age of 10, Gannis made a name for herself in quarter midgets, Bandoleros, Legends cars and ASA Speed Trucks. She has also competed in the NASCAR Whelen All-American Late Model Series, along with the ARCA and NASCAR.

Gannis’ goal is to compete full-time in the Truck Series next year but notes that “sponsorship is a big thing. We just have to keep looking for sponsorship. Even the Cup guys have had problems with that, and it’s hard for us underfunded teams.”

Meanwhile, Gannis uses her position as an up and coming athlete to support causes she cares about. Growing up as a racer, she overcame several health hurdles, including allergies, asthma, dyslexia and scoliosis – the latter resulting in back surgery that involved placement of a titanium plate in her back to fuse several vertebra.

At PIR this weekend and at Tucson Speedway earlier this year, Gannis participated in the Beads of Courage “Carry A Bead” Program. Beads of Courage is an Arizona-based nonprofit organization that helps children coping with serious illnesses record, tell and own their stories of courage, using colorful beads as symbols of strength, honor and hope.

As a Carry A Bead Ambassador, Gannis wore two handmade beads, pinned to her uniform during on-track activities. The beads she carried and returned will be given to Beads of Courage kids as Act of Courage beads, providing extra encouragement on tough treatment days.

“I had major back surgery and I was in the hospital for a week,” said Gannis. “But going through cancer and things like that is something you can’t describe unless you go through it. Beads of Courage really helps these kids show their courage, and it’s amazing how the Carry A Bead program encourages them. It makes me feel better knowing I am helping them out and making them feel a little bit better, too.”