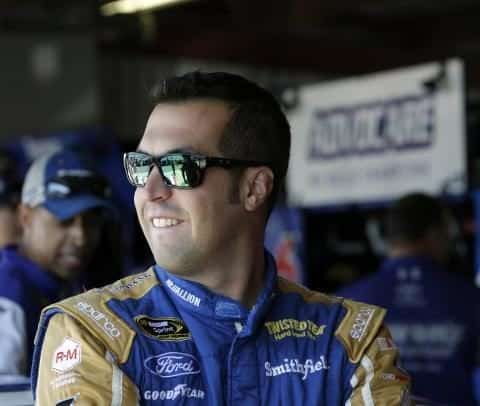 As Sam Hornish Jr. indicated to Frontstretch at Dover International Speedway in October, he will not be returning to Richard Petty Motorsports in 2016. The three-time IndyCar Series champion joined the organization this season, piloting the No. 9 car after a stint in the NASCAR Xfinity Series for the greater portion of four years.

At Dover, when asked whether or not he will return to the team next year, Hornish said: “That is something you will have to ask them.”

Hornish, 36, landed the ride with RPM after running eight races for Joe Gibbs Racing in the NXS last year, earning a victory at Iowa Speedway. Following Marcos Ambrose‘s departure to his native Australia, Hornish took over the ride, hoping to make the most of what many believed to be his final shot at racing for top 10s in NASCAR’s premier division.

“No, I don’t think so,” team co-owner Richard Petty said at Phoenix International Speedway when asked if Hornish will return. “We’ve got to look at sponsorship as much as anything else. It’s a combination deal. We can’t just go with a driver and then not have the money, and we can’t go with just the money and not have a driver, so it’s gonna be interesting.”

Hornish has three top 10s for RPM this season, including a pair at the road-course events and one at Talladega in May. With an average finish of 24.1, he has seen more consistency this year compared to his full-time stint with Team Penske, spanning 2008 until 2010. However, he is on pace to finish on the lead lap less than 15 times this year, compared to teammate Aric Almirola, who has 24 lead-lap finishes entering Phoenix.

It is unknown at this time who RPM is talking to about racing the No. 9 car for 2016 and beyond. RPM signed an extension with Ford, which could have a say in who the team selects to drive the car.

David Ragan has been mentioned as one of the top candidates for the ride. Until heading over to Michael Waltrip Racing this year, he had spent the majority of his career driving a Ford-powered racecar.

Among the possible candidates to replace Hornish are NXS points leader Chris Buescher and Brian Scott. Buescher has stated he will likely return to the NXS in 2016 with Roush Fenway Racing, but after a successful stint replacing Ragan at Front Row Motorsports earlier this year, the team might be willing to lease him to its Ford counterpart.

Scott, who has run 10 Sprint Cup races this year, has made it widely known that he is looking for a Cup ride for next year. It is unknown if Richard Childress Racing will have room to field a fourth car for him depending on what they decide to do with Ty Dillon. With sponsorship money coming from Shore Lodge, along with limited success in a handful of Cup starts, he could be the piece that RPM is looking for. Scott has back-to-back top-15 finishes at intermediate tracks in Sprint Cup competition, which has been the No. 9 team’s weakness, finishing in the top 20 twice at intermediates.

As for Hornish, his options are limited now. He had a plethora of sponsors this year, 11 to be exact. The only remaining rides in the Cup Series will likely be at BK Racing and possibly FRM depending on Brett Moffitt‘s status considering Cole Whitt is content with the team, along with David Gilliland.

If Hornish is content with dropping down to the NXS once again, his options might expand. With the possibility of Cup drivers being barred from racing in the NXS, it could leave open several top-tier seats with sponsors already in line. If not, there will be just a handful of seats, which will likely be dictated by funding.

another team going the way of what are in essence pay drivers. Drivers chosen, not for ability or even popularity, but the ability to bring sponsor dollars to the team.

CUP teams need to have driver talent currently about 30 teams greatly lack this situation.A firend of mine was so excited when Hornish returned to cup racing/.I said he wont last past this season.I said hes been here and got let go hes a great driver but hes a poor cup driver.