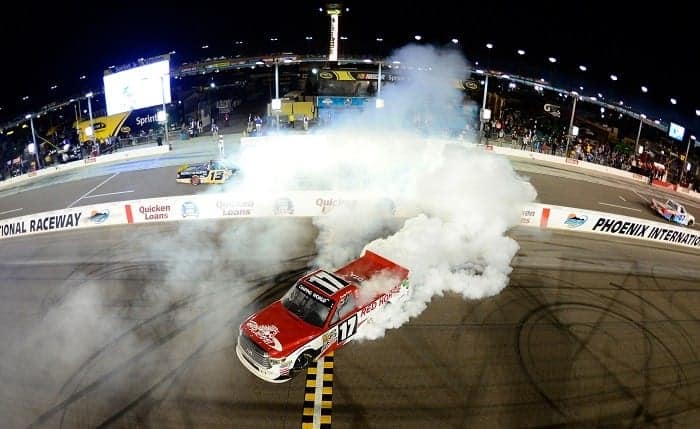 In a Nutshell: Timothy Peters took the checkered flag 0.309 seconds ahead of John Hunter Nemechek to win the Lucas Oil 150 at Phoenix International Raceway Friday night. Peters inherited the lead after Erik Jones, who had led the most laps, and Matt Crafton got together, taking out third-place driver Johnny Sauter along the way. John Wes Townley, Daniel Suarez and Tyler Reddick rounded out the top five.

Who Should Have Won: Jones was easily the class of the field, leading 106 of 150 laps after starting on the pole. But late side-by-side racing with Crafton saw the driver of the No. 88 get loose, slide up the track and send Jones hard into the outside wall, causing extensive damage to both vehicles. The No. 4 team managed to make repairs and keep Jones on the lead lap, though he finished ninth.

The formula Crafton and crew chief Junior Joiner put together to make a run on Jones for this year’s championship had come down to simple math: win. They were trying to do just that in the late stages of Friday night’s race when a late side-by-side battle with Jones saw Crafton get loose and slid up the track. The slide collected Jones, sending him hard into the outside wall before the No. 88 spun back down the track, collecting teammate Sauter in a hard hit that resulted in a red-flag period to clean up the oil and debris strewn on the racing surface.

“It was 100% my fault,” Crafton said. “Erik [Jones] and I were close, and it was tight racing. I just got loose under him and started chasing it. I touched him (Jones) and then it just sent me the rest of the way around. I hate it for all of us, I hate it for my guys, and I dang sure didn’t want to do it with the [No.] 4 (Jones), and those guys. I want to be able to see a Toyota win the championship. We’ll just hold our heads up and go to Homestead – see what we can do there to close out the season strong.”

A visibly upset Jones was more disappointed about missing out on his third straight Phoenix victory than he was about the championship battle.

“It’s unfortunate, we were racing for the win and that kind of situation happens, but everybody makes mistakes and Matt [Crafton] made one tonight,” Jones said of the late-race incident. “It cost both of us a shot at the win. It doesn’t take away from the fact that we had a really fast Tundra. I thought we definitely had the best truck here all night. Still have a 19-point lead and we can go to Homestead and have a 15th-place day — hopefully we can do that. It’s just unfortunate, wish we could have raced for the win.”

While Crafton’s crew chief tried to blame Jones during the red-flag period in an interview with FOX Sports 1, it was truly driver error that ended the No. 88 team’s championship hopes. Knowing how hard it was to pass the leader all night, Crafton knew that if Jones had cleared him, he would have most likely been chasing the No. 4 all the way to Victory Lane, and instead, he wrecked himself out of the championship battle.

Now 32 points behind Jones in third, Crafton will need a collapse of epic proportions for Jones and Reddick’s No. 19 team if he is going to win his third straight championship. And that’s just not going to happen next weekend.

Friday night’s race saw Rico Abreu and William Byron make their Camping World Truck Series debuts. And while both drivers entered the race with high hopes, neither one actually made it past 50-lap mark.

Byron, who will run the full Truck Series schedule next season with Kyle Busch Motorsports, climbed aboard the No. 9 Toyota to make his debut at Phoenix. But just six laps in, Brandon Jones moved up the track, clipping Byron, who made a strong run on the outside of Jones into the corner. When Jones spun off of Byron’s front end, he collected Cole Custer, who then turned Byron into the outside wall, causing terminal damage.

Jones took responsibility for the accident rather than placing blame on his spotter, who had cleared him just moments prior the contact.

“We had a really strong Lucas Oil Chevrolet tonight. Unfortunately, it didn’t go the way we had planned,” Jones said. “I worked on getting around the No. 9 for a couple of laps and thought I had cleared him, but he had momentum on the top. I hate that our night was cut short, but we’ve got another shot at a win next week and I know this GMS Racing team will have another fast Chevrolet for Homestead.”

Byron, while disappointed, called it “a racing deal.”

“I felt like the two of us (Byron and Brandon Jones) were side-by-side,” Byron said. “I guess he got cleared and he wasn’t clear. It’s unfortunate because these KBM guys worked hard on this Liberty University Tundra. I hate to end it this early, but I’ll keep my head up as I have a whole year of truck racing ahead of me next year that I’m looking forward to.”

Meanwhile, less than 40 laps later, Abreu became an innocent victim when Mason Mingus locked up his brakes and slid up the track into Dalton Sargeant, whose truck turned straight into the path of the No. 31 Chevrolet.

Abreu was obviously disappointed, especially since his Phoenix debut served as a chance to gain approval to run at Homestead-Miami Speedway next weekend.

“This was definitely not how we hoped my Truck Series debut would go. Someone in front of me hit their brakes too hard and slid all the way across the track, and I just had nowhere to go,” Abreu said. “It’s an unfortunate situation for us, but I learned a lot today about racing around these guys and what the truck needed to be fast.

“Everything on pit road went smoothly, which was one of my biggest concerns going into the race; we had a great stop, gained a few spots and made good adjustments that would have made us even better later in the race. I just have to thank Bob Newberry and everyone at NTS Motorsports. They built me a really fast truck and got me comfortable quickly.”

Clearly, neither driver got the run they were hoping for, nor did they get the experience that’s so valuable for a new competitor. But with that said, Byron and Abreu were innocent victims in another driver’s pileup, and based on their prior on-track performance in other series, both will be worth paying attention to when they return.

In what has become a rarity this season, 36 trucks showed up for the 32 available spots on the starting grid for Friday. Norm Benning, Phoenix native Cassie Gannis, Brandon Hightower and Caleb Roark failed to qualify.

Despite suffering radio troubles and a slow leaking tire that changed the handling on his truck dramatically, Suarez recovered from dropping nearly outside the top 20 to a solid fourth-place finish. The result marks his seventh top five and 10th top 10 in 12 starts this season.

Peters’s victory clinched the manufacturer’s championship for Toyota on Friday night. The manufacturer has scored 13 wins this year with five different drivers.

“Thank you to the good Lord for being with us tonight and for blessing us,” Peters said. “How about Toyota for clinching the manufacturer championship tonight. So great and proud to be a part of the Toyota Racing family. Thanks to Tom DeLoach (team owner), Red Horse Racing and all the guys back at the shop. What an amazing night.”

“It paid everything there to have clean air out front out there. We’ll take it, it’s definitely some motivation going to Homestead for the final race of the year.” – John Hunter Nemechek

Points Update: Jones has all but locked up this championship, barring any major disaster for the No. 4 team at Homestead. Despite the late-race crash damage, Jones walks away from Phoenix with a 19-point leader over Reddick, who moved up one position following Crafton’s DNF. All Jones needs to do to clinch the championship is have a mediocre 15th-place finish. Crafton drops to third in the standings and would need both Jones and Reddick to finish 30th or worse (read: not gonna happen!) if he were to win and lead the most laps.

Sauter and Peters, both of whom are mathematically eliminated from the championship, round out the top five. Rookies Hayley and Hemric sit sixth and seventh, respectively. Townley sits eighth, followed by Ben Kennedy. Gallagher rounds out the top 10.

Words cannot describe what I'm feeling! God is so good! Thx @RedHorseRacing @MRichmond17 and everybody involved in tonight's win!!

Good run tonight by @AndersonsMaple @NEMCOMotorsport team! Finishing 2nd is great just needed one more! On to next week! #Momentum

“Tonight was a hard fought fourth-place finish. At the beginning of the race, we had a really strong No. 51 ARRIS Toyota Tundra, but at some point it felt like something happened and the balance shifted dramatically. The face that we ended the race in fourth just goes to show that the team never gave up and worked hard all night to get us passed that finish line. I’m very thankful to everyone at Kyle Busch Motorsports for the job they did tonight. We have one more shot to get in Victory Lane this season, so we’ll work hard to make it happen next week at Homestead.” – Daniel Suarez

“We had a great effort by all our guys on the Draw-Tite/Reese Towpower/C-A-L Ranch Stores Ford F-150 and we had a really strong truck. It’s just a shame that we had a miscue there on the pit stop. We lost a few spots that really could have been important for us. Once we got back there in dirty air, you know we had just freed it up on that stop and once we got back there in dirty air I was just too free. We lost track position when we needed it the most and it cost us.” – Tyler Reddick, finished fifth

Up Next: The Camping World Truck Series heads to Homestead-Miami Speedway to kick off Ford Championship Weekend next Friday night. Last season, Darrell Wallace Jr. led just 30 laps to end his tenure with KBM on a high note; he beat out Kyle Larson, who had led the most laps by 0.293 seconds. Coverage for the Ford EcoBoost 200 begins at 8 p.m. ET on FS1; the race can also be heard on your local MRN affiliate and SiriusXM NASCAR Channel 90.