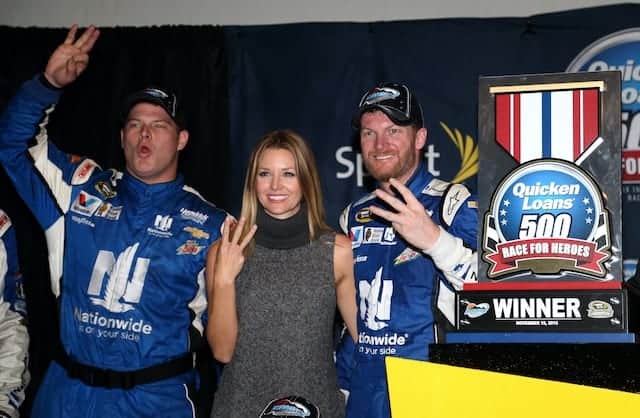 Only for NASCAR does it rain in the desert.

For Dale Earnhardt Jr., the returning rain during Sunday’s Quicken Loans Race For Heroes 500 at Jeff Gordon Raceway brought a victory as the race was officially called after 219 laps, granting the sport’s Most Popular Driver a third win at Phoenix and of the 2015 Sprint Cup Series season.

“You like to win them at the checkered flag,” Earnhardt said who completed the round sweep for Hendrick Motorsports. “A win’s a win though. You take it, put it in the record books. My team guys are very proud of this because they gave me a great car to qualify in.”

With a third win for 2015, Earnhardt points to qualifying as the reason he could take the victory.

“We’ve qualified so poorly all year,” he said. “The reason why we won tonight was because of how we qualified this weekend.”

A crash involving Ricky Stenhouse Jr. and Joey Gase brought a caution flag. Meanwhile, Earnhardt completed his pit stop and beat Jeff Gordon to the line, inheriting the race lead before the race was called.

“It is a rain-shortened race,” he said,” and I know that they’re some guys in the field that would’ve loved to see this thing get going again. If I had four-to-six inches at Talladega, Id be going to Homestead racing for a championship, too.”

When the green lag dropped approximately six hours late, Kurt Busch was given a drive-through penalty after beating polesitter Jimmie Johnson to the start-finish line.

What followed was a gallant comeback from the elder Busch who drove from last place, into the top 10, finishing seventh. The result, though impressive, was not enough to advance to Homestead.

“We’ve had a fantastic season,” he said. “We won a couple times, sat on three poles. Tony Gibson [crew chief] and the guys believed in me. We worked our way all the way to the final two races and here we are in Phoenix with Homestead next week.”

The three drivers who join Gordon toward racing for the Sprint Cup Series championship next Sunday at Homestead-Miami Speedway are Kyle Busch, Kevin Harvick and Martin Truex Jr.

For Harvick, the second and final rain storm snatched a possible fifth straight victory at Phoenix as the reigning champion led 143 of 219 laps before finishing second behind Earnhardt.

Despite the loss, Harvick will go to Homestead to defend his crown.

Truex and the underdog Furniture Row Racing team advance by a mere five points over Carl Edwards to make the Final 4.

“It means everything to us,” Truex admitted. “What can I say about the whole team and everybody at Furniture Row Racing and everybody back at the shop in Denver. A dream come true for us.

“I got a little nervous there when the caution came out on us tonight,” Truex said. “But all-in-all we did what we had to do. Homestead is a really good race track for me and that’s our kind of race track for this team.”

Kyle Busch puts the next step in his comeback story in 2015 as he finished fourth and advances to Homestead. Healing from leg and foot injuries suffered at Daytona in February, Busch gave credit to crew chief Adams Stevens.

“It was tough to be at home and laying in bed,” Busch said, “watching other guys race my racecar first of all. I can’t say enough about Adam Stevens [crew chief] and the teamwork and everything that we went through this season to being able to keep everyone together, keep everyone focused and motivated.”

With a driver in their last season [Gordon], a defending champ, a darkhorse team and a outstanding comeback in the making, Busch pointed out the storylines heading into Homestead.

“The three guys who I’m racing against,” Busch said, “it’s so cool the storylines you’re going with there. you’ve got the past champion from last year – racing against Kevin Harvick, probably the most dominate car each and every week, the most consistent car.

“You’ve got Jeff Gordon who’s got his won story of his own that he wants to put a chapter to end with. And of course, the dark horse, Martin Truex being a single-car team and being as stout as they are with Furniture Row is pretty cool to see.”

Rounding out the top-10 finishers at Phoenix were Joey Logano in third, Johnson fourth with Gordon, Denny Hamlin, Brad Keselwoski and Aric Almirola.

Earnhardt Jr. began his winner’s interview with warm words toward those in France following the devastating week in France.

“First off we want to say that we’re thinking about everybody over in Paris,” he said. “Everybody affected by the thing that happened there. Its been amazing the last couple days seeing the support that other sporting events and through Twitter and everything. It’s been really awesome to see everybody come together.”