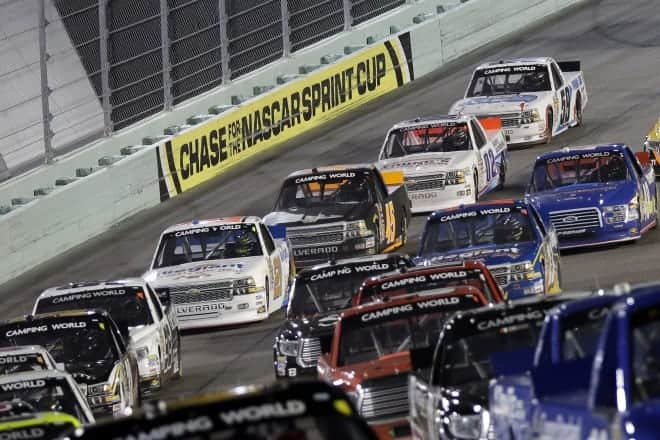 After a controversial ending in Phoenix, the NASCAR Camping World Truck Series rolls into Miami for the final race of 2015.

With his dad returning to the NASCAR Sprint Cup Series, Ross Kenseth will get back behind the wheel of an NCWTS truck. Kenseth will drive the No. 18 Toyota for Hattori Racing in the 200-mile event.

Austin Theriault will make his return from a violent accident at Las Vegas Motor Speedway in the event, driving the No. 29 Ford for Brad Keselowski Racing. The event could mark Theriault’s last start with the team – Daniel Hemric is set to drive the machine full-time in 2016.

Lira Motorsports, a regular in the ARCA Racing Series, will make a step up to the NCWTS at Homestead, fielding both the No. 58 and No. 59 in the season finale. ARCA competitors Kyle Weatherman and Dan Levine will drive the machines as the Lira team looks to gain experience for 2016.

David Gilliland will drive the No. 92. Jessie Little will make another NCWTS start in the No. 97.

The NCWTS will return to action for the final time of 2015 on Friday, Nov. 20, for a lone practice session at 9 a.m. ET. The field will return at 4:10 p.m. ET for Keystone Light Pole Qualifying. Coverage for the Ford EcoBoost 200 will begin at at 8 p.m. ET on FOX Sports 1 and MRN.