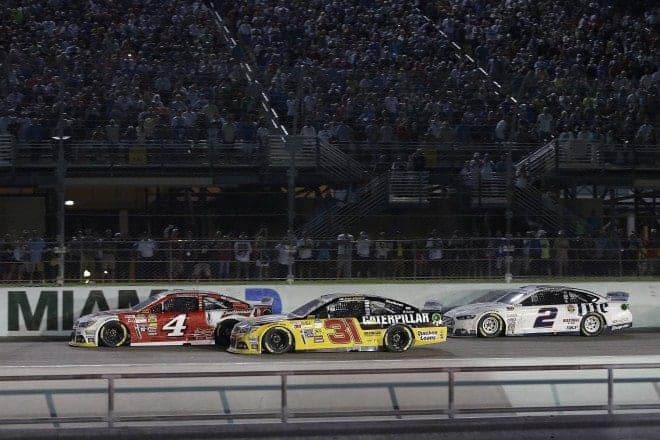 The field for the final round of the 2015 Chase for the Sprint Cup has been revealed.

Should qualifying be rained out, Ryan Blaney (No. 21) and Michael McDowell (No. 95) will be the two teams that fail to qualify for the season-ending event.

Highlighting the list are the four contenders for the Championship 4, the final round of NASCAR’s Chase. Jeff Gordon will drive the No. 24 for the final time with Hendrick Motorsports, Kevin Harvick will look to defend his 2014 championship in the No. 4, Kyle Busch will attempt to cap off a dramatic comeback story with his first championship and Martin Truex Jr. will look to finish NASCAR’s biggest underdog story in recent history.

Ty Dillon will return to the No. 33, making his final start of the season with Circle Sport Racing. Dillon hopes to compete full-time in the NASCAR Sprint Cup Series in 2016.

The NSCS will return to action for the final weekend of the season beginning on Friday, Nov. 20, for practice at noon ET, followed by Coors Light Pole Qualifying at 6:15 p.m. ET. The field will return on Saturday two practice sessions at 10 a.m. ET and 1 p.m. ET, respectively. Coverage for the Ford EcoBoost 400 will begin on Sunday at 3 p.m. ET on NBC and MRN.