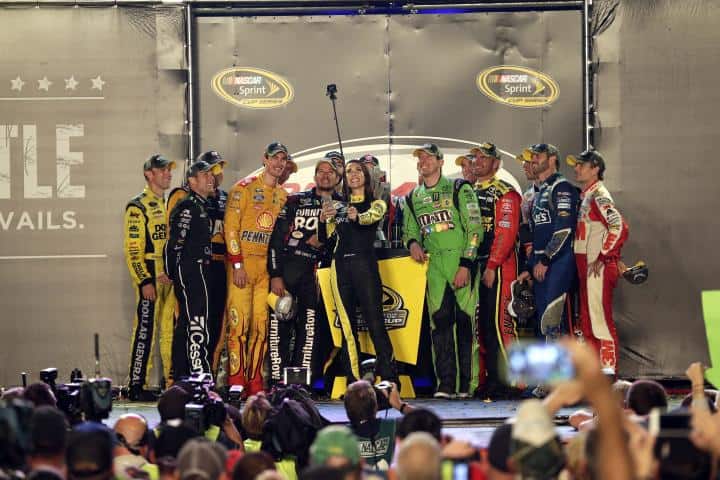 AVONDALE, Ariz. – So, now that the field is set for four drivers to do battle in the final race of the NASCAR season next week at Homestead-Miami Speedway the big questions are whether #TheChase lives up to the hype and whether this format really does build drama and put it on the same level as stick-and-ball sports.

Years ago, I wrote for a magazine covering the billiards industry. At first, you might think billiards, or pool, would be the ultimate stick-and-ball sport but it has never been viewed that way. Ever. At the time, I called the sports editor of the Las Vegas Review Journal, spoke to sports bookies and several professional athletes, and none of them could give me a reason why the sport I was involved in wasn’t viewed as a stick-and-ball sport. Of course, they had all played or attempted to at some point in their life.

It made me think, maybe, a sport doesn’t need to be compared to basketball or football or baseball or any other form of athletic activity to be enjoyed and followed by millions of people. There are obviously millions of people, who play pool. No, there aren’t that many who follow it on a weekly, or even, a monthly basis but most have heard of Earl Strickland or Jeanette Lee and, of course, Willie Mosconi ad Minnesota Fats.

Looking at it further, one might ask if horse racing is a sport. Is yachting a sport? What about curling, ping-pong or golf? Are these sports that you can compare to the Big 3? Probably not, but that’s irrelevant because they are still a sporting competition.

So, as I cover the motorsports world and follow NASCAR each week, I read the comments about this and other columns and I wonder why so many people are so down on NASCAR. Some people, who claim to be loyal fans, denigrate NASCAR to a point that, if others listened to them, they might believe it will meet its demise in the coming years, if not months.

It’s compared to football and baseball and basketball. There is criticism of how the playoffs in those sports are pure, untouched and designed to ensure the best teams make it to the end and battles for the championship but not in NASCAR. That argument seems odd to me considering a key player might have an off day and impact the final score. Isn’t that the same thing that happens when a driver has a bad day and ends up being eliminated from contention for the championship? In reality, don’t sports teams that have a winning record sometimes get eliminated en route to “The Big Game?”

What about in golf? I mentioned it above but let’s look at it versus NASCAR. In golf players are eliminated from competion just like they are in NASCAR and it happens during the match. Only certain players can compete for certain major events because they are the only ones qualified for them. Additionally, if you don’t play well-enough in golf they won’t let you play in the tournament – remember you have to have a tour card for the PGA. Isn’t that similar to what happened in NASCAR at Charlotte, Talladega and Phoenix?

This weekend four drivers were eliminated from contention for NASCAR’s final round of #TheChase. Yet, fans will most definitely rip this column apart because they disagree with my opinions on why each one of those four drivers deserves to race for the title. Some fans will say that it’s okay for Jeff Gordon to compete next week because he got a win and made the cut. To the polar opposite, others will say Kyle Busch shouldn’t be in #TheChase because he missed 11 races. Umm, need I remind you that he has four wins? That logic makes no damn sense. They both deserve to fight for the trophy. So do Kevin Harvick and Martin Truex Jr.

And before anyone says, “that’s not how stick-and-ball does it,” think about golf, or better yet, think about pool. In a pool tournament a player can miss a single ball and be eliminated from the competition. Is that fair? You may not thinks it’s fair if that person was your driver, your player or your team. But that okay because you are a fan.

What I’ve learned in NASCAR and from the billiards world is fans are rarely happy. Most think they have a better way of doing things and, quite simply, if the sanctioning body of (insert name of sport here) doesn’t do what they want then everything is rigged or the sport is going to hell or the fans are leaving in droves or, or, or… And, you know what, that’s okay. You’re a fan. You’re biased. It’s good that you have those opinions and beliefs, because others may feel differently, and that’s where rivalries are born and makes fans cheer for this team or that team or this driver, etc.

The simple truth is that NASCAR has been around since 1948 so they must have made some pretty good decisions along the way. Heading into a sold-out Homestead-Miami Speedway next week is a pretty good indication that the drama and excitement from #TheChase is holding its own against those stick-and-ball sports, so don’t look for it to disappear anytime soon.

Jerry Jordan, a Frontstretch contributor, also has his own site at kickinthetires.net.

27 thoughts on “Kickin’ The Tires: Is #TheChase Helping Or Hurting NASCAR?”