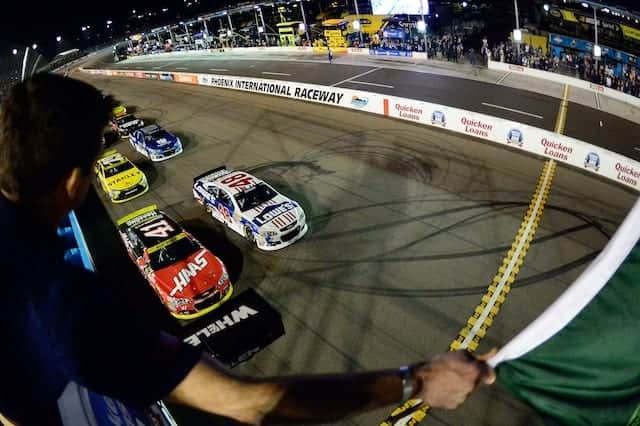 If we learned one thing this year, it’s that with the current race car configuration, it’s hard to pass. Even if you have a fast car, making a pass is easier said than done. And while both Kurt Busch and Jimmie Johnson put themselves in bad positions via penalties (Busch for jumping the start and Johnson for speeding on pit road), they earned their way back to top-10 finishes, and Johnson a top five. Busch was close to losing a lap to Johnson early, but held on tenaciously. Both he and Johnson worked their way back through the field methodically and cleanly, and by the end of the night, had something to show for it.

What… is on my mind after the race?

I know that NASCAR makes every attempt to run a race on the scheduled day, but with so much at stake, perhaps waiting until Monday, where there was just a 20% chance of rain, would have been the better option. It just rings hollow that after 35 weeks of working their fingers to the bone, four teams’ title hopes are over not because of how they performed, but because of weather and an ill-timed crash by a couple of backmarkers. That a couple of backmarkers and a rain shower could play such a role in determining who the champion will be is one of the things inherently wrong with NASCAR’s playoff system — you can’t run a race with just four or eight or 16 cars in it for any number of reasons, but the rest of the field can determine, ultimately, who wins the title.

Another thing about the rain delay: Why not talk to people instead of showing race reruns all day? I’d rather see interviews with every driver in the race first, and then race replays, but how about some races from years past instead of one we all saw last week? It would have been a great opportunity, though, to let fans get to know some drivers they rarely see during a broadcast.

If not for a speeding penalty during the competition caution, Johnson might have dominated the race after starting up front; as it was, he came from the back to finish fifth despite the rain-shortened race. Johnson and the No. 48 have shown the form that won them four races earlier this year in recent weeks.

Kevin Harvick inherited the lead on competition caution and was fairly stingy with it afterward, leading 149 laps only to lose it when it counted, late in the race, and finish second as a result, his worst result in the last four races at Phoenix. He has to be the favorite headed to Homestead.

Nobody likes to see a hit like the one Joey Gase took on Sunday night when Ricky Stenhouse Jr.got loose and slid into the No. 32, spinning Gase out. The No. 32 suffered heavy damage and Gase was slow to drop the window net, the signal that lets everyone know a driver is OK after a crash. Gase was alright, but it’s always hard to see a team as small as his tear up a car to that extent — they don’t have a fleet to choose from back at the shop, so it’s a real loss for them.

Why… did Dale Earnhardt Jr. win the race?

It sounds simplistic, but because it rained when it did. Had the race restarted, Earnhardt would have had his hands full with Kevin Harvick and his teammate Johnson before the night was over. That’s not to say a win because of rain isn’t a legit win, because it certainly is — no matter the circumstances, you have to be in the right place to capitalize on a situation, which the No. 88 bunch did on Sunday. Short of winning due to an illegal car, there are no cheap wins, and Earnhardt earned this one fair and square.

Martin Truex Jr.; Furniture Row Racing: Truex enters the final race with a very real chance at the title. It’s an interesting final four in that none have dominated races recently, but Truex has been so consistent all season that if it comes down to a top five to win the title, he could easily do it. While it’s hard not to call Harvick the favorite, Truex is the guy who’ll be lurking to take it from him should anything go awry.

Justin Allgaier; HScott Motorsports: This is the kind of finish that Allgaier has been capable of more and more this season: quietly working his way through the field into a top-20 finish before anyone sees him coming. It’s a shame he’ll lose this ride just when he was moving the team forward, but he’s got a solid NXS ride to look forward to; if he’s sneaky there, it’ll be for top fives and wins.

Casey Mears; Germain Racing: The biggest news for this team came before the race, in the form of a three-year extension with sponsor GEICO which included an extension though 2018 with Mears. This is a team on the brink — they’re making the second round in qualifying consistently and are capable of finishing in the top 20 on a weekly basis as well — they’d likely have been in the top 20 Sunday if not for getting caught in a bad spot on a pit cycle when the caution flew. Will Mears make the Chase next year without a win? Probably not, but could he pull off a surprise win? Yes.

47 thoughts on “The Big 6: Questions Answered After the 2015 Quicken Loans Race For Heroes 500 at Phoenix”