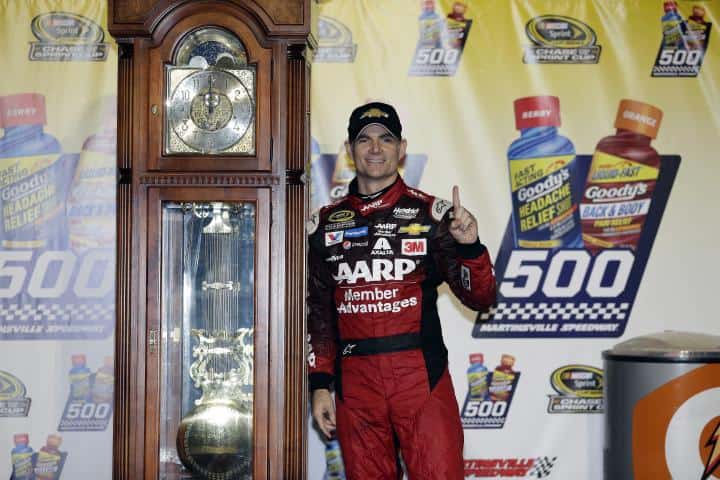 ONE: The Retiring Legend

Only NASCAR could have a six-hour rain delay in the desert. Come to California please, NASCAR; we need some rain. I am also wondering if the precipitation was anything to do with the track being renamed Jeff Gordon Raceway for the day? Either that or it was me boldly and confidently predicting last week that weather wouldn’t be an issue at Phoenix International Raceway. I’ll remove my foot from my mouth, folks, and offer absolutely zero meteorological thoughts for Sunday’s title decider.

Anyway, where was I? Oh yes, Jeff Gordon and his seemingly never ending drive for five which may just finally happen this weekend at Homestead-Miami Raceway. This will be race number 797 for Gordon; the last of a stellar, first-ballot Hall-of-Fame, 93-win career. Simply put, Gordon’s overall numbers are staggering. Alongside the wins and the consecutive race streak, Gordon has 325 top-five finishes, 474 top-10 runs, 81 poles, a remarkable 24,920 laps led, an average start of 10.5, an average finish of 12.5 and according to the ever reliable Racing Reference website, he has earned a phenomenal $151,801,848 in his 24-year career. The numbers, impressive as they are, don’t fully do justice to the role Gordon has played for the sport. A true crossover star, Gordon is one of maybe two or three drivers the average non-NASCAR fan would know (Dale Earnhardt Jr. being the obvious other one). I for one am glad he will still be involved in the broadcast booth next season – his insight will be invaluable in the same way it has been with Steve Letarte and Jeff Burton in the NBC booth the second half of this season. So the big question is: can he do it? I have to say I hope so. No, he’s not my favorite driver (just in case you were wondering), but there simply isn’t a better story for the entire sport than a Gordon title this Sunday would be. Best of luck, Number 24.

After Gordon, the next best story – and for some, the best to be fair – would be a victory for Martin Truex Jr. and the one-car, Colorado-based Furniture Row Racing outfit. The unwitting victim of Spin-gate at Richmond International Raceway in 2013, Truex has had a dream season with a win, career highs in top-fives (eight), top-10s (22) and almost laps led (564 vs. 581 in 2007). A title for him would arguably represent one of the most unlikely, if not the most unlikely, championship stories in the six-decade plus history of NASCAR. This is, you imagine, the sort of storyline NASCAR was hoping for when they conjured up this flawed new method for crowning a champion. “This is the kind of thing you dream about since you were a little kid,” said Truex in a post-race interview with NBC Sports. “Having a shot to win a Sprint Cup Series championship is just awesome, and I am looking forward to the opportunity.” And what an opportunity it is for Truex, who has persevered through a truly tough time both professionally and, more importantly, personally, with his girlfriend’s brave battle with ovarian cancer.

Kevin Harvick’s Chase campaign has been far from smooth when compared to the rest of his season but one simple fact remains: he’s made it to Homestead and he has an excellent chance of winning back-to-back championships. It seems unlikely that anyone will resort to revenge for his wrecking half the field at Talladega Superspeedway at the speedy Florida circuit, so Harvick just needs to concentrate on getting the job done and finishing above the other three protagonists. Plus, he’s been there and done it once already at the business end of the season; a point he noted to NBC Sports in the post race coverage: “It is going to make it a lot easier knowing what to expect,” said Harvick. “You just throw it all out there and go for it.” Harvick did just that to win his first title last season. Do not bet against him doing it again this Sunday. One other final point to mention on the subject of Happy: in the traditional points standings, Harvick would currently have a 20-point lead over Joey Logano. So he would just need to go to Homestead and finish in the upper 20s. For all the talk about how much folks hate the Chase, the guy with the most overall points in 2015 may very well win it all. And there’s something to be said for that.

Few would have thought that Kyle Busch could make it all the way to the final four when he exited his destroyed Camry in the Xfinity Series race at Daytona International Speedway all the way back in February. But he did it, courtesy of a four wins in a five-race streak in the heat of the summer. “It was tough to be at home laying in bed and watch other guys race my race car,” said Busch to NBC Sports at Phoenix. “We did what we needed to do tonight, and I look forward to next week.” And if he does get it done, he along with brother Kurt, would become just the second set of siblings after Terry and Bobby Labonte to win Cup titles. I’ve often heard people say that if there was one driver they would want racing for their life, Kyle Busch would be that wheelman. So with a view to Sunday’s proceedings, who better than the younger Busch brother to throw everything out there and pick up a win. Busch is often described as the “best driver not to win a title.” This Sunday afternoon he can change that moniker and make a new one: Kyle Busch – Sprint Cup champion.

And finally this week, I know we have the small matter of crowning champions at the three top echelons of NASCAR this weekend but after the last three races are in the books, and champions feted in post season ceremonies thoughts will inevitably turn to 2016. So with that in mind, what can we expect next year? For me, the biggest and I hope most positive change will be the introduction of the new aero package. We’ve seen too much processional crap (for want of a better word) with passing harder than beating up the heavyweight champion of the world armed with a spatula. Next year I am hoping and praying it will be very different. The sport needs it to be, that’s for sure.

I agree, but should Gordon or Busch need to move Harvick out of the way for a win, neither will hesitate. Not so sure about Truex, though.

Carl – I think Truex would do so as well. If it comes down to it, with a title on the line, I would expect any of the four to do whatever it takes. Who do you think wins it?

Harvick… but I hope he doesn’t.

And Then The Rest Disappear

So the big question i have is, if there is rain, how is Nascar going to handle this. Are they going to tell everyone before the race what their intentions are or are they just going to wing it based on who the championship leader is at the time. Having so much manipulation in the sport, its hard to give Nascar the benefit of the doubt that they will let the race play out naturally and let the drivers settle it for themselves. I sure hope they do but I don’t hold out much hope.