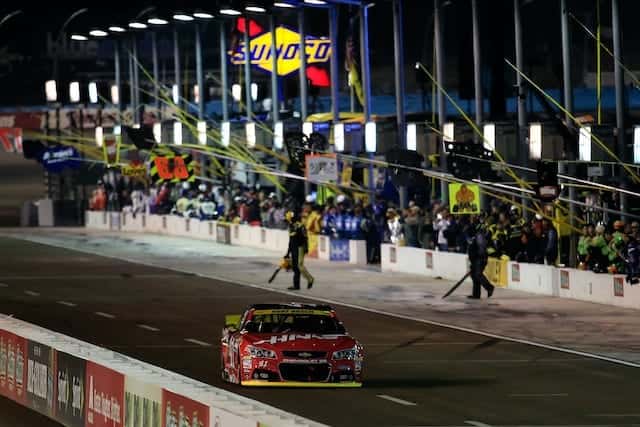 So here we are. The final weekend of the 2015 NASCAR season and man has it gone by fast. Think of all the storylines we have heading into Sunday’s Ford EcoBoost 400 at Homestead.

Remember when Kyle Busch was injured in the season-opener crash in the Xfinity Series race at Daytona? That is now nine months ago, and Busch is now one of the Championship 4. After missing the first 11 races of the season, Busch won four races in five weeks and ran so well that he was able to work his way into the top 30 in points, enabling him to make the Chase on a waiver from the sanctioning body. Busch still hasn’t won a race in the Chase but consistency has led him to Homestead. A victory would make him a champion for the first time in his career, helping seal his legacy. Busch has won 33 career races but has yet to win a championship, the most of any active driver.

Busch joins Martin Truex Jr., who a year ago sat in 24th in the points heading into this race. Truex is everyone’s favorite underdog, but shared credit should also go to first year crew chief Cole Pearn. A year ago, Truex struggled with crew chief Todd Berrier and Furniture Row Racing looked like a lackluster team with a lot of money. Now Truex is a win away from becoming the most improved driver in the modern era to win a championship, surpassing Alan Kulwicki’s, who finished 13th in points in 1991 before winning the championship in 1992.

Then you have Jeff Gordon, the four-time series champion who has yet to win a championship since the Chase format was implemented in 2004. Gordon, one of NASCAR’s all-time greatest drivers, is looking to cap his spectacular career with a championship, his first since 2001. Gordon, a sentimental favorite for next weekend, would be the first defending champion to retire if he wins at Homestead. What a storybook ending that would be.

The final championship contender is Kevin Harvick. Harvick’s career has catapulted since moving from Richard Childress Racing to Stewart-Haas Racing prior to the 2014 season. As the defending Sprint Cup Series champion, he is the favorite in a lot of people’s eyes as we head into Homestead. His season has been sensational, finishing outside the top 10 just eight times in 2015. He is the only driver left in the Chase who has won a championship in this current Chase format. It’s going to be a fun fight for the championship Sunday. I can’t wait. Now let’s answer some questions.

Q: Kurt Busch got screwed by NASCAR on Sunday. What in the world is the rule for restarts and what did Kurt Busch do wrong? Tommy P, Jackson, Miss.

A: According to NASCAR, a restart is different than the initial start of the race. It’s funny that this issue was addressed in the drivers’ meeting on Sunday, but we hadn’t heard much about it before then. My thinking is someone may have brought it to NASCAR’s attention recently and the sanctioning body decided to enforce it with more scrutiny than they had previously. The comments in the drivers’ meeting, at least from the part we saw on NBCSN, were very unclear no matter what NASCAR says.

The explanation that NASCAR gave as to why this is the case was confusing as well. In the drivers’ meeting, when the question was brought up, the answer was because on every other restart the leader gets to pick the lane they are in. The confusing part is that the polesitter can choose the lane they start in as well and it’s been that way since NASCAR implemented double-file restarts. I think it’s just that NASCAR wants to give the polesitter a bigger advantage… other than, you know, starting the race. I would still like to hear a better explanation as to why the rules are different on the initial start than what they are on every other restart. It would just be a heck of a lot easier on everyone if they had one rule for the entire race, start to finish.

Plus, there was a photo that just surfaced after the race that showed Joey Logano beating Kevin Harvick to the line during the first race at Phoenix International Raceway. There was no penalty issued to Logano, and we haven’t seen that called all year long. It was definitely an aggressive call by NASCAR in such an important race for Busch.

Q: NASCAR’s decision to stop the race due to rain this weekend was ridiculous. I am happy my guy Dale Earnhardt Jr. won, but it’s a bad way to end a final round race in the Chase. They should have done everything to finish the race and given the drivers a fair shake, even if that meant staying there until 1 a.m. or running it on Monday. Why would they end the race the way they did? Jake T. –  Syracuse, N.Y.

A: I’ll tell you, Jake, you’re not the first I heard say that and you won’t be the last. NASCAR was in a tough spot, but it will be debated for eons about whether or not it made the right decision. I believe calling the race Sunday was the right decision. The rain really picked up after they stopped the race, and it would have taken a long time to get the track back to proper racing conditions. With the season coming to a close and the most important race of the season coming up next weekend, it’s hard to say it would have been better for the race to resume. The race was past the halfway mark, which means the race could be called and those are the rules. I am not going to say I was happy with the finish of the race either, though.

NASCAR has to not only think about the teams and drivers but also the fans who bought a ticket at Phoenix International Raceway and watched the race on NBCSN. I know that is not what the fans want to hear, but they do have a say in when they want the race to air and, no matter what, they would rather show the race on a Sunday than a Monday.

Also, the fans at Phoenix paid a ton of money for a ticket and most of them would have not been able to stay and see the race if it ran on Monday. You have to think that the fans pay extra money for a Chase-clinching race and to not try and race it on Sunday would have been a discredit to those fans.

Plus you have to add in the fact that most teams have to travel back across country to North Carolina and then head to Miami for what is a long week leading up to championship weekend. I think NASCAR did the best they could with a horrible situation, although I understand your frustration.

I think I’m in the minority on this, but I like how drivers race when the threat of rain is looming. In no other scenario does each driver race the entire time like it could be the last lap. I was really surprised that with the constant reports that the rain was about to come back, all of the drivers pitted anyway. I expected at least one desperate chaser to stay out and roll the dice.

Strange part about the drivers meeting is that it just happened to be Jeff Gordon that asked the question, even though he wasn’t starting on the front row – just “his car” driven by Jimmie Johnson! Heard some people comment that it appeared as though Jimmie slowed up just a little to allow Kurt to beat him to the line. Coincidence? – I think not! Also if you listened to the NASCAR official that answered the question, he made a mis-statement, saying that “the pole sitter is allowed to lead THE FIRST LAP”, which was pointed out by one of the announcers in the booth after they re-played it!

Also, the fans at Phoenix paid a ton of money for a ticket and most of them would have not been able to stay and see the race if it ran on Monday.- Clayton

First, I actually commend Nascar for waiting it out and getting 200ish laps in. No problems there. Its the 2nd rain delay that is the problem and your comment above doesn’t hold water anymore. I would think if fans paid a ton of money for a ticket they would be ok with waiting it out even more if it meant seeing the race to its conclusion.

What irked people is it was 9:42 local time when they called the race. Given what was at stake, it seemed like they just wanted to get to half way, call it good and go home. That’s not acceptable when you are talking about a playoff race, especially one that determines who races for the championship at Homestead.

And given the radar that NBC was showing, it was a small cell and it would have passed quickly with nothing behind it, so with the Air Titans at the track, you could have had the track dry and finished the race given everyone a fair shot at it. They only had 100 laps to run. It wasn’t like they had another 3 hours of racing. And considering they didn’t even start a race at Daytona until almost midnight, its just another example of Nascar’s inconsistency officiating a race.