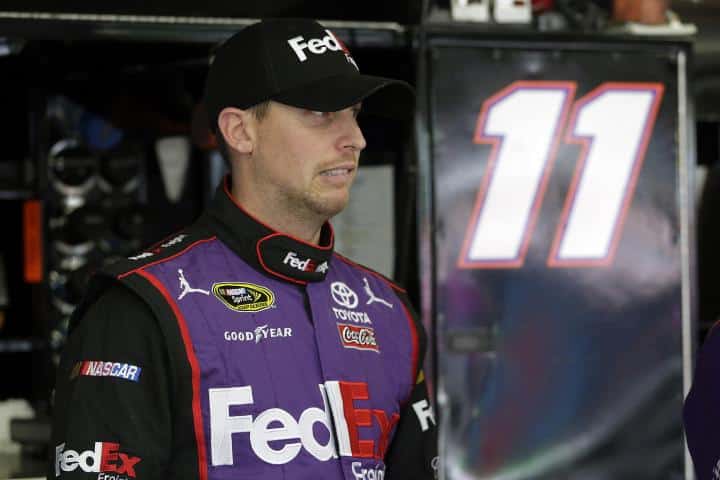 What did Kevin Harvick have for lunch on Monday? Of course, a Jimmy Johns sandwich. The Sprint Cup Series driver was also blown away by how quickly he received his order.

BREAKING: DH will do a handstand/backflip on stage if he wins #NCWTSMPD! See video on FB and get your votes in! https://t.co/I774I3zlxg

What lengths will a driver go to in order to win the NASCAR Camping World Truck Series Most Popular Driver award? I’m sure we could come up with some amusing ideas to help out the rest of the field.

Rain delayed the Quicken Loans 500 at the Phoenix International Raceway all afternoon long and into the night on Sunday. MRN posted this GIF just after NASCAR called the drivers to their cars. You have to wonder if NASCAR executive Matt Humphrey suggested a penalty….

Think Gus is over the rain delay. I still have faith we are gonna get this race in today. #11MonthsOld #IrishSetter pic.twitter.com/FKox02ZytD

Dale Earnhardt Jr. spent the entire rain delay in his motorhome on Sunday. Earnhardt passed the time by doing a little Q&A session, posting photos and of course watching his Redskins stomp the New Orleans Saints.

@NASCARonNBC I think we already are. We should hang out more. You have a cool pad. pic.twitter.com/EQKdTOOhtj

NASCARCasm had some fun on Twitter while waiting out the delay on Sunday. He and NBC Sports shared numerous tweets that included a photo of the network’s at-track command center. Let’s hope he did not push too many of the buttons during his visit.

Denny Hamlin ordered himself a Coca-Cola on Sunday afternoon at the Phoenix International Raceway. The bottle said what?

Kyle Busch Motorsports’ chassis department is more than likely one of the happiest in the NASCAR world right now. That is because Todd Gilliland scored the win late Thursday night at the Phoenix International Raceway in the NASCAR K&N Pro Series West finale in the first K&N chassis the team built.

Brian Scott had a little helper with him while he shopped for numerous things on Thursday. Scott posted this photo of his son, Joseph, on his Instagram page sitting inside the shopping cart.

NASCAR Wonka had some fun last week while watching the presidential debate on television. Wonka begged the question whether they mentioned the word “quintessential” on live television. The word has been one of the most used in the NASCAR world since the Joey Logano and Matt Kenseth ordeal started.

Kasey Kahne and NFL quarterback Russell Wilson continue their generosity outside of sports. The two recently donated $400,000 for numerous programs that help children with cancer.