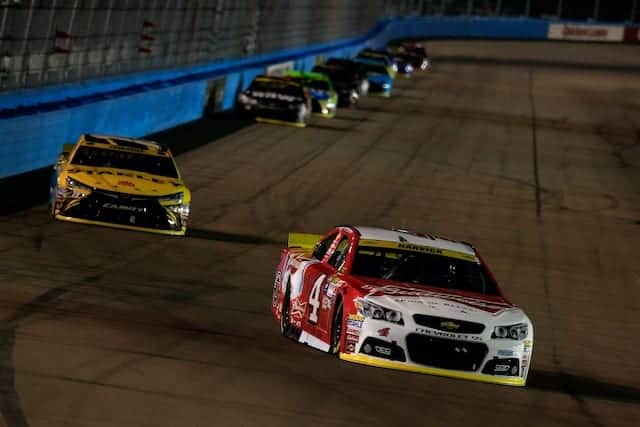 It’s hard to decide which song to attach to what turned out to be a marathon day and night at Jeff Gordon (or Phoenix International, as its usually known) Raceway on Sunday. You’ve got “The Waiting” by Tom Petty, or maybe the old “Rainy Night” by Eddie Rabbitt and of course, “A Hard Day’s Night” by the Beatles. No matter which song you prefer, we can all agree we’re not fans of the rain in Phoenix.

Kevin Harvick had the most dominant car Sunday night, but really, the four drivers that fit into this category heading into Sunday’s season finale at Phoenix are Harvick, Jeff Gordon, Martin Truex Jr. and Kyle Busch. They are the ones that will be running for the title, and it doesn’t matter how they got there. Harvick is trying to repeat as champion and since he won at Homestead last year is probably the bet with your head favorite. While Gordon’s final season has been far from cinderella-like, it could very well end that way if he wins the title in his last race. So, yes, make him the bet with your heart favorite. Coming in a close second in that category is Truex, who has been a champion in fighting cancer as long-time girlfriend Shelly Pollex has battled it. Truex is also on a single-car team, which add to that underdog role a bit, too. And almost fittingly Busch, whose nickname is Rowdy, is kind of the outlier in this group, but you have to admit he seems to have matured since becoming a husband and a father.

Dale Earnhardt Jr. isn’t in the Chase, but the last rain shower of the night was perfectly timed for him as he was the first car to cross the start-finish line when the yellow came out. It made it three straight wins for Hendrick Motorsports and the big question will be if they can make it four straight Sunday.

Joey Logano had an outstanding season with 21 top fives and 27 top 10s this season. He easily could have won the title. It will be interesting to see if he has a little more give and take next season on the track as he seemed to make enemies at an alarming rate. We’re not just talking about the feud with Matt Kenseth here, but it will be interesting to see if in next year’s Chase, assuming he makes it, and if he already has a win to advance to the next round, if he will bump another driver out of the way to get another win in what is not a must-win situation. I’m not saying Logano or Kenseth were right or wrong. I am saying I doubt if Logano will bump Kenseth out of the way any time soon.

We got to see a bit more of Erik Jones in a Sprint Cup car the last couple of weeks as he was subbing for the suspended Kenseth. And while Jones didn’t contend for wins yet, he did run in or near the top 10 regularly. So, it does appear the team owner Joe Gibbs has reason to be a bit giddy over this young talent. There’s no doubt that Jones’ future is a fast train coming.

Brad Keselowski is a former champion, but when he and Kenseth bumped a second time during the Chase race at Martinsville (an accident that also effectively ended Kurt Busch’s title hopes), you have to wonder what he was thinking. That second bump also put Keselowski in a win or go home situation for the next two races. Maybe his temper got to him for a second, but whatever the case that certainly did not make sense and it cost him a shot at a second title.

Richard Childress Racing did not have a terrible year, but it was far from stellar. RCR drivers Paul Menard, Ryan Newman and Austin Dillon went winless for a second straight season. It will be interesting to see if the team can rebound and be a consistent threat to reach victory lane in 2016 because the big issue here is not only did the team not win, but that it was rare when one of the RCR drivers was even contending for first place.

Who would think it would rain for hours on end in the Arizona desert? But it did just that on Sunday and so, yes, we give another big thumbs down to the rain. But what is maybe just as difficult when this happens is what the NASCAR decision should be: Get the race in on the scheduled day, or postpone it to the next day? There are a lot of factors in the decision, but here’s one thing that NASCAR should look at when it comes to possible rain situations in the Chase. If the race is an elimination race in one of the first three rounds, then it must be completed, even if it means coming back and running the final laps on the next day. Baseball made the rule for the World Series a number of years ago, and if NASCAR wants to have a true champion, when it comes to these key races, they needb to go the distance.

Maybe it was because they had to fill so much air time during the rain delay that they were a little loopy by the time the race actually started, but when NBC announcer Rick Allen tried to explain the Chase math at one point early in the race Sunday night, it was like he had no idea what he was talking about. Sometimes it’s just better to put the Chase points graphic on the screen, run the scroll of where the drivers are in the race and let us just figure it out for ourselves.

Junior wins because his pit stall is in front of the start-finish line. I like Junior as a driver, but that is a chicken#$%^ way to win. Talk about a stupid rule.