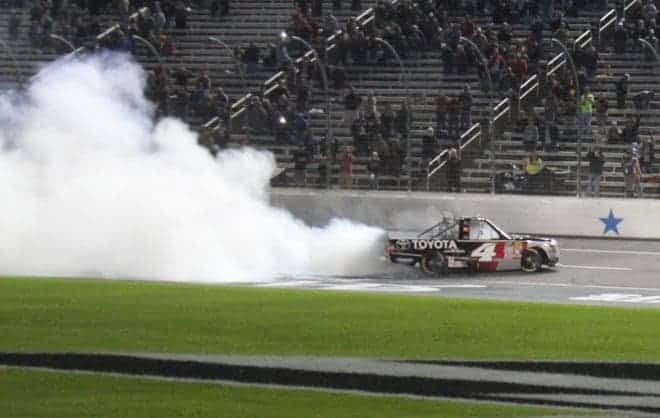 This weekend is the culmination of what sometimes feels like the endless NASCAR season. The Truck, Xfinity and Cup series all take their championship titles to Homestead undecided. The Truck and Xfinity series have done it the traditional way, with a season-long championship, and ones that have the second-place driver only about half a race behind.In many ways that means that the leader can play it safe. Chris Buescher needs only maintain a gap on Chase Elliott as he circles the track, while Erik Jones has much the same scenario with Tyler Reddick. Will anything change? It may not be likely but the truth is that anything can happen in motorsports.

Just look at last week’s truck race when Matt Crafton tried to hold a narrow lead on Jones. Disaster. But at least Crafton was going for it when he lost control and later made friends with the wall. Had he just held on to his position, he may have gone to Miami with a difficult but similar gap.  Now it looks like he will most likely be an afterthought.

The NXS race at Phoenix did not bring the same drama – especially with Kyle Busch toying with the field. Buescher may not have had his best race but he didn’t do anything to hurt himself either; and Elliott, Ty Dillon and Regan Smith failed to make any significant moves to put them in better shape at Homestead.

The Cup Series brings a different story, with Busch, Kevin Harvick, Martin Truex Jr. and Jeff Gordon all with an equal chance to win the big trophy. Some, and likely those within the hallowed halls of NASCAR would argue that because of this scenario, that the Chase does, in fact, work. Sort of.

Just because the Cup race brings an element of drama doesn’t mean that it doesn’t feel in some ways artificial. Then again, just because the other series bring their own storylines that may seem interesting, doesn’t mean that the races will be all that special. The one thing that has been true the last few trips to Homestead is that the track has hosted some of the better racing out there for the cookie-cutter 1.5-miler banes to the racing existence. The progressive banking at the track allows for drivers and teams to find different ways to work themselves aroundNo matter which series hits your fancy, a hearty hurrah to the final races. Hats off to another season, because for all of the griping, criticism and silliness, NASCAR has once again entertained – not always for better, but they’ve kept at it.

Happiness Is… Gordon. Once reviled, the elder statesman of the garage is now one of the more revered. The cocky, goofy kid from California and Indiana has grown up before all of our eyes and, while he did so, acted as the face of NASCAR.  Remember his face on the Wheaties box? His stint on Saturday Night Live? His frequent appearances on Regis & Kathie Lee? OK, not too many of us remember the R&KL ones. He’s been an ambassador for the sport. In a funny way, he also may have been a factor in encouraging its growth beyond its own limits.

Here he is now with a chance to win that elusive fifth championship. The drive for five seems to have been going on for most of his career at this point. The same format that has messed with his chances so frequently is, however, the thing that might just give it to him, finally. With full Hendrick Motorsports backing, there’s reason to expect that he’ll show up with a ride that should be able to compete with the other three. Gordon winning would be a Disney ending, and the film would probably move into production next Monday. Even though it won’t likely happen, Gordon will be one of the main reasons to watch – and as he fails yet again, it won’t make his career any less of a success or his presence on the track any less missed.

Happiness Is… Matt Kenseth. Kenseth met with some of the-powers-that-be in NASCAR this week, probably in an attempt make sure that he’ll be on his best behavior or something like that. Will that be enough? One of the things that came from Phoenix was the interview Kenseth had with AP’s Jenna Fryer. In it he stated that he had to wreck Joey Logano to keep his respect in the garage. Horses–t.

Kenseth had never lost respect and there’s no way that could have been the case. He’s been a staple since he moved to Cup after his NXS championship and, though he’s had his run-ins with other drivers, no one has pegged him as dirty, nor has anyone else thought he wasn’t top flight. This whole Logano incident seems to have wrankled him more than anyone ever has, and it’s rather surprising. Just as notable is the fact that Joe Gibbs apparently hasn’t intervened to have a chat with the driver of the No. 20 and calm him down. Or maybe Gibbs doesn’t like Logano either. Regardless, the question of whether Kenseth may again do something stupid this weekend will be worth watching – and adds an intriguing element.

Happiness Is… The Finales. The NASCAR season is basically the longest of any major sport. Though Formula 1 will be ending after NASCAR, they started about a month-and-a-half later. Baseball, the longest of the stick-and-ball sports, ended a while ago. The concept that NASCAR is a marathon is all too real, and something that wears out the teams, drivers, media, fans and probably a number of other groups not mentioned. So going to Homestead brings with it a feeling of elation for having reached the finish line.

This weekend is the culmination of a lot of people’s hard work. It’s kind of amazing that everyone makes it through it. That makes these last three races a kind celebration. Enjoy the last laps of the 2015 season and all that they bring, be it intense side-by-side action, or strung out parades that are often sleep inducing – because really, that’s it. Once the final checkered flag flies, it’s time to start the countdown until Daytona. Cheers.

End of the season (finally) and the end of an era in that Gordon retires. I will miss seeing him race when the season starts next year, but I certainly will not miss the “drama” involved in the chase, chase, chase madness that ensues in NASCAR every year. I’ve hated the chase from the beginning. Next year, I can sit back and be that casual fan that Brian France coveted so much. I’ll watch if I feel like it, but care about NASCAR, nah, that ends when the Cup race at Homestead is done. Whether he wins the Cup trophy this year or not (and I hope he does), he’ll still be MY driver. #24ever