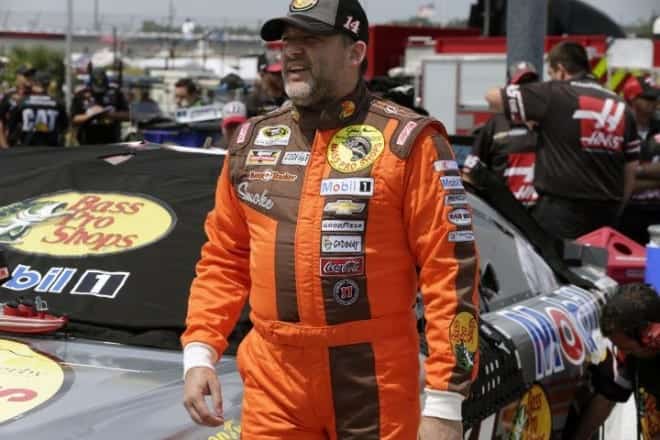 During Thursday’s Championship Media Day at the Diplomat Hotel & Spa in Hollywood, Fla., Stewart-Haas Racing co-owner/driver Tony Stewart was asked about his team and what they are planning on doing to right the ship, and though he did not offer any specifics, it is safe to assume that Stewart wants his team to be back up toward the front for his farewell season in 2016.

“Yeah, I think you’ll have that answer soon enough. But there’s going to be a lot of change,” Stewart said during a breakout session. “It’s not like we were a 15th-place car all year. We haven’t been even close to that, unfortunately. There’s going to have to be a lot of changes. The hard part is when you get back where we’re at right now, it’s hard to sit there and say exactly what you need, because if it was that easy, you’d have fixed it by now, which makes it even more difficult to sit here and to be honest and tell you what we know needs to be changed. That’s the hard part is trying to find those variables that we need to work through to get better next year.”

The changes will likely not be limited to just Stewart’s No. 14. During the media session, Stewart indicated that the No. 10 team for Danica Patrick needs to show improvement as well. It is unclear what these changes will ultimately mean for the organization; it could mean a number of high-profile members of the team are replaced, and it could mean a simple shuffling of personnel between the shop and road teams.

For Stewart, the 2015 season has been the worst of his Sprint Cup career by almost any measure. The former champion is 28th in points with only three top-10 finishes. He has already clinched a career-low in top fives (zero), top-10 finishes and average finish, while he’s also on track to at least equal the lowest number of lead-lap finishes in his career. He is also on pace for the fewest number of laps led (currently 24) in any season.

However, not everything is bad for Stewart. He is looking forward to the upcoming rules package that debuts at Atlanta in February.

“[The new rules package is] definitely not going to hurt us,” Stewart stated. “It definitely suits my driving style better than this era of taking horsepower away and adding downforce. I think we established at Michigan and Indianapolis that that package was a total disaster. Hopefully this will be better.”

“The changes will likely not be limited to just Stewart’s No. 14. During the media session, Stewart indicated that the No. 10 team for Danica Patrick needs to show improvement as well.”

Clearly the problem is the driver. Not only has she finished on the lead lap fewer times and had more finishes outside the top 25 than in 2014 in order to even score as many points as she had last season she must have her first top 5 Sprint Cup finish. That’s unlikely. To date she is 0 for 117 in that category and only 6 of 117 in top 10s.

Last year she complained her cars were slow. They ran fine for Kurt Busch. In 2015, with a new crew chief, many/most of her top 20 finishes were due to clever strategy by the Knost and just plain dumb luck (for instance Phoenix 11/15/2015).

SHR can make whatever changes they want but the results will continue to be the same while Patrick focuses on building her brand. Until Danica starts taking responsibility rather than blaming everybody/everything else it will be business as usual.

It appears that Stupidimator is just repeating a tired and disproved line of thinking regarding Danica.
Her cars ARE slow off the hauler… have been all year… and Knost fumbles around for half a race trying to figure out how to make the car better and finally, in a lot of races, they get the car at least half decent but by that time she is in 22 -28 and most times a lap down.
There have been many times she qualifies in top 15, then Knost screws up the race setup and when the race starts she is struggling to get the car to run as well and in many races loses spots.
When she is given a good to great car, she can race in the top 10 – 12…. but those times are few and far between. If she was so crappy a driver, how does she even get to finish in the top 10 like she has a number of times… and at some tough tracks? She raced to those spots… so that throws the crappy driver argument into the garbage can where it belongs.
Look at Tony… do you really think he is that bad a driver now, after being so good just a few years ago, to finish how he has been finishing? ITS THE CAR, STUPID.