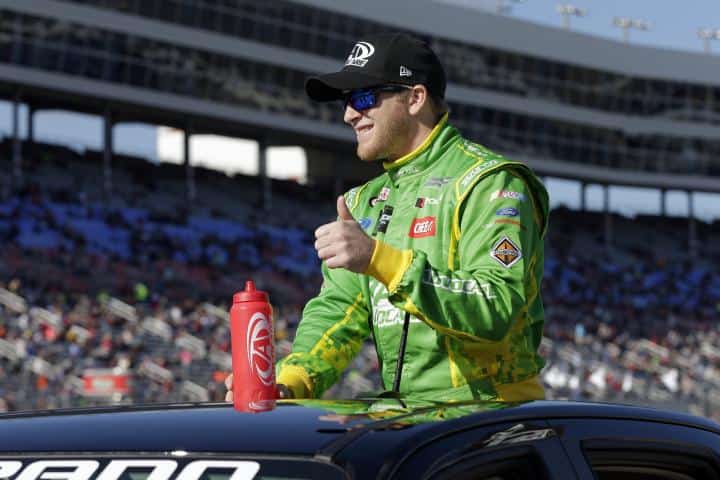 It has been nearly two years since I first spoke with Chris Buescher. Fresh off an ARCA Series championship, the Texas native had a smooth accent – coming off not too thick where he would sound like a cowboy or too weak where he didn’t even seem like he was from the Lone Star State, but one right in the middle.

His diligent answers amazed me, especially since Buescher was just slightly older than I was. He didn’t have any answers prepared; instead, he paused in between each question, something I had seldom heard during my interviews at the time – and still barely see to this day.

One topic came up that was very personal to him. His cousin, James Buescher, had just come off a Camping World Truck Series championship in 2012. The two had a minor family rivalry, but infrequently debated about their careers. For the younger of the cousins, it was a topic that changed his tone, making him answer quicker and creating more fluid answers about someone who wasn’t just a cousin, but also a childhood friend.

“It was kind of strange,” Chris said last January. “Growing up, we were a couple of years apart, so we were always in different divisions. When I was racing Bandoleros, he was in the older age bracket. He was able to be successful extremely early, but we were never really able to race each other for a long period of time. I never imagined we would be at this level, but it is certainly very cool to do so.

“It is a little bit of a family rivalry. It is a good time, and it is just a matter of keeping it friendly, I guess. It should be interesting. We have a lot of family members, so it will be hard to keep the peace.”

A few years later, the Truck Series champion has been out of a ride for most of 2015, while his younger cousin is beginning to flourish as expected.

Buescher, 23, enters the NASCAR Xfinity Series season finale in a shape similar to his cousin a few years ago. He leads reigning champion Chase Elliott by 19 points, a gap that can be erased with one mistake or flaw in his racecar on Saturday afternoon. His worst finish for the season is 20th at Richmond in April.

With Ty Dillon and Regan Smith trailing Elliott by less than six points, an issue from Buescher and a win by either of those drivers could leave the championship wide open. However, his peers shouldn’t count on the No. 60 car having an issue during the race.

Buescher’s average finish this year is 8.3, slightly off Elliott’s mark of exactly 8.0 last year. While he ranks fourth in the series in top 10s, sitting behind Elliott, Smith and Dillon, respectively, his ability to limit mistakes is what has separated him from the pack. Whenever his team has faced adversity, top fives and 10s might not have been produced, but they limited the damage, whereas the other three drivers simply were not able to do just that.

While he is competing in slightly lesser equipment than the men with whom he is competing for the title, Buescher has taken top 10s and turned them into top fives, along with cars usually capable of running mid-pack to ones just outside of the top 10. Avoiding wrecks and mechanical failures has been a key for the two-time winner this year. He has led more laps than any other full-time driver, pacing the field for 263 circuits this season.

“We haven’t had issues,” Buescher said in a teleconference on Wednesday. “We’ve been steadily picking up a little bit of speed as we go. You know, from the chassis side of things, we’re all running the same race cars for the most part. We have a couple of races where some of us have tried different packages, just trying to look for ways to improve for next year.

“You know, really I can’t give you a good answer on why it hasn’t been more consistent along the entire four teams, but you know, I think we look at the places we’ve gotten wins with two of our teams. We’ve been fast with all four of our teams at different points and at different racetracks.”

As the series heads to Homestead-Miami Speedway, Buescher is set to take home the crown. It is one that is well-deserved for the No. 60 team, especially since their teammates sit fifth, sixth and 10th in the standings, with none of them earning more than four top fives. Overcoming Roush Fenway Racing’s struggles, he has become the leader the organization desires.

But what makes him different from two-time champion and fellow Roush driver Ricky Stenhouse Jr., who has struggled in his transition to the Cup Series?

For starters, Buescher did not wreck at the beginning of his career, and he seldom does to this day. In 73 NXS starts, he has one DNF, which came at Texas in April 2014. He has finished 20 laps or more down only three times in his career with RFR, and is looking to become the first driver in team history to never record a DNF in at least one race during a full season. Seven drivers that have run full-time in the NXS for the team have come close to running a full year with a DNF, but none have ever accomplished it, ending the year with only one DNF.

Buescher’s ability behind the wheel is just as impressive as his professionalism outside of it. He has begun to attract corporate sponsors, something he struggled with in 2014. With 11 sponsors in 2015, he had the same amount of companies being showcased on his car. However, this year, it was different, as Roush Performance Parts and Ford EcoBoost appeared on his car 10 times, compared to having only six races in 2014 that were sponsored outside of any companies associated with Roush and Ford.

When I spoke to Buescher again at Dover in May, he was cautiously optimistic about his title hopes. However, his plans for the future have remainder uncertain in the midst of his championship run, one that started with a victory at Iowa Speedway that he called “a big step.”

“I think it is just another year together,” Buescher said. “We have 95% of the same guys on the team this year. They are guys that have worked together for a little bit of time now and are able to get used to each other and build some chemistry to learn what our number scale is between each other. Communicating more efficiently has been one of the big hitters.”

Except that it is not just another year. It is one that has been magical for the No. 60 team, and one that will evidently elevate him to the Sprint Cup Series sooner rather than later.

“We have some partial stuff that could work in the Cup Series or the Xfinity Series. We have different scenarios working out, but nothing is even close to the point of finalizing that that I can even talk about. I honestly don’t have a good answer as to where it’s going next year. I felt better about it three weeks ago and since then things have taken a lot of turns.”

As he concludes on his championship run, the future is increasingly bright, similar to the likes of what his cousin was once considered. Now to see if their paths diverge.

Since nobody is watching this series, show of hands, how many people knew Buescher was the points leader, given Busch, Keselowski and other Cup regulars win most of the races? By the way, did I really see Kyle Busch on the entry list at Homestead for the Xfin series? Glad to see his priorities are in order. Wow. Just wow!