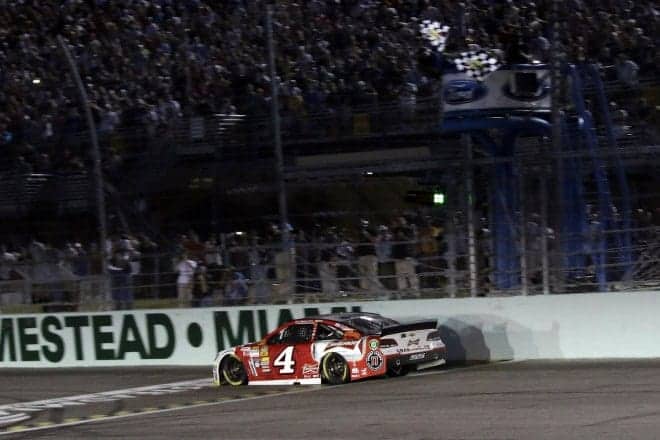 It’s been a long season, but the end of the 2015 NASCAR Sprint Cup Series season is upon us. Only 400 miles separates one of drivers from racing immortality as the 2015 NSCS champion.

A quick scan of the Championship 4 – Kevin Harvick, Kyle Busch, Jeff Gordon and Martin Truex Jr. – shows that a David vs. Goliath-style battle is shaping up at Homestead-Miami Speedway.

Looking to repeat as champion, Harvick has rattled off one of the most impressive seasons in NASCAR history to set himself up with a chance at another title. Overcoming an injury and his snakebitten past in the Chase, Busch has flexed his muscle to lead Joe Gibbs Racing and give Toyota its final hope at a title after dominating the summer months.

While Busch and Harvick have been among the best in the field, Gordon and Truex have risen to the occasion of the Chase to keep their title hopes alive. Gordon barely made the Chase on points after going winless in the regular season, but rode supreme consistency and an emotional Martinsville Speedway triumph to make the final round. Meanwhile, Truex showed surprising speed and earned a victory at Pocono Raceway before riding consistency through the Chase. The New Jersey native is now looking to pull off the unthinkable, carrying Denver-based Furniture Row Racing to the first NSCS title for a single-car team since Dale Earnhardt and Richard Childress Racing triumphed in 1994.

Harvick and Busch enter as the favorites to claim the title, but all four teams enter Homestead with a clean slate. Can Gordon or Truex pull off an improbable championship, or will one of the favorites seize the Sprint Cup in the Ford EcoBoost 400?

Can One of the Championship 4 Underdogs Prevail in Homestead?

Opinion One: Yes. Get Out Your Cinderella Slipper
Written by Sean Fesko

Everybody loves a good Cinderella Story, and we have two such in this year’s Championship 4: Gordon and Truex. I’m going to go ahead and say it: one of these two will be your 2015 NASCAR Sprint Cup Series Champion.

Why? You know their stories. Gordon, a 23-year veteran of the sport who’s been snakebit by the Chase format, gunning for that elusive fifth title in his final season. Truex, driving for a single-car team based hundreds of miles from the hub of NASCAR, striving for his first Cup title a year removed from a 24th-place points finish and two removed from losing his ride at Michael Waltrip Racing.

But let’s put sentimentality aside. Good feelings don’t win championships; results do. And these two drivers are among the five best ever at Homestead in terms of average finish. If you toss out Brendan Gaughan’s single sixth-place run, they are in the top four. Truex averages 10th and Gordon a 10.56.

True, Harvick leads them both with a 7.57 average finish, but don’t forget that self-induced mistakes can cost you. All it takes is one slow pit stop and your title hopes can be crushed. Just ask Joey Logano, one of the favorites in last year’s finale. The No. 4 team has endured too many issues this season to consider Homestead a lock.

Also, Harvick may have 19 top-three finishes this season, but only three of those are wins. With stats like those, it’s easy to predict that while Harvick will finish well, he won’t be high enough to become a two-time champ. It’ll take a win to clinch the title. Harvick knows that; he did so last year and his owner Tony Stewart did the same three years prior.

So the door is open for Truex and Gordon to steal the title from the heavy favorite.

Homestead is statistically Truex’s best track, and he’s run well enough here in past years that he’d make the race broadcast despite not being in the Chase, a feat that’s hard to accomplish. Three top fives and seven top 10s through 10 races aren’t too shabby. Expect the No. 78 to pick up the pace even further now that they’re running for a championship, similar to how Ryan Newman did in last year’s race.

FRR also has a technical alliance with RCR, a team that gave Harvick six straight top-10 finishes, including three top threes from 2008-2013 before Harvick left for Stewart-Haas. With RCR behind them, FRR has an additional notebook of solid notes in addition to their own, a valuable commodity for a single-car team.

Gordon has six top 10s in his last eight races at the south Florida track and is peaking at the right time, having won at Martinsville and racking up six straight top-10 finishes. There’s a fire behind the future Hall-of-Famer, something that has been largely lacking this season. With the same fire behind him last year, he almost made the final four and led 161 laps in the finale. Imagine what he’ll do now that he’s fighting for the title.

He last won at Homestead in 2012 and said he wouldn’t hesitate to move the leader out of the way, Logano-style, in his final race if it meant that he’d win the championship.

There’s a hunger for all four drivers, sure, but Gordon and Truex are the hungriest of them all. It’s what’s going to drive one of them to the title.

Opinion Two: No. Save Your Upset Stories for Another Year.
Written by Aaron Bearden

Feel-good stories like Alan Kulwicki’s legendary Cup championship in 1992 often resonate with the series’ fans for years after they’re accomplished.

There’s a good reason for that: They typically don’t happen.

Such will be the tale on Sunday, when one of the two favorites to win the championship – Harvick and Busch – pulls into Victory Lane as the 2015 NSCS champion.

Sure, Gordon and Truex technically have just as much of a chance as Harvick and Busch, but the statistics aren’t in their favor.

Gordon has led the 2015 Chase field with an average finish of 7.7. The stat is impressive, and telling of Gordon’s resurgence as his career winds down. However, in the post-2013 era of the Chase, a different stat separates the two favorites from Gordon and Truex.

In the nine races of the Chase preceding Homestead, Gordon has managed only two top-five finishes. Truex has suffered similar difficulty cracking the top five, with only one such finish – a third-place run at Charlotte – in the same nine-race span.

By comparison, Harvick has four top-five results, including a win at Dover, and Busch leads the entire Chase field with five top-five finishes, including three straight in the previous round and five in the last seven races.

In 2014, Harvick’s surge to his first title required holding off Newman and earning a victory in the Ford EcoBoost 400. Should the same level of result be required this season, the stats again favor the Busch and the defending champion. The two drivers have combined to win seven races this season, with Busch’s four victories coming in only 24 starts after the Nevada native missed the first 11 races with an injury.

Truex and Gordon, while fast, haven’t fared as well in the win column. The two drivers have combined for two wins, less than either Harvick or Busch have managed by themselves.

Gordon and Truex are both on the verge of accomplishing an incredible comeback story by virtue of their consistency in the Chase. However, they’ll need to elevate their performance if they want to lift the Sprint Cup.

Because going into Homestead, consistency no longer matters. What counts is who can earn the highest finish in a single event. This is why either Busch or Harvick will ultimately reign supreme.

Given that Harvick is a weenie supreme, and what he did at Dega deserved the pitchfork crowd, well nothing suprises..as to what is considered a sin or not anymore. Nascar deemed it a non issue, despite evidence to the contrary. Ah…and they wonder why fans are..oh never mind. Anyhoo….If Busch, Gordon or Truex hoists that trophy and they do it with all the conviction in the world that they truly earned it this season, well there is no hope. But I suspect they will, as the media will too. So sad. The games that need to be played instead of the truth. The Emperor gets away with it continually because nobody dare tell him (that counts) that he has no clothes on.

IMO Gordon’s been robbed of at least 2 trophies since the Chase was implemented. If he gets to hoist that trophy this year, I’ll be happy for him and figure he earned it.

Gina, I’m a fan of Jeff’s and remember some on track and in pit scuffles but I can’t remember him ever losing his temper during an post race interview or being critical of NASCAR like a Busch, Stewart or Kesolowski. Can you? It makes me think he will fit perfectly into a broadcaster cheerleading costume next year and he’ll look like a clown. For the life of me I can’t figure why he is doing that when he has the world at his fingertips.

I’ll tell you why.
Ego: plain and simple. Can’t leave the spotlight.
Me, I would just take the money and go fishing.

I’m with you. Trolling the Monaco coast in the Hendrick yacht.

J. Smith, honestly I was surprised by the announcement that he was going to become part of the Fox broadcast team. I really thought he wanted to get “off the road” so to speak.

Well, he and Tony certainly had a few harsh words over the years but I agree that generally Gordon is far more contained than the others you mentioned and certainly is very very PC when it comes to NASCAR.

Do you think PC should be changed to NC? Na$car Correct?

I think we should pray for Truex to be ahead of the other three with about 5 laps to go and it starts to pour before there’s a debris caution to help a Hendrick driver. But, then again, Brian will not end the “race” until he has that chance no matter how long it takes.

Who exactly are the favorites? Its such a crapshoot, how can you pick favorites vs underdogs? Sentimental favorite for me is Gordon. He is owed one and would love to see him leave on top. Next is Truex, simple because it will expose, even to the casual fan how ridiculous this format is to crown a champion. I like Truex, but considering the drivers that got eliminated, he should be nowhere near the Top 4, so I hope he does win it all if Gordon can’t. Harvick should have been eliminated were it not for him taking out half the field at Talladega, and Kyle shouldn’t have been eligible to begin with. I just hope Nascar lets the drivers settle it and not try to manipulate things.