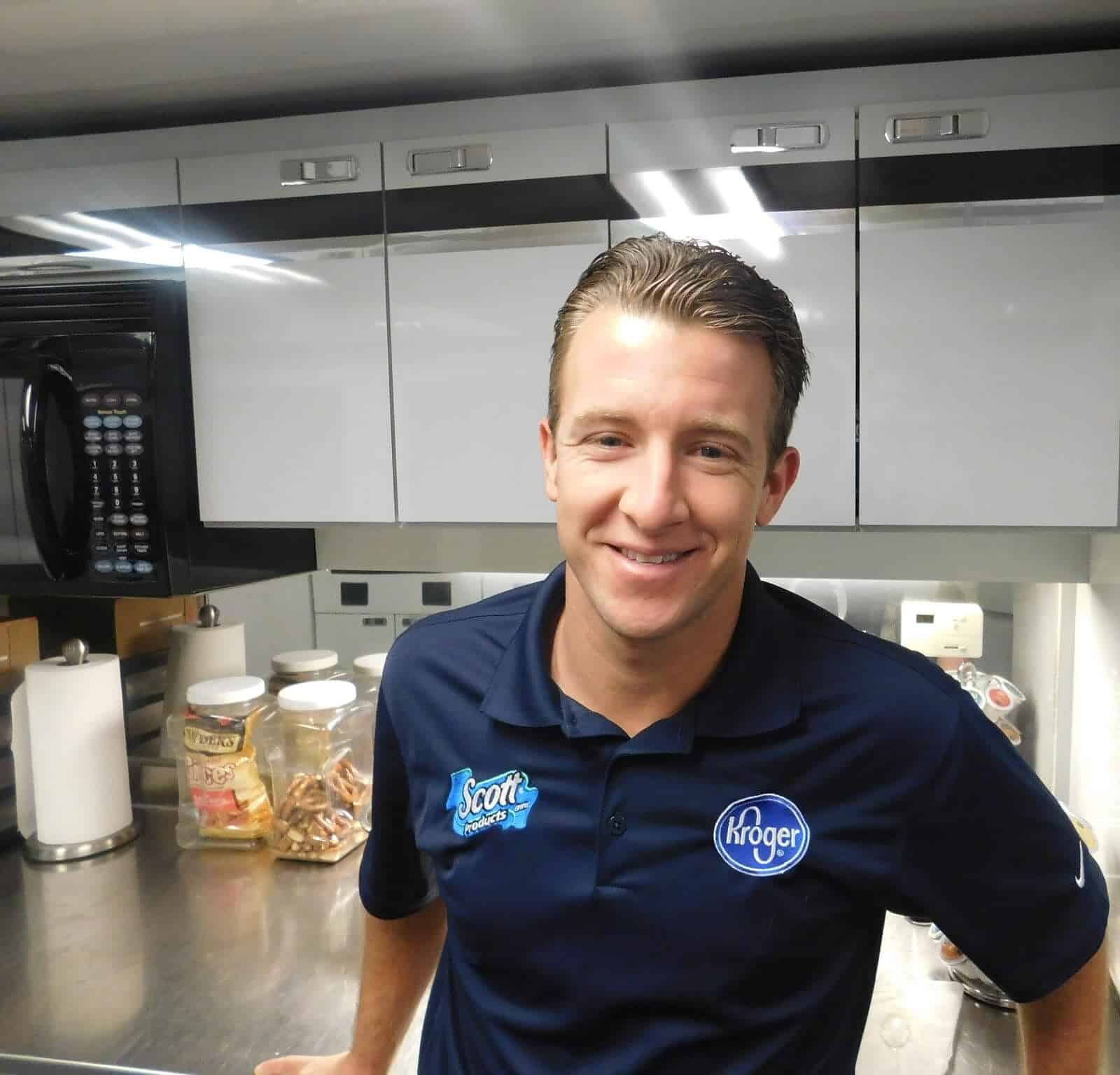 Transitioning from driving a racecar to wearing a suit and tie behind the screen of a national TV network can be quite the drastic curve for Sprint Cup Series drivers, but AJ Allmendinger is having a good time with it, he says.

Allmendinger, a full-time Sprint Cup Series driver in the No. 47 Chevrolet for JTG-Daugherty Racing, has dipped his toes in the TV business this year by being a guest analyst on Fox Sports 1’s NASCAR Race Hub on Mondays or Tuesdays.

“I really have fun with it,” Allmendinger tells Frontstretch. “I’ve learned a lot. It’s cool for me to be able to go back and look at the race and see what happened. Because most of the time, obviously when you’re on the racetrack you’re focused on yourself you don’t see the grand scheme of what happens throughout the course of the race. It’s always fun to go look back at it. I enjoy it. I have a lot of fun with it. You never know if there is something down the line after this world of racing.”

Race Hub is no slump in regards to driver personalities on air as Joey Logano, Brad Keselowski, Brendan Gaughan and David Ragan are regular weekly aces on the program. Having drivers speak about the race on Monday, fresh off the track, has brought a new perspective to not only viewers but also the drivers themselves.

“When I’m on the show on Monday or Tuesdays, they are usually talking about the winner of the race or the big news day,” Allmendinger says. “Say, the Joey-Matt [incident] at Martinsville, stuff like that. It just gives me a different perspective of how that day went for those guys.”

Allmendinger also receives a more broad view on how a race is won as strategy and controversy can play as big a role as the motor under the hood.

“And how the person won the race,” he explains. “Was he dominant all day or did he have struggles on pit road? Did they have to fight back through the field? That’s just stuff you don’t see when you’re actually in the racecar.”

Popular in the garage area, Allmendinger has a certain edge that brings along laughs, lessons learned and humorous jabs on-air among Race Hub’s regular personalities – as well as during commercial breaks.

“Everybody there at the studio, Adam Alexander, Danielle Trotta,” Allmendinger says. “I do it with Larry [McReynolds] or Jeff Hammond. It’s a fun group to be around, we have fun on the show, in between the breaks we had even a lot more fun. It’s fun for me to kind of look at that aspect of it and see how it’s done. Danielle and Adam – especially because they are the ones hosting the show – just how good they really are at it is pretty amazing to me.”

A critical part of Allmendinger’s enjoyment is the people involved. The camaraderie shows on-air as they bust one another for some good, friendly humor.

A new addition to the Hub crew is Dave Moody, who hosts a weekly talk show on SiriusXM NASCAR Radio as well as populating turn 1 in tracks across the country. He made the switch to TV with his new segment “The Pulse,” which airs every Monday.

“It’s fun to hear what all the callers are talking about on Monday,” Allmendinger says of Moody. “I’ve told him many of times how I don’t know how he puts up with it because you get some call-ins sometimes of just the strangest ideas or conspiracy theories or what’s going on. But he does a good job, he’s really good at it.”

For Allmendinger, having Moody around during the Monday show adds some perplexity in more ways than one.

“I think the way he transitions on to TV, with that as a radio analyst and a radio host, he’s really done well,” he explains. “I think he does better than I really expect him to, as well. He’s still got the face for radio, he doesn’t have the face for TV.”

Arguably the most substantial racing-to-broadcasting move in recent memory is Jeff Gordon moving to the NASCAR on FOX booth alongside veterans Mike Joy and Darrell Waltrip for the opening 16 rounds of the 2016 Sprint Cup Series season following his final race on Sunday. Looking at Gordon’s move, Allmendinger is hopeful for a future career in TV; though he is in no rush to do so, having a five-year contract with JTG in the Sprint Cup Series.

“Hopefully it’s a long way down the line,” he admits. “The good thing is that I’m getting to be a part of it so I can at least understand and feel if I really enjoy it as something I might want to do after [racing].

“I’m here for another five years, who knows what’s going on in five years from now on what people are doing with TV. It’s always nice to have a foot in the door for something after this, just in case. But like I said, the biggest deal is hopefully that is a long time from now.”