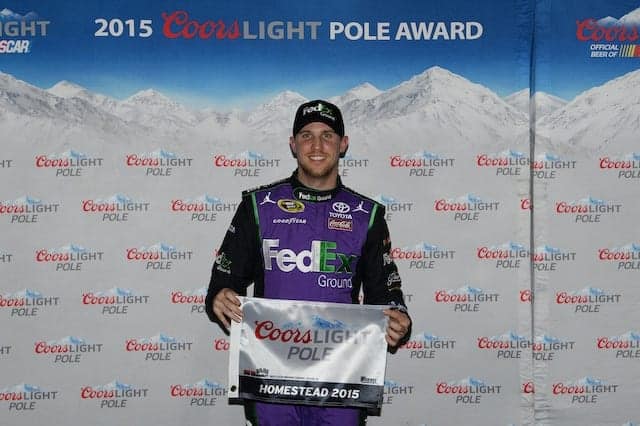 The battle for the Sprint Cup Series championship will start in Denny Hamlin‘s rear-view mirror. The Joe Gibbs Racing driver won the pole for Sunday’s Ford EcoBoost 400 at Homestead-Miami Speedway, putting the No. 11 Toyota up front over all four title contenders.

The pole, won with a speed of 176.655 mph is the 23rd of his Sprint Cup Series career and third of 2015. With the title out of reach, Hamlin’s Sunday goal is simple: win Jeff Gordon’s final career race.

“Our car is really fast,” he said. “Sitting back here and watching Jeff qualify and everything and it’s like – I thought of it before but didn’t think of how awesome it would be to win his final race. No disrespect to him, but man, that would be awesome.”

The Championship 4 of Kevin Harvick, Gordon, Martin Truex Jr. and Kyle Busch all had good speed; three of them made the final 12-driver round of qualifying. Busch will lead the title hopefuls Sunday, starting from the inside of the second row.

“It’s not bad,” Busch said of his third-place qualifying effort. “We certainly got a good run there. Nothing to hang our heads about right now with our teammate being on the pole. Ill definitely learn some things from what that was.”

Gordon completed the final qualifying run of his career ranked fifth on the boards, the second-highest Chaser for Sunday’s finale. The four-time champion will wrap up a 23-year Sprint Cup career with this 400-mile event.

“Just more disappointed in myself after the first run,” Gordon said. “I think that really affected me, the first run. I just didn’t push the car hard enough, didn’t realize how much more grip was going to be out there.”

Truex is the next of the four contenders; he’ll start back in 11th position. The Furniture Row Racing wheelman isn’t too concerned though considering how the team has lagged behind in qualifying all year.

“Qualifying hasn’t been our strong suit on these types of tracks,” he said. “11th was a decent effort. Obviously, wanted to be better.”

Harvick wound up the worst of the foursome. The No. 4 Chevrolet struggled in the second round, running short of advancement after locking in a 13th-place starting spot.

“Round 1 was really good for us,” Harvick said, “and then we went to Round 2 and [the car was] just really, really tight in the next two runs we made. We just never really recovered what we did in the first round.”

Matt Kenseth starts 19th in his return to Sprint Cup Series competition following a suspension that sat him out the last two races. Kenseth met with Joey Logano before the session, mending fences face-to-face and says the feud won’t drag into Sunday’s event.

Speaking of Logano, he ran second while Ryan Newman qualified fourth ahead of Gordon. Ryan Blaney – who announced a full-time Wood Brothers Racing endeavor for 2016 – slotted in sixth with Carl Edwards, Brad Keselowski, Dale Earnhardt Jr. and Austin Dillon rounding out the top 10.

Rookie Jeb Burton and Reed Sorenson did not qualify for Sunday’s finale.

The Lucky Four weren’t the top four qualifiers? How could Brian let that happen? Oh well, after about 25 laps guess who the top four cars will be. And 39 drivers and sponsors might as well be in their own race without coverage.

I forgot to mention that it looks like Jeb Burton won’t cause the last caution for Hendrick.

Glad you said that DonninAjax, I say it about Jeb and I am the nut. Doesn’t take much to figure that one out. I am sure somebody on the payroll will cause a spin at the end of the race, depending on the manufacturer in ”The Chase” that needs a caution. SMH. I am pau for the season maybe even forever. Good seeing your comments…Happy Holidays.

There should be some kind of contest for predicting who will bring out the last caution. Not that there is any evidence to suggest that. What should the prize be?

I don’t know if anyone predicted it but, Harvick causing the last caution at ‘Dega wins the prize and that prize very well may be the *Championship.

Denny, Denny. What gives you any thought you could win that race? You will mysteriously speed on pit road or maybe “jump” a restart. You winning is not part of the script.

I wonder if there was a “Gotcha” on the Johnson private frequency when Kurt got his penalty?