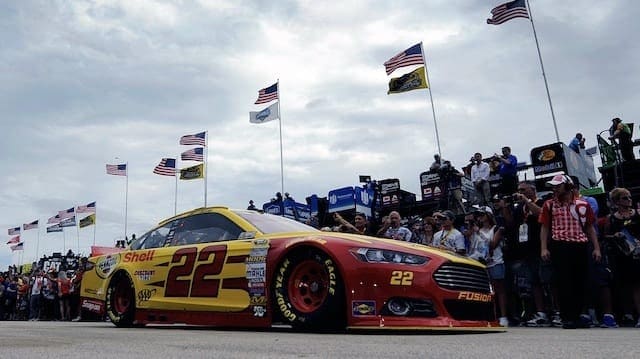 On Saturday afternoon, the Sprint Cup Series finally managed to get in a full practice session at Homestead-Miami Speedway. After rains shortened Xfinity Series qualifying to only two rounds, track crews worked hard to get the surface back into racing shape. By 1 p.m., the track was ready to go for 50 minutes of practice.

Much like in the first session, drivers went out immediately to try to set their best times. Chasers Jeff Gordon and Martin Truex Jr. were the first drivers out there. Gordon was on sticker tires, while Truex was on scuffs. The result was that Gordon effectively trounced Truex over a series of laps. However, their first laps when they were nose-to-tail ended up ninth and tenth in the session, separated by less than two hundredths of a second.

A minute later, Joey Logano put down a lap of 30.786 seconds (175.404 mph) and let people take swings at it. No one was able to top the Team Penske racer. The lap was seven hundredths of a second faster than Kasey Kahne in second. Hendrick Motorsports teammate Dale Earnhardt Jr. was third quickest, while Carl Edwards and Kurt Busch rounded out the top five.

Gordon also turned in the best 10-lap average in the session, averaging 169.489 mph over the 15-mile distance. Fellow Chaser Kyle Busch had the fourth-best 10 lap average, while Truex was seventh and Kevin Harvick was way down in 16th. He ran much of the session on scuff tires, so it may not be a true indicator of his pace.

There was one tire issue during the session. Similar to David Starr during Friday’s NXS practice session, Michael Waltrip Racing’s David Ragan cut a left-rear tire and was forced to trundle back to the garage at a reduced pace. No damage appeared to be done to the Aaron’s Toyota as a result.

Only 42 cars took time during the session. AJ Allmendinger‘s No. 47 did not venture out onto the track after his contact with the wall during the first session.

The team chose to sit out Happy Hour to repair the No. 47. They will continue to work on the car and thus, keep their starting spot for Sunday.