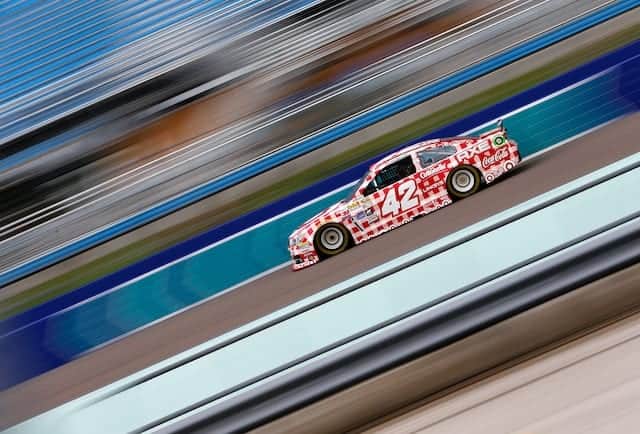 The Sprint Cup Series is two-for-two so far this weekend in Homestead. Unfortunately, they’re two-for-two in practice sessions being shortened by rain.

The session itself started about five minutes late due to track drying from overnight rains. Because of that, the session was going to be extended to 11 a.m. That did not turn to out be necessary. Around 25 minutes into the session, it began to spritz rain. At first, the rain was relatively light and lapping continued. Eventually, NASCAR was forced to put out the red flag and cut the session short.

Once the cars got out on track, drivers immediately got to the task of setting down fast laps. With the high tire fall-off seen so far this weekend, almost all of the fastest times were set on the first lap. Kyle Larson‘s first lap of the session, set in the opening minutes, was 30.680 seconds (176.010 mph). That lap held up for the whole session to be fastest of all. The lap was almost 15 hundredths of a second faster than Kevin Harvick, the fastest of the four Chasers in second. Carl Edwards was third quickest, while Greg Biffle and Joey Logano rounded out the top five.

Ryan Newman was sixth fastest, followed by Jimmie Johnson and Aric Almirola. Kyle Busch was the second fastest Chaser in ninth, while Kasey Kahne was 10th.

Outside of the top 10 were Chasers Jeff Gordon in 15th and Martin Truex Jr. in 19th. Other notables include pole sitter Denny Hamlin in 12th, Kurt Busch in 17th, Phoenix winner Dale Earnhardt Jr. in 20th, Brad Keselowski in 24th and the returning Matt Kenseth in 32nd.

The session did not pass without incident. Early on, Casey Mears spun exiting turn 2, but managed to avoid contact. AJ Allmendinger was not so lucky. The JTG-Daugherty Racing driver, racing with the late Justin Wilson‘s name above his window pancaked the right side of his Kroger Chevrolet in turn 4.

Final practice is scheduled to be run at 1 p.m. ET with coverage on NBCSN, weather permitting.