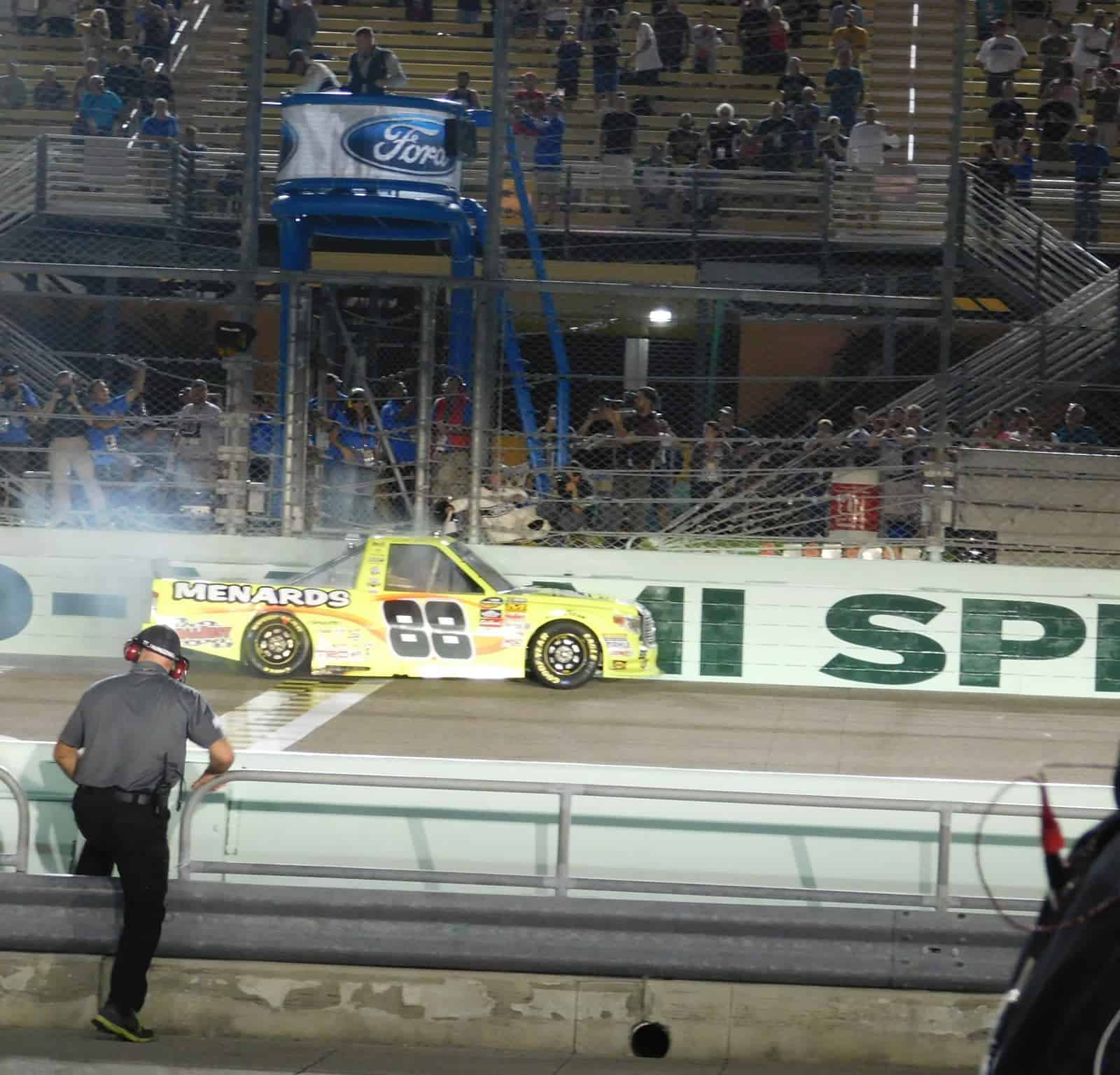 In a Nutshell: Matt Crafton claimed his sixth victory of the season in the Ford EcoBoost 200. Crafton swept a number of drivers who either stayed out or took two tires on the final caution and drove away from there to take the win. John Hunter Nemechek finished 2.942 seconds behind in second. Tyler Reddick was third, followed by Ben Kennedy and Timothy Peters.

Who Should Have Won: Crafton. Although Crafton led 93 out of the 134 laps, it was by no means easy. Early in the race, Nemechek was every bit the equal of Crafton. On long runs, Nemechek was better than Crafton early in the race. The Carl Joiner Jr.-led crew made adjustments to Crafton’s truck on pit road that greatly improved the No. 88’s pace on the long run.  That, plus Nemechek getting stuck further back in traffic, allowed Crafton to get to the lead and open up an unassailable gap.

Entering the race, all Jones had to do to win the championship was finish 15th or better. Under normal circumstances, that wouldn’t be so hard for the 19-year-old. However, he had to protect his lead, which led to a different style of racing.

“I feel like I kind of hate it for the guys, you know?,” Jones said after the race. “We had such a fast truck and I felt like I was just riding around all night and that’s what we had to do.”

Ultimately, Jones “rode around” to a sixth-place finish. That was more than enough for him to claim the title by 15 points over Reddick.

For the Nemechek family, Homestead-Miami Speedway is a somewhat solemn place.  In 1997, John Hunter Nemechek’s uncle, John Nemechek, died as a result of head injuries suffered in a turn 1 crash while driving his No. 8 Chevrolet. While Joe Nemechek drove at Homestead and had a good amount of success in the Xfinity Series, the team has never returned to the mile-and-a-half oval with a No. 8 Chevrolet until Friday.

The team ran a decal on the B-pillar in Nemechek’s memory and dedicated the evening to the fallen racer that John Hunter is named after. The race went really well for the 18-year-old. After falling back early, Nemechek charged to the front and took the lead from Crafton on lap 31. From there, he led to the first round of pit stops, lost the lead to Daniel Suarez and then regained it.

The middle portion of the race prior to the final stops saw a thrilling back-and-forth duel between Nemechek and eventual winner Crafton in which the lead was traded seven times. The final stops split the two up and Crafton’s restart allowed him to grab the lead and run away.

Nemechek was eventually able to get past Reddick for second, but he couldn’t run down Crafton, who was five seconds up the road by that point. Regardless, Nemechek seemed to be pretty satisfied with second after the race.

That one was for Uncle John. Hopefully he is smiling up there. I know he was looking over us. Almost got the win for him! #NCWTS #NASCAR

Suarez was one of the strongest drivers on-track early in the race, gradually coming up from the sixth starting spot to take on John Hunter Nemechek for the lead before the first pit stop. A good stop gave him the lead, but Nemechek was right on his tail. Everything was going all right until Suarez ran up on the lapped truck of Dexter Stacey.

Suarez drifted up and got loose while trying to avoid the No. 1 Chevrolet. Suarez spun to the apron and managed to avoid the wall, but Nemechek was able to get the lead back.

That was just the beginning of Suarez’s issues, as the truck didn’t react all that well to being back in traffic. Suarez’s progress to the front was stalled before contact with the wall ultimately ended his night.

“The truck was fine. We just blew the right front [tire],” Suarez said. “I believe we went through some kind of debris or something because it didn’t give me a warning or anything like that. I was turning into the corner and I was pretty much ready to get into the throttle and then the right front blew up.”

Points Update: By virtue of finishing in sixth on Friday night, Jones claimed the 2015 Camping World Truck Series championship, ending the year with a 15-point cushion over Reddick. Race winner Crafton made up some ground, but ended up third, 22 points behind.

The top-11 drivers in the standings did not change positions in the standings from Phoenix.  John Hunter Nemechek’s second-place finish allowed him to jump over Tyler Young and take 12th in points, despite missing five superspeedway races early in the season due to being too young.

Anderson moved up one place to 19th in points, jumping over Norm Benning in the process despite finishing 29th. Benning failed to qualify for Friday night’s race.

“Tonight’s win was awesome. The last two years, we haven’t been able to race here, and to be able to take the gloves off and don’t worry about a championship and just go out and win, nothing else was going to make us happy. So that’s what we did tonight. We had a phenomenal season. Six wins and 700 – I think they said 780 laps we led. That’s a pretty good season.  We just had one column that was bad for us: DNFs. I made mistakes and everybody made mistakes. But I promise you one thing, it’s going to make us stronger for 2016.” – Matt Crafton, race winner

“We knew that we were gonna have to come in here and lead some laps and win the race, and unfortunately, the [Nos.] 8 and the 88 were a little better than us, but our BBR Music Group F-150 was great tonight and our team’s done a great job all year long. I’ve really got to thank Roush Yates, Ford Performance, Draw-Tite Hitches, and all those guys who have helped me this year. It’s been a great year and it’s just a real shame I couldn’t get it done for our guys back home and everyone that comes to the racetrack every week. They worked really hard and I was hoping I could get it done for them in my first full-time year.” – Tyler Reddick, finished third

“Just a lot of momentum. It was so cool to get on the roll at Chicago and then in the last four races, we win two and just an unbelievable year. Thanks to everybody at Red Horse Racing for what they do – Toyota, Triad horsepower – just, you know, this is the kind of streak you dream about. I wish we could go to Daytona next week and start all over, but just a strong effort by everybody involved.” – Timothy Peters, finished fifth

“I think a lot of it was just being with a great team here in Kyle Busch Motorsports and bringing great Tundras to the race track every week. And I think there were definitely times in the year when I didn’t think we’d be able to do this and looking back and seeing the deficit we were in at some points and just being able to really pull together and make this all happen here at the end of the year, man, it was just so, so special for everybody here. And to close off this run like this – I’ve had a great three years with these guys and I couldn’t think of a better way to thank them.” – Erik Jones, finished sixth, 2015 Camping World Truck Series champion

Up Next: It is time for the drivers to relax as the season has come to an end. The 2016 season is due to start at Daytona International Speedway with the NextEra Energy Resources 250 on Feb. 19, 2016. Earlier this year, Reddick held off a swarming pack to take his first career Camping World Truck Series victory. The race will air live on FOX Sports 1.

So nice to watch a truck race and have no Cup guys in it.