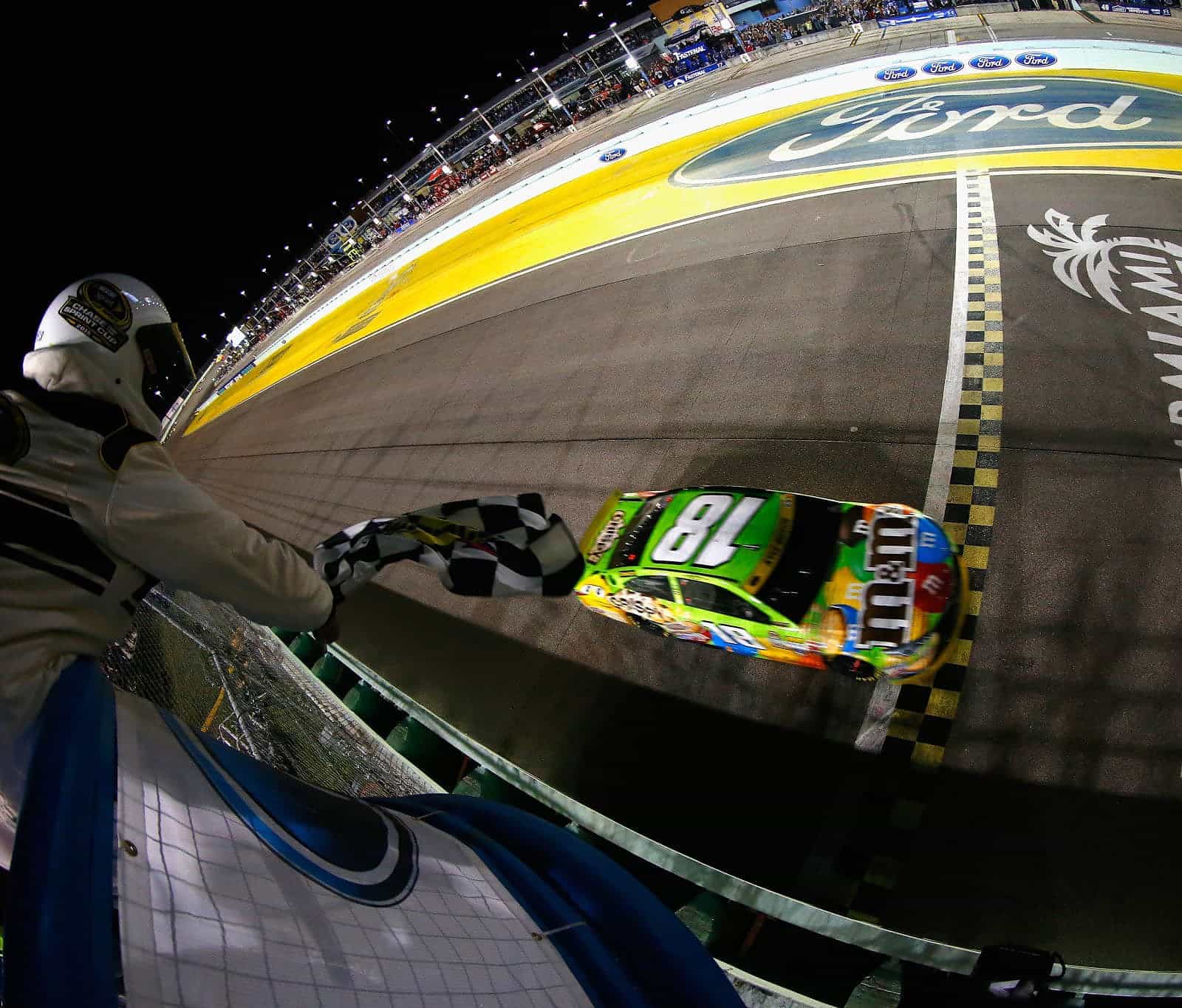 Overcoming near-impossible odds through the 2015 NASCAR season, Kyle Busch capped it off with a win in the Ford EcoBoost 400 at Homestead-Miami Speedway and his first Sprint Cup Series championship, holding off reigning title holder Kevin Harvick.

“I dont know that anybody could have ever dreamed of this year,” Busch said. “To have dreamed of my career path the way it’s kind of gone. It’s certainly amazing to have the opportunity right now to be in this position with Joe Gibbs and Adam Stevens. For them all to prepare such a great racecar for me tonight to be able to go out there and perform and in this format and do what we did to end up in Victory Lane. To win this championship by winning the race was something special.”

Missing the opening 11 rounds of the season due to leg and foot injuries suffered during the Xfinity Series event at Daytona, Busch ran out of the gate in his return to Sprint Cup Series racing with three consecutive wins at Kentucky, Loudon and the Brickyard 400 at Indianapolis.

The championship is the first for Toyota and fourth for team owner Joe Gibbs.

“It’s such a great sports story,” said Gibbs who won his first Sprint Cup Series title in 10 years. “We’re going to get J.D. [son] up there for the trophy. We got the whole family here.”

“I thought there at the end that the restart,” Harvick said, “we might do a little better than that, but obviously either the splitter was on the ground or the car was just tighter than it probably needed to be. I couldn’t hustle it and got it tight and got it up the racetrack and got behind.”

With three victories included in career-high marks such as top-five finishes (23), top-10 finishes (28) and laps led (2,294), Harvick won’t let the disappointment of a title loss overshadow his immense success in 2015.

Brad Keselowski finished third after leading a race-high 86 laps before a late-race yellow brought one last round of pit stops and a restart with seven laps to go. Once Busch stormed out with the race lead, Harvick pounced on Keselowski, ending the Blue Deuce’s shot at victory.

“I was really proud of my team tonight, really happy with what they were able to give me,” Keselowski said. “We just didn’t quite have enough at the end on that final restart to hold those guys off.”

Another driver who found victory once in 2015, Jeff Gordon, will be feeling victorious for years to come as he closed his Sprint Cup Series career Sunday night, finishing sixth en route to third in the championship.

“I think had I won this race and this championship,” Gordon said, “it would have been perfect. I don’t think I could have accepted that. I wouldn’t have known how to.”

Following a lap 36 restart, Gordon made a three-wide move into turn 1, grabbing the lead for nine laps, the final laps out front in his career.

“Ill be honest, the competitor in me got so caught up in the moment,” he said, “in the race where we took the lead and I got really excited. I thought, ‘OK, we got clean air, let’s see what we have.’

“I felt like when we got ahead of Kyle [Busch] and that we actually pulled away from him. I kind of got excited, got my hopes up there but then Kevin started coming on pretty strong.”

Having a past teammate in Busch taking the championship, Gordon says he has seen a true change in Busch’s drive in 2015.

“I will say, what he went through this year,” he said, “I see a changed Kyle. I don’t know what it is, I’ve never talked to him and got into details about it. But when he came back, you can tell he was racing smarter with more patience, more deliberate.”

The final championship contender was Martin Truex Jr. who struggled in his No. 78 Furniture Row Racing Chevrolet throughout the 400 miles. Leading three laps, Truex had a difficult day in Miami, suffering a small on pit road and being the forefront of pit strategy. The night ended 12th, securing Truex fourth in final driver points, the high points finish for both Truex and the FRR team.

“Just a little disappointed in the way we ran here,” Truex said. “This used to be a really good track for me, and the past two races it’s just been a struggle. We just couldn’t get it to do anything we wanted. A little frustrated in that, but a great effort, and I guess you have days like these. Just unfortunate it was when everything was on the line.”

The final event of 2015 ran rather clean as the day’s longest green-flag stretch lasted nearly 100 laps and staying on the lead lap was key to staying alive in the race.

The cleanliness cant be said for a lap 47 smash that swallowed up Dale Earnhardt Jr., Aric Almirola and Clint Bowyer who finished his final race for Michael Waltrip Racing in the 42nd position.

“I don’t know what the hell happened to our car,” Bowyer said. “You hate to end this way. I wanted to end on a strong note for everybody at MWR. I appreciate their hard work and efforts all these years. Unfortunately it’s over.”

Though Denny Hamlin started from pole, he ran into issues in the opening laps as the No. 11 Toyota was seen smoking into turn 1 with a flash of fire appearing under the car. Hamlin still rebounded from three laps down to finish on the lead lap in 10th.

Sweet ending to a season with such a sour beginning for Kyle Busch!