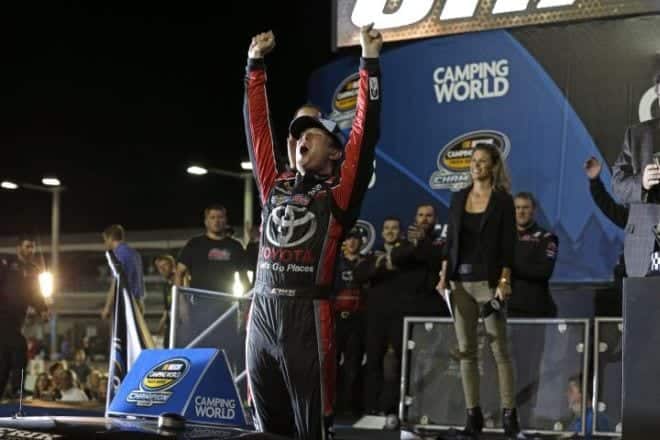 Sprint Cup Series: Kyle Busch Claims the Sprint Cup – On Sunday evening, a sellout crowd watched the final race of the Chase for the Sprint Cup, the Ford EcoBoost 400. The thought going in was that you probably would have to win the race to take the title. For most of the race, that did not appear to be the case.

In regards to the Chase, it was a complete toss-up early in the race. Kyle Busch led early on, then Jeff Gordon brought the loud and proud crowd to their feet when he took the Chase and race lead on lap 36. Later on, Kevin Harvick re-assumed control as Gordon’s car began to fade with the sunlight. The four-time Champion bid farewell to driving in Sprint Cup after 23 full seasons with a sixth-place finish and a third-place finish in points.

While he was nowhere near as dominant Sunday, Brad Keselowski had a very strong Ford Fusion on the same tires that he nearly won on at Texas. After overcoming an early penalty due to having too many men over the wall on his first stop, Keselowski snatched the lead away from Martin Truex Jr. on a restart and proceeded to pull away from the pack. On the long runs, Keselowski’s car began to fade just slightly towards the end. That’s when Kyle Larson‘s car came to life. Using the outside line to his advantage, the sprint car veteran made a number of moves to get himself up to the front late in the race. A late debris caution bunched the field up and allowed Busch to get past on the restart. Harvick followed Busch into second, but could do nothing with the M&M’s Toyota as Busch claimed the win and the championship.

It is the fourth Sprint Cup championship for Joe Gibbs Racing and the first since the team switched to Toyota in 2008. Despite being being the Chase in nine of his 11 seasons in Sprint Cup, Busch had never won a Chase race prior to Sunday. He picked a great time to fix that, and in the process, capped off the most extraordinary year of his life in the best way possible. – Phil Allaway

Xfinity Series: A well-deserving champion – It has been a long year for Chris Buescher. His team was not the quickest on a weekly basis, nor did he contend for victories often. However, making the most out of tough situations, the No. 60 team had a worst finish of 20th, providing more consistency than any of the championship contenders.

After a steady run just outside of the top 10 throughout Saturday’s 300-mile race at Homestead, Buescher finished 11th to clinch Roush Fenway Racing its fifth NASCAR Xfinity Series title. In doing so, he became the first full-time driver in the team’s history to not record a DNF in a full season. His consistency running inside the top 10 paid off, holding off reigning champion Chase Elliott, who is now set to replace Jeff Gordon in the Cup Series. – Joseph Wolkin

Camping World Truck Series: A Fitting Farewell – Back in September, JGR announced Erik Jones would be moving to the NXS to join the organization’s stable of drivers in the natural progression through the NASCAR ladder. It was a fitting move given the quick success he had found in the sport and the role he’s played multiple times in a substitute role with the team. But before that move in 2016, there was business to finish in the Truck Series: win a championship.

The driver of the No. 4 Toyota did just that on Friday night at Homestead-Miami Speedway. Holding the top spot in the standings since his victory at Canadian Tire Motorsports Park, Jones needed only a mediocre 15th-place finish to wrap up the title and become the youngest champion in series history. Never a threat for the win, the Michigan native struggled with handling for much of the early stages of the race before settling in for a sixth-place finish, enough to take the championship by 22 points. What a fitting way to say farewell to the Truck Series. – Beth Lunkenheimer

Short Tracks: Homestead-Miami Speedway wasn’t the only venue that crowned champions over the weekend. The SRL Southwest Tour was in the same city in which NASCAR Sprint Cup’s best will be traveling to in a couple weeks for their banquet, Las Vegas. Six drivers entered the finale at the Bullring at Las Vegas Motor Speedway with a mathematical shot at their first career title in the asphalt late model series. Ryan Cansdale won the battle, the first of his young career, but it was Jacob Gomes who finished fourth and claimed the war. Greg Voigt, driving for NCWTS team NTS Motorsports, entered the race with a slim three-point advantage but finished 15th a lap down. Voigt’s teammate Parker Stephens, son of former NXS and K&N West driver Dirk Stephens, claimed Rookie of the Year honors.

The USAC National Sprint Cars concluded their season at USA Raceway in Tucson, Ariz.  with three talented winners in three nights. A win on the opening night (his 13th of the season) plus a fourth- and a second-place finish locked up the championship for Robert Ballou. Brady Bacon and Bryan Clauson captured the checkers on the ensuing nights. Co-sanctioned with the western CRA Sprint Car Series, Damion Gardner won his fourth career crown among those competitors.

In North Carolina, Brandon Setzer, who lives only minutes from Hickory Motor Speedway, won the PASS South Super Late Model race at the track his father Dennis Setzer had much success at early in his career. The championship battle came down to only a matter of points with teenage second-generation racer Tate Fogleman taking the title over transplant Californian Zane Smith. Smith had an impressive point lead only a couple races before but was penalized for rough driving after the checkered flag last month, thus thinning the points battle. Smith finished four spots ahead of Fogleman on Saturday night, but it wasn’t enough to overcome the deficit.

There were also races in which no points were on the line. Myatt Snider, son of NASCAR announcer Marty Snider, picked up the biggest win of his young career at Myrtle Beach Speedway holding off some of the best in the late model stock car business, Tommy Lemons Jr. and Lee Pulliam, in the running of their UNOH Battle at the Beach 200-lap event. George Brunnhoelzl III passed Matt Hirschman late to take the winning honors in the Modified feature. – Aaron Creed

Sports Cars: IMSA Hosts Special Daytona Test – Last week, IMSA held a closed-to-the-public test session at Daytona International Speedway where a number of new machines were strung out on the 3.56-mile road course. A number of new GT3-spec racers for the GT-Daytona class made their debut. For example, Mercedes (which is still trying to get a manufacturer agreement for 2016 with IMSA) had the American debut of their new for 2016 AMG GT with a factory squad. In addition, the move to GT3 rules for GT-Daytona means that the SLS AMG GT3 will now be legal as well. Elton Julian’s DragonSpeed team brought two SLSs to the test. Previously, the car was considered to be too wide for the class.

There were only a few prototypes on-site, but there were some notable entries. Michael Shank Racing with Curb-Agajanian was testing a new, larger HPD engine in their Ligier JS P2, designed to better cope with the power requirements of the class. Longtime Chip Ganassi Racing driver Scott Pruett was driving the No. 5 Chevrolet Corvette DP Evo for Action Express Racing, which he will race at Daytona and Sebring. Those are his only scheduled prototype starts for 2016 as he will transition to the new factory Lexus program with the Lexus RC-F GT3 later this year.

Lamborghini had one Huracan GT3 on site for all of their assembled drivers to try out, provided by Change Racing via Grasser Motorsport. Audi also had a 2016-spec R8 LMS GT3 on-site for the teams to try out.

CGR had two cars (Nos. 66 and 67) on track with a group of drivers on hand to turn some laps. Four of those drivers were announcedSaturday at Homestead-Miami Speedway. The endurance-only drivers will be announced at a later date. BMW Team RLL also tested the new GT-Le Mans spec M6 for the first time in public.

There is still more testing to come at Daytona. The Roar Before the 24 is scheduled for Jan. 8-10, 2016 and will see many more teams preparing for the Rolex 24 at Daytona. – Phil Allaway