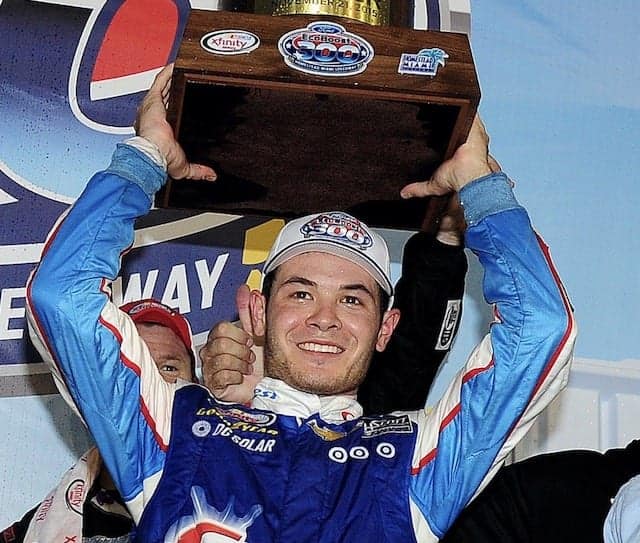 For much of Saturday’s Ford EcoBoost 300, Kyle Larson and Kyle Busch dominated the proceedings. After an early competition caution, the duo ran off and hid, and by the halfway point, less than 10 drivers were on the lead lap.

By the time the third caution flew on lap 118 for Josh Reaume hitting the wall in turn 4, a mere four drivers were still on the lead lap. Even with cautions putting Brian Scott and Ryan Blaney back onto the lead lap, the race was going to be between Larson and Busch, who would combine to lead 182 of the 200 laps.

Busch was eliminated from contention due to an uncontrolled tire during the final pit stop. Austin Dillon inserted himself into the equation late by going three-wide on a restart to snag the lead from Larson, but he never moved his line high enough to block Larson’s progress.

As a result, Larson was able to charge back up from fifth in the final laps and catch Dillon, who tried at that point to block the move, but only managed to put himself in the wall. The result was Larson made the final pass look easy as the Sprint Cup regular strode away to his third career Xfinity Series victory.

Chris Buescher brought his Fastenal Ford home in the 11th spot, and that was more than good enough to bring home his second major stock car racing championship, following one in the ARCA Racing Series.

Buescher’s final margin was 15 points over Chase Elliott. Ty Dillon was three points behind Elliott in third, while Regan Smith was 22 points back in fourth. Daniel Suarez’s sixth-place finish on Saturday allowed him to jump Elliott Sadler for fifth and the final spot at the banquet next week. Suarez was also named 2015 Sunoco NXS Rookie of the Year after the race.

While Scott was still unable to get himself to Victory Lane in 2015, he really has nothing to be ashamed of. Saturday saw Scott and Richard Childress Racing’s No. 2 team bite and scratch its way through the race. Scott dropped back early, but worked his way back through the field during the long green-flag run. He didn’t really have anything for Larson or Busch, but he managed to keep himself in position to get the Lucky Dog when Reaume hit the wall.

From there, the team made improvements on the Shore Lodge Chevrolet and allowed him to move up to fourth by the finish in what could likely be Scott’s final race at RCR. At the present, there is supposedly a “sweepstakes” for Scott’s services (and sponsorship) in 2016 and any good runs on his resume only sweeten the deal. Regardless, he’s still very hungry for that win.

On Friday, Sadler looked to have some good speed. He turned in the second fastest time during practice and hopes were high for Sadler to give Roush Fenway Racing a pleasant farewell. Qualifying was decent enough for Sadler. Eighth isn’t a bad starting spot, especially with everyone gravitating toward the outside line for the additional banking and extra momentum.

Unfortunately, when the race got going, Sadler dropped out of contention quickly. Ultimately, Sadler spent much of the race just barely inside of the top 20 and eventually fell two laps down. With the use of a wave-around and some passes late in the going, Sadler was able to move back up to 13th by the finish. However, Homestead ended up being a missed opportunity for Roush Fenway Racing to give Sadler a proper sendoff. Getting booted off the stage of the banquet in the final race of the season has to hurt a little bit.

The quote often attributed to Vince Lombardi says, “Winning isn’t everything.  It’s the only thing.” Busch encapsulates that mentality in the NXS better than any other driver.

On Saturday, he most definitely had one of the two best cars on the track. For 174 laps, Busch was in position to potentially win the race. On the final pit stop, the No. 54 crew got Busch off pit road first, but in the process, lost control of one of the tires. That resulted in Busch getting sent to the tail end of the pack.

When it rains, it pours. Right after the restart, Sieg got loose exiting turn 4 in front of Busch. Busch backed off to give Sieg recovery room, but that resulted in Busch getting hit from behind by Wallace. Busch then spun and nosed into the inside wall. The team attempted repairs, but Busch chose to pull it in for the day, taking a very disappointing 30th-place finish in a race that they very well could have won.

Saturday was also the XFINITY Series debut of Tim Viens, best known as a part-time competitor in the ARCA Racing Series, in the No. 74 for Mike Harmon Racing. Viens’s debut will likely not reflect well on his abilities. He was lapped within the first 10 laps of the race, then spun in turn 1 while the leaders were passing him to draw the first caution. Later in the event, NASCAR warned Viens that he needed to pick up his speed or he could be black-flagged. He was able to pick up his pace at the time.

Later, Viens was penalized for speeding entering pit road, then sped again while trying to serve the penalty. That earned Viens a rare stop-and-go penalty. Then Viens’s pace became an issue again and NASCAR posted the No. 74. At that point, Viens pulled behind the wall for repairs. Team owner Mike Harmon took over the car and drove the rest of the race, eventually finishing 33rd, 44 laps down.

While Viens wasn’t necessarily competing in the best equipment, it appeared that he just wasn’t getting the job done on Saturday. NASCAR assesses approval on a race-by-race basis with relatively new drivers. Don’t be surprised if NASCAR quietly makes some kind of a move here.

Underdog Performance of the Week

Once again, the strongest of the small teams at Homestead was the No. 39 of Sieg for Ryan Sieg Racing.  Sieg started 16th and raced among the championship contenders for much of the day before dropping back as the field became severely spread out.

By the end of the race, Sieg was a lap down in 14th for his 10th consecutive top-20 finish. Sieg ended the season 11th in points, 75 out of 10th. It may not sound like all that much, but finishing there is quite an accomplishment for a small team based in Georgia, outside of the traditional sphere of influence in North Carolina.

Saturday’s Ford EcoBoost 300 is what you would get if you took last weekend’s DAV 200 – Honoring America’s Veterans, added a second dominant car and longer green-flag runs. You had a much better race at the front of the field, but everyone else simply wasn’t in the same league.

Buescher didn’t have a great race on Saturday, but he didn’t have to. Once again, none of his competitors for the title could truly kick it up a notch when they needed to. Yes, there were marginal gains from Ty Dillon, Elliott and Smith, but it wasn’t enough to make any kind of a real difference.

The form shown by Busch and Larson resulted in only four drivers on the lead lap by lap 115. That’s essentially unheard of these days unless something unusual happens. The last time a race finished with that few cars on the lead was at Talladega in 2002, a race that definitely covers the latter scenario. That race was marred by a massive crash on lap 15 that involved almost every potential contender for the win, save for three (Stacy Compton, Jason Keller and Kenny Wallace). Wallace dropped out due to engine problems late, leaving Keller, Compton and current spotter Tim Fedewa (in a car that was supposed to start-and-park) as the only drivers on the lead lap.

Had that crash not happened, you would have had a lot more drivers battling it out at the end. This whooping was on merit.  It actually says quite a lot about the NXS at the moment. If you really hit on it, the rest of the field’s in trouble.

With Busch dropping out late, Larson had the best car on the track when it counted. HScott Motorsports with Chip Ganassi also had the best driver when it came to manipulating the racing line right next to the wall. It was impossible to overcome.

Finally, the outside wall is likely to play a huge role in Sunday’s Sprint Cup season finale. The championship could turn at any time because of one false move.

Good: One of the fastest cars won in spite of seemingly unnecessary caution flags.

Bad: One of the fastest cars wrecked as a result of seemingly unnecessary caution flags.

Final Word: Congrat’s to Buescher for winning what may well be the last Grand National Championship the hard way, without an asterisk.

Poor Phil has to write about unfortunate combinations. Normally, it involves Michael Waltrip with a microphone and today, an XFINITY race with Cup drivers.