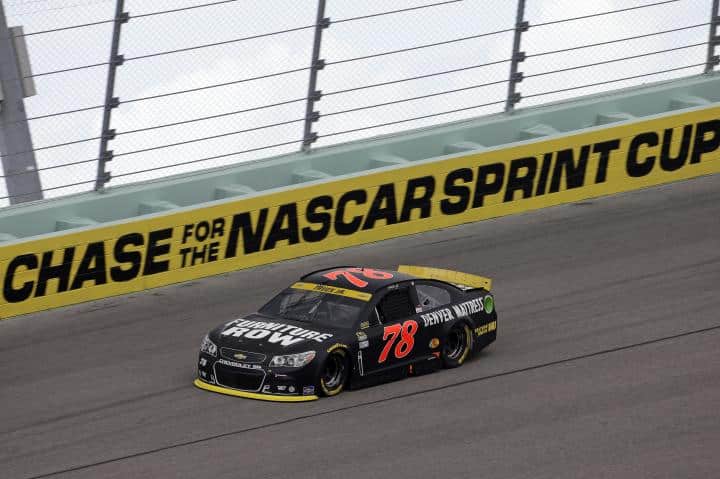 Had it not been for a piece of debris – about which there is some debate about whether or not it was actually in the racing groove – Kyle Larson might have had his first Sprint Cup win in the bag. Larson won the Xfinity Series race at Homestead Saturday and was closing fast on leader Brad Keselowski Sunday when the caution flew for the debris. Larson’s car wasn’t as strong on restarts as it had been on long runs, and he fell to fifth on the final tally. Larson, who ran so close to the wall that at times he seemed to defy physics, has struggled a bit in his sophomore season, but served notice Sunday that he’s still very much a star on the rise.

What… is on my mind after the race?

While riding into the sunset a champion would have been the stuff of legend, really, Jeff Gordon had long ago achieved legend status in the sport. He didn’t need to prove anything. His 93 wins, good for third all-time – and he’s the only driver in the top three to have raced entirely in the sport’s modern era – and four championships speak for themselves.  But while what Gordon did in the sport is monumental, what he has done for the sport is immeasurable.

Gordon bridged a generation gap in NASCAR, helped bring a blue-collar sport to a white-collar audience and provided the perfect white-hatted protagonist to Dale Earnhardt. Well-spoken and comfortable in NASCAR’s emerging corporate environment, Gordon backed up his sponsor-friendly persona on the track, where he was once roundly booed because he won so much and seemed so perfect. Gordon also proved to have an eye for talent, and when car owner Rick Hendrick offered him ownership in a brand-new team as part of a long-term contract, he picked a young driver nobody else saw much in. Gordon has six championships as a car owner because he saw something in Jimmie Johnson other than a Watkins Glen highlight reel.

Gordon’s absence will be keenly felt by his fans and by race fans in general. Just as it took a long time for fans to stop looking for Earnhardt on track in that No. 3 after his untimely death, it will be a while before they stop looking for that rainbow-colored No. 24 with Gordon behind the wheel. The car will still be there, with youngster Chase Elliott, but sponsor Axalta, which was with Gordon from day one, will move to Dale Earnhardt Jr.’s cars next season. If the sport is divided into eras, then the Jeff Gordon Era is right up there with the best years the sport has ever seen. Other than Richard Petty and maybe Earnhardt, no driver has done for the sport what the driver once called Wonderboy has in the course of his career. #24ever, indeed.

Denny Hamlin won the pole and them promptly had rear gear issues when a lubricant seal failed. He spent three laps in the garage, but thanks to some well-placed cautions, Hamlin regained the all three laps and finished 10th. He is headed for offseason ACL surgery and a 2016 season that could be pivotal to his career as Joe Gibbs Racing can only keep Erik Jones waiting for a ride for so long.

Kevin Harvick entered the race as the title favorite, having won the race and championship a year ago and having been strong this season as well. He ultimately fell just short, finishing second, in what has become the theme for his season. The year was still a success for Harvick, who was almost always a threat to win. In just two years with Stewart-Haas Racing, he surpassed his laps-led total for his entire tenure at Richard Childress Racing and will no doubt enter 2016 among the favorites to take it all a year from now.

While it didn’t affect the championship, an early mishap started by Clint Bowyer certainly illustrated how someone else’s problem can become another team’s problem in a hurry. While it seemed like a small blemish in the scheme of the race, it was very costly for some of the drivers involved. Earnhardt Jr. fell out of the top 10 in points and off of the stage at the banquet in Las Vegas. Casey Mears, who had been the top small-team driver all season long, lost that title-race-within-a-title-race to AJ Allmendinger, and to those teams, that’s a big deal. Aric Almirola was lucky that Kasey Kahne also had issues; he held his points position over Kahne by a single marker. The only drivers who didn’t take a points hit were Bowyer and Sam Hornish Jr., who plowed into Mears after Mears cleared the initial spin. The incident certainly illustrated the significance one driver’s mistake can have for the entire seasons of others.

Why… did Busch win the race and the championship?

At the end of the day, when it counted, Busch’s team was best prepared for the changing track after a rainstorm delayed the race and gave teams a green track and a day-night transition to contend with. The No. 18 team made his car faster than the competition when it counted, and a late caution gave him a shot at the win as well as the title. It’s a controversial title for Busch, who won four races before Sunday but missed 11 due to injuries sustained in an NXS crash at Daytona. NASCAR gave Busch a medical waiver into the Chase, and he took the title, leaving some fans wondering if he’d really earned it this year. The crash also made Busch grow up, though, and may ultimately be why he won. He no longer races with an air of entitlement or a checkers or wreckers attitude, and that’s made him a better driver overall. He’s finally gaining maturity to match his talent.

Martin Truex Jr.; Furniture Row Racing: This team by far outperformed its peers in 2015, to the extent that it really can no longer be considered a small team by the standards of the others on this list—this group has earned a position among the sport’s elite. Next season brings a switch to Toyota, factory support and a partnership with Joe Gibbs Racing. It doesn’t look like they’re going anywhere but up for a while. It was a storybook season for this team, title or not.

AJ Allmendinger; JTG Daugherty Racing: Allmendinger didn’t match his 2014 Chase season, but he did have a solid year.  There’s a lot of pride for the small teams in being at the top of the heal among the other teams in this group in both individual races and points, and Allmendinger took that top points spot Sunday, giving his team some bragging rights for the winter. They need to work a bit on consistency in 2016, but with Allmendinger locked up for five more seasons, they can move forward with confidence.

Casey Mears; Germain Racing: Mears was at the top of the small-team leader board until Hornish knocked him out of the race Sunday, and this team has grown by leaps and bounds over 2014. If Allmendinger is a threat to win on a road course and slide into the Chase, the same can be said for Mears on the restrictor-plate tracks, where he excels. As a random aside, Mears also knows just how Larson feels after this race. Mears had his first win well in hand, leading late in the race at Homestead in 2005, in the Target car… and a late debris caution took it all away. Maybe lightning does strike twice…

Bigger question. When is Brian going to change the name to Brian’s Fantasy Races?

Did you see him yesterday on the podium? He looked like a train wreck. Guess the party started early for him yesterday.

I didn’t think he would show up. I guess he was in the tower to give the order for the last “debris” caution of the season. Is there an open bar there too? I wonder if he crashed his Toyota Lexus on the way home.

Besides the Bowyer mistake costing teams yesterday, let’s not forget that because of his role in Spingate, there are hundreds of people without a job today. I thought it was quite disingenuous to ask him about the last race for MWR and give the appearance that he was a sympathetic figure when the blood for MWR’s demise is all over his twitchy wrist. Would have been nice for Truex to win on that alone but it wasn’t meant to be.

RG… I’m not comletely absolving Bowyer for his role in spingate, but remember… he was following orders from his employer.. The “bllod from MWR’s demise” is on Waltrip’s hands. Michael is and has always been sorely lacking in any shred of integrity.

Very well written Amy…
How many days until Daytona? I’m in withdrawal already… Wellll….. that might be a little hangover from the homemade Apple Pie :)