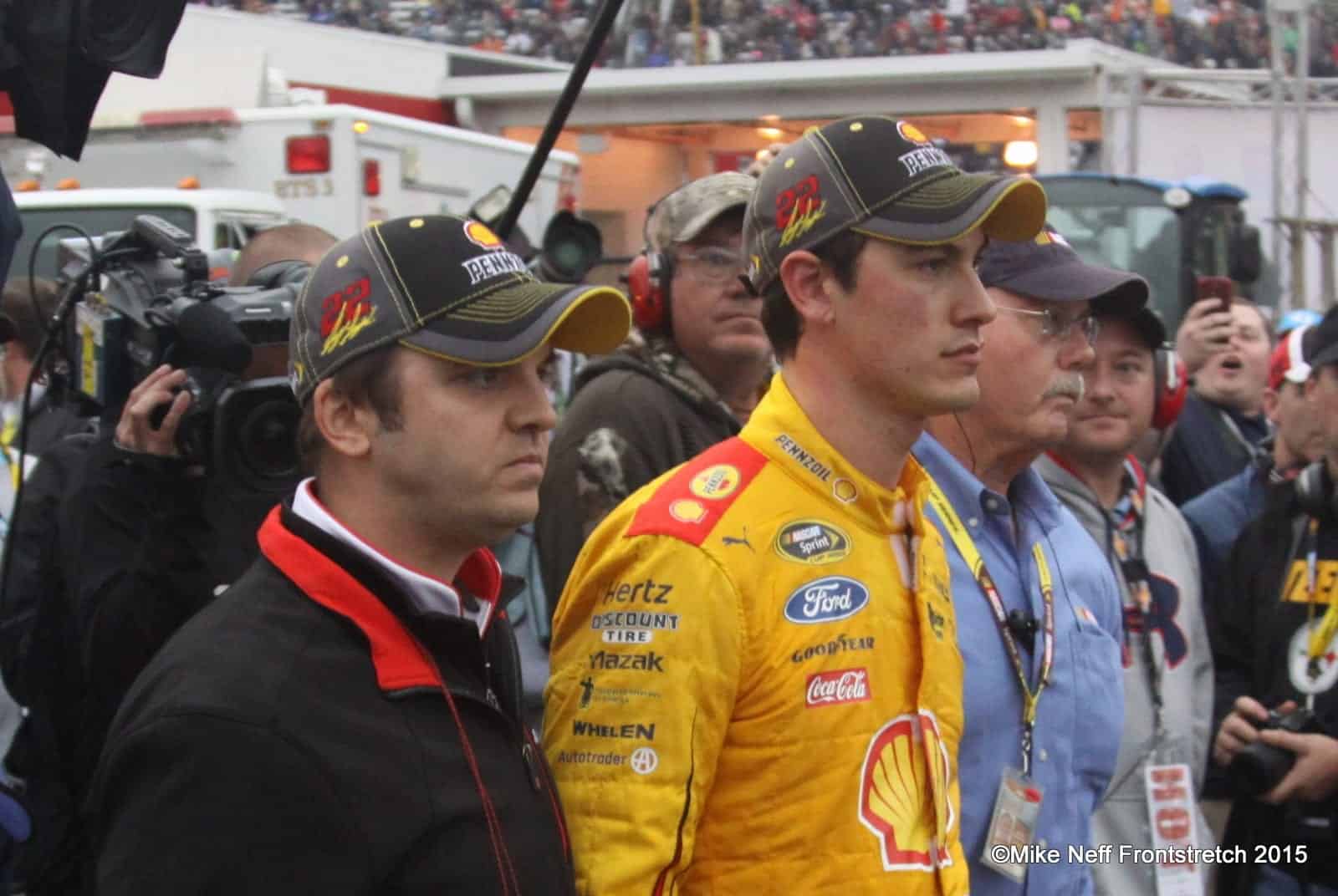 1. Everybody should be looking over their shoulders.

Sure he’s had issues that have ultimately put him out of the running for the title, but Joey Logano isn’t going away anytime soon. He’s got more wins over the last two seasons than any other driver, and he’s a threat just about anywhere. In 2014, a bad pit stop at Homestead may have cost him the title, and this season, he got a little too cocky for his own good and was knocked down a peg because of that. But Logano has enough talent behind the wheel that he’s the guy everyone else needs to sleep with one eye open for, because he’s not going to make mistakes forever. When he puts it all together, he’s going to be formidable.

2. Two years in, it’s obviously not all about winning.

When NASCAR announced the elimination format for the Chase, it came with the promise that it would put more emphasis on winning; that winning would be the single most important factor in determining a champion. Except it’s painfully obvious that winning isn’t really that important at all. While a win in the first 26 races will get just about any driver with any shot at an upset victory a ticket into the Chase and will move a driver on in the title race even if he finishes 43rd two weeks in a row, it does little to determine the actual champion. It does little to decide who even has the right to race for the title at Homestead.

When the three drivers with the most wins through the first 35 races of the season are ineligible to compete for the championship, it’s not truly about winning. Call it about surviving the postseason, call it about not getting wrecked in the Chase so you don’t need to win. Call it about getting in if you win or earn enough points – which method you employ doesn’t really matter. But don’t say it’s all about winning.  Because it’s really not.

3. There are changes on the horizon.

A couple of big things are coming down the pike. First, NASCAR is likely to adopt a low-downforce package for 2016, similar to what fans saw at Kentucky and Darlington. While it won’t fix aero-dependence because it doesn’t address the too-low front end, it is a step toward better racing. That can only be a positive, and the races where NASCAR battle-tested the package were a success. Hopefully fans will realize that no matter what package NASCAR runs, every race will not look like the epic Ricky Craven–Kurt Busch classic at Darlington, and that needs to be okay. That’s just not how the sport works, and viewers need to understand that a larger margin of victory or a win based on strategy isn’t the end of the world, just a part of it.

The other thing that might be coming for 2016, and is almost a certainty eventually, is some form of program to guarantee teams starting spots and a piece of the pie. The most recent speculation has NASCAR giving out those guarantees to full-time teams based on longevity in the sport. Think Wood Brothers Racing and Leavine Family Racing randomly decided to go full-time next year due to a sudden influx of money? Think again. That would give Wood Brothers Racing first dibs and could, depending on how many of them NASCAR hands out (rumor has it at 36), leave Carl Edwards and Kurt Busch’s teams out in the cold as it could be by the individual race team and not the overall organization. Those teams would have to qualify on speed each week. The system would be a boon to the teams who get in as it would assure them a return on investment. The downside is that the program discourages growth in the sport even among the big organizations; a third team for Team Penske, for example, would be at the back of the line, and a new smaller team would have a hard row to hoe to make any races at all. Plus, without some kind of revenue sharing or purse redistribution, there’s little benefit for many of the teams in the first place.

4. Jeff Gordon could be the tip of the iceberg.

Gordon’s engine fell silent for the final time last weekend, and Tony Stewart will follow him off the stage next year. But there could be many more vacant seats coming up in the next few years. Most top drivers aren’t racing until age 50 anymore, and if mid-40s becomes a realistic age to hang up the driving shoes, that could easily mean that by 2020, the NASCAR landscape could drastically change. By the end of that season, 22 drivers who raced in at least one Sprint Cup race this season will be over age 40, including 13 full-time Cup drivers. Five full-timers, not counting Stewart, will be 40 or over by the time the 2016 season begins with several more reaching that birthday during the year. No, they won’t all retire at once, but the landscape will likely be very different five years from now. The question then becomes, who is going to replace them?

5. Cup teams aren’t developing drivers at the rate they once were.

While development teams were once something all the major Cup operations jumped into with both feet, the model has dwindled. Some owners have farmed out their development programs to drivers wanting to dabble in ownership, at least to a degree. Joe Gibbs Racing uses Kyle Busch Motorsports that way. Team Penske uses Brad Keselowski Racing, and Hendrick Motorsports has JR Motorsports. Roush Fenway Racing and Richard Childress Racing have programs, though the RCR program has been largely pay to play rather than a true development effort.

The other issue is that so many sponsors now want teams to run their Cup drivers in the lower series instead of backing full-time youngsters. Because the big teams eagerly allowed that model to happen in the late 1990s and early 2000s, the smaller sponsors were driven out of those series, and there wasn’t much of a long-term gain. Development programs have regained some health in the last couple of years, and they’re going to become vital in the near future.

I harken back to the day this season where Logano was the blocker and Harvick was the blocked. Harvick held his line. Logano said it was racing, expected it, and didn’t expect any apology or phone call. Why is the narrative different and why is he held to different standards? Never a word from you people as to the “horrors” of this move if somebody else does it, in your words..”that’s racing” . Matt and the old bitties are fearful of him in a racing threat, week in and week out…he is nipping at their heels. I am not making it up, fact. I truly believe it, how else can one account for Matt’s desperate and pathetic act? Unless you are one of the goobers that love the piling driving 10 laps down. If Matt thought that would change Logano’s driving, I am sure he is mistaken. Matt maybe should audition for the booth? Then maybe he can bash him more in a more professional way? Just sayin’ and askin’.

And not only nipping at their heals, but beating them and beating them good. Too bad the format has created a inflated false of what a Champ should be, winning, top 5, top 10’s…etc. Means nothing.