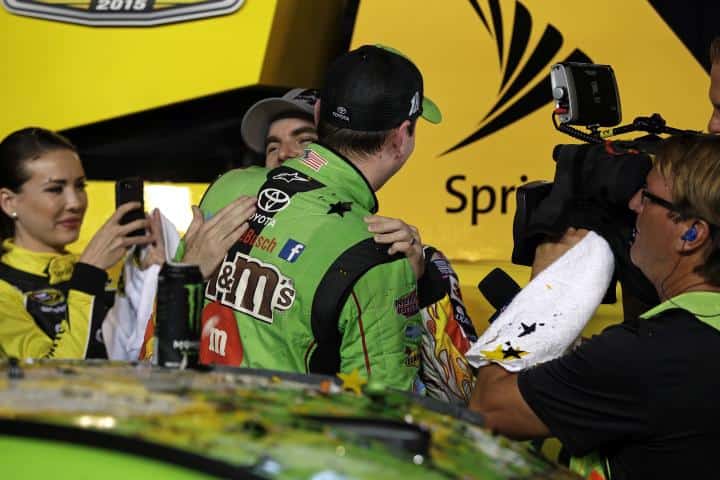 grKyle Busch is your 2015 NASCAR Sprint Cup Series champion. Who would have thought that would be the case after Daytona in February? I was in attendance for the Xfinity Series race in Daytona and never would have thought Busch would have battled back from that incident to win the championship. This championship has helped cement Busch’s legacy as one of the best drivers in NASCAR.

You have to wonder if the long layoff actually helped Busch get rested and be ready to go for the stretch run of the 2015 season, which is why there has been a lot of criticism of Busch’s wavier. However, Busch won the championship, fair and square. He didn’t break any rules and he had to battle his way back to make the top 30 in points and win, which he did. There’s no doubt Busch belonged in the championship conversation and he is the right 2015 champion. I’m not in love with this format either, but you can’t take it out on the driver who won based on the same set of rules as everyone else.

Also this weekend, we saw the end of an era as we witnessed Jeff Gordon‘s final Sprint Cup Series start. Gordon is third all-time in wins with 93 and has four championships. He is a first-ballot Hall of Famer. Can NASCAR recover from Gordon’s loss? That remains to be seen.

Q: You know, I loved that race until that crap caution that came out with 11 laps to go. Brad Keselowski got screwed out of a win. Typical NASCAR throwing debris cautions on purpose. Dave – Johnson City, Tenn.

A: I think we all thought the same thing when we initially saw that caution flag fly with 11 laps to go, and it’s a shame we are even having this conversation. The fact that anyone can talk about something like that happening and be serious is sad but you know what? Your allegations are warranted in my eyes, as I do believe that NASCAR throws caution flags to spice up the competition, especially since double-file restarts have been instituted.

Whether or not that caution flag was intentional or not, the sad part is it really ended what could have been an outstanding finish. Kyle Larson was chasing down Keselowski for the lead and he was closing fast. The second-year driver could have very well won his first career race. His car was faster on the long run, but wasn’t very good on the short run, which is what killed his chances with that late-race caution.

I enjoyed the long green-flag run and thought that was a great way to end the race, especially because NBC left the race on it’s network so most fans could see the race in its entirety, despite the fact that the race ran well past its scheduled time slot because of rain. That is part of the reason why I think this one was legit. There was some debris low in the groove on the frontstretch, so they may have been playing it cautious, but again it’s not like they haven’t done that in the past.

However, you know NASCAR wanted to get that race done as quickly as possible due to the fact that they didn’t want it to rain again and NBC was threatening to move it to NBCSN. That factor alone means NASCAR wanted to see it run green, in my eyes.

Q: The average age of NASCAR’s champions in the top three series is 24. Is this a trend we’re going to see or is it just a blip in the radar? Jeff V. – Albuquerque, N.M.

A: That’s a great question and it’s interesting you bring this up the weekend Gordon retires. Gordon is only 43 years old, which is young compared to when we normally see drivers retire. Bill Elliott was 48 when he stopped running full-time and was 56 when he stopped entirely. Rusty Wallace was 49 when he retired, and Terry Labonte had just turned 48 when he stopped running full-time in 2005. It was common to see drivers running in their mid-to-late 40s. Many people forget but Dale Earnhardt was 49 when he died and was still very competitive, even at that age. Bobby Allison and Harry Gant both had successful careers well into their 50s. Seeing drivers win races in their late 40s was common back in the day.

Now it’s very rare to see drivers running full-time in their 50s. We have to keep in mind, though, that many of the drivers listed above started their careers in their late 20s to early 30s. That was the way things were done back then. One driver told me that he wanted to go Cup racing in his late 20s and was told by car owners he had to wait until he was 30 years old. Sure enough, when he turned 30, he got his first full-time Cup ride. The only full-time drivers above the age of 44 next season are going to be Greg Biffle and Tony Stewart, and Stewart will be retiring at the end of the 2016 season.

Nowadays, drivers are starting younger and ending earlier. Gordon’s career went 23 years and that seems a little light compared to some other drivers. However, the sport has changed so much, especially for the high-profile drivers. There are a lot more sponsorship commitments than there were been in the past. Plus, there are more races than there have ever been, and drivers are traveling more than before. The races used to be a lot closer but now, with the expansion of the sport, the racetracks are spread out all over the country. I think that has a lot to do with drivers retiring earlier.

So to answer your question, I think it’s the beginning of a trend. Sponsors like younger faces who they can build a relationship with over time, and it’s easier to start sponsoring kids at 18 years old. Plus, a lot of these kids are very talented and began racing at a much younger age. That’s substantially different than it was 20 years ago.

If I recall right, Brad got the shaft 2 or 3 races back also when he had a huge lead and Nascar threw their imaginary debri caution and the tv camera’s saw nobody picking anything up on track. Also, at the time the caution came out Kyle had over a 6 second lead on Kevin and I think Nascar wanted him to win the championship. Brad did Kyle a huge favor by letting him restart on the outside.
Dale Jarrett said on tv that this championship “might” make Kyle Busch hall of fame material. Uh Dale, you had one championship in 24 years and 668 cup races and your in the hall of fame, while Kyle has raced 13 years in cup in 390 races and has won a championship and 34 Cup races, and over all 3 series of Nascar Kyle has over 150 plus wins, all at the ripe old age of 30. Kyle will be in the Hall.
Question: How can Harvick be called ” the closer ” when he had 13 second place finishes this year and 44 over his whole career, that’s not closing out the deal. Jimmie Johnson is the real closer. his 6 championships will attest to that. That’s how you close out the deal.

I have absolutely no doubt in my mind that the caution was thrown intentionally to create a shoot out between Harvick and Busch. Even the brioadcast team couldn’t find any debris except for a flat plastic bottle on the apron and no one was dispatched to pick up anything under the flag stand. If the race goes green the rest of the way there was a good chance for an exciting finish between Kess and Larsen and Busch wins the championship. Kyle threw a monkey wrench into the plan by trouncing Kevin in the end. I don’t think they called the caution to help any particular driver win it. Brian France and Mike Helton have created a ton of fan mistrust in the hierarchy of NASCAR. Enough so that it is all about perception. Because of the inconsistency of their interpretation of the rules and penalties they have created the perception that certain drivers and teams are favored over others. Doesn’t have to be true but if a fan perceives it to be that’s what counts in the end. It’s a shame.

We frequently hear “he won based on the same set of rules as everyone else” as validation of earning the title of chase champion and I don’t buy it. Pre-chase there was little to no argument because the season results, however boring, provided by the Latford system (rules) were as accurate as it gets to defining a true season champion. Kyle Busch is not even close to being an undisputed season champion, he just had a good year and rolled a seven. BZF’s calculated decision to sell out the credibility of “champion” for our entertainment certainly brought us the most memorable moments (highs and lows) of the season but comes at a very high cost to Logano/Penske. Just as the BS cautiongreenwhitecheckereddoublefilerestart cost Kes or Larson a race title, the BS cautiongreenwhitecheckereddoublefilerestart that is the chase, cost Logano a true undisputed season title. This isn’t a KB bash, it’s obvious that he is a top driver, arguably the best at restarts and short runs. He has just never been able to string together a full dominate season and this year is no exception.
I do respect your opinion and enjoy your articles but don’t piss on our legs and tell us it’s raining. That’s Jerry Jordan’s job.