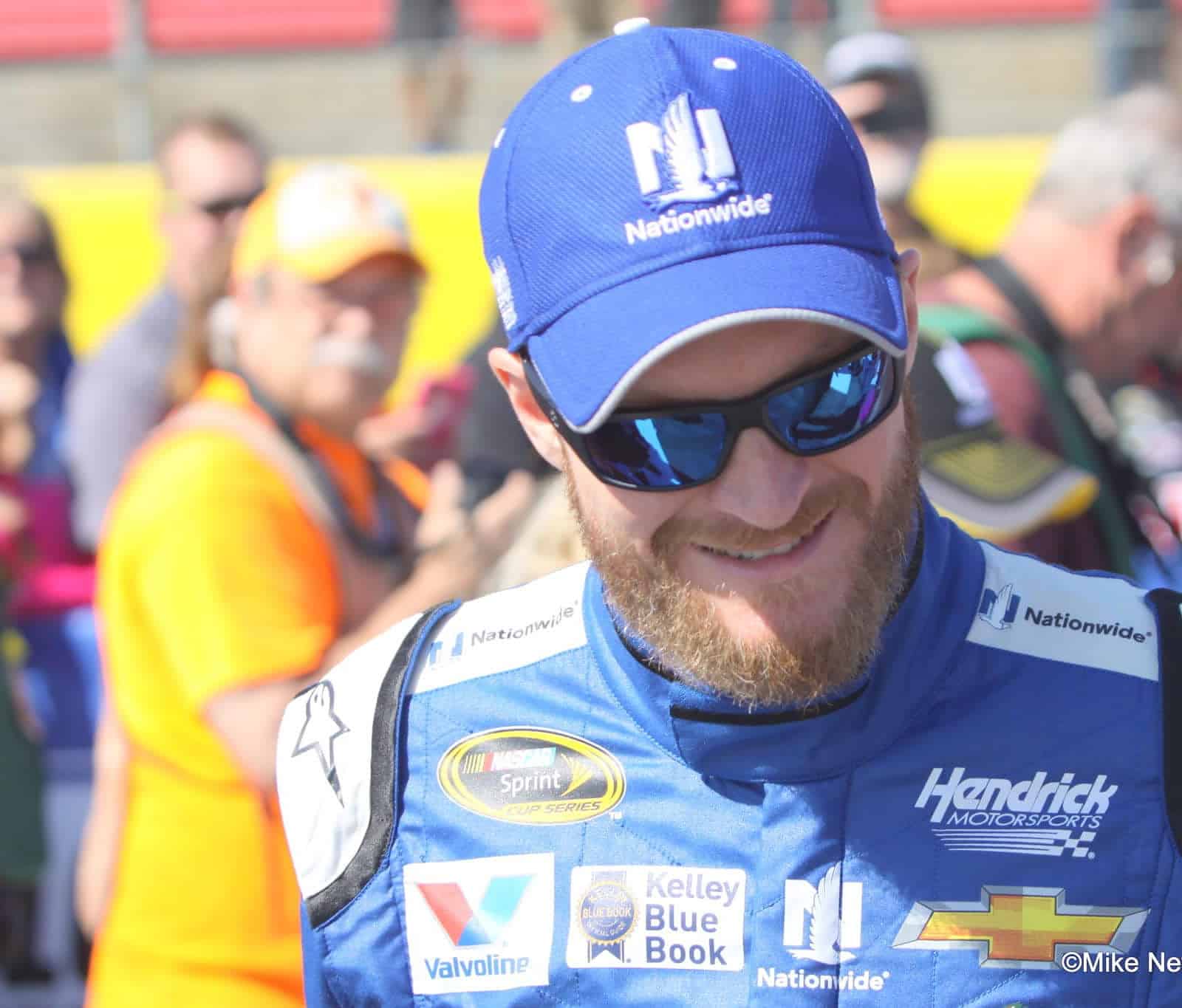 Dale Earnhardt Jr. and his group of buddies had some fun during a pool party. Earnhardt later posted this slow-motion video of himself diving into a pool. Numerous journalists and fans expressed their thoughts on his form and technique.

Kyle Busch captured his first career NASCAR Sprint Cup Series championship over the weekend at Homestead-Miami Speedway. It appears the Las Vegas native has found a new friend to hang out with!

Plenty of Cokes in the cooler to keep me awake. Co-pilot is struggling thou! pic.twitter.com/bRDUvqCbTi

Tony Stewart and his dog Max had the opportunity to hang out during a nine-hour road trip on Monday. Stewart posted numerous photos on Twitter, including this one of him sleeping in the passenger seat. Am I the only one who thinks a road trip with Stewart would be a blast?

.@JeffGordonWeb presents Mr. H his helmet after stepping out of the No. 24 for the final time.#24ever pic.twitter.com/mBCjyXkwtL

Jeff Gordon competed in his final NASCAR Sprint Cup Series race of his career this past weekend at the Homestead-Miami Speedway before retiring. After the race, Gordon presented owner Rick Hendrick with his final race helmet. The helmet featured numerous highlights of his career and was designed by the car owner himself.

NASCARCasm found a brand-new way to have fun while playing outside in the snow. He decided that he would build a Snowdale instead of a snowman like everyone else. Safe to say, NASCARCasm should enter a snowman building competition.

It looks like this Minion only has eyes for @TheOrangeCone #NASCAR pic.twitter.com/yf3t2ocnux

NASCAR executive Matt Humphrey spotted something interesting while walking along pit road on Sunday afternoon before the race. Humphrey shared this photo of a Minion staring down the orange cone. Too bad we’ll never know who won the staring contest….

Creature of habit…. Polishing up pops' ride before practice. pic.twitter.com/YZieQxVV2X

DeLana Harvick, wife of Sprint Cup Series driver Kevin Harvick, shared this photo of their son Keelan on Friday afternoon at Homestead-Miami Speedway. Keelan is pictured here doing some detailing on the car before the first Sprint Cup Series practice session of the weekend.

Chase Elliott walking into the 5/24 shop on Monday like pic.twitter.com/Vj2eT9fIj8

NASCAR Wonka had some fun while using Photoshop on Thursday. Wonka made this photo to show the reaction of Chase Elliott as he walks into the Hendrick Motorsports shop on Monday. I don’t know about Monday since he was at the combined Truck and Xfinity series awards banquet, but who knows about Tuesday.

@LorraBowyer got a little aggressive on the fish in the ole kitchen tonight. ????…? now she gonna ?? me! pic.twitter.com/1rbdKTBc0W

It looks like the Clint Bowyer residence had some action at their home on Thursday. Bowyer shared this photo of a firetruck and police car responding to a call. Looks like Bowyer will have to cook outside from now on! In all seriousness – we hope everyone and everything was alright.

My teammate for the night @justinbieber on the @jimmyfallon show! @NASCAR pic.twitter.com/ooiLwsZdM9

Harvick went on The Tonight Show with Jimmy Fallon ahead of championship weekend. Harvick rode inside this go-cart driven by music singer Justin Bieber while racing Fallon around the track. It appears the two had a great time!