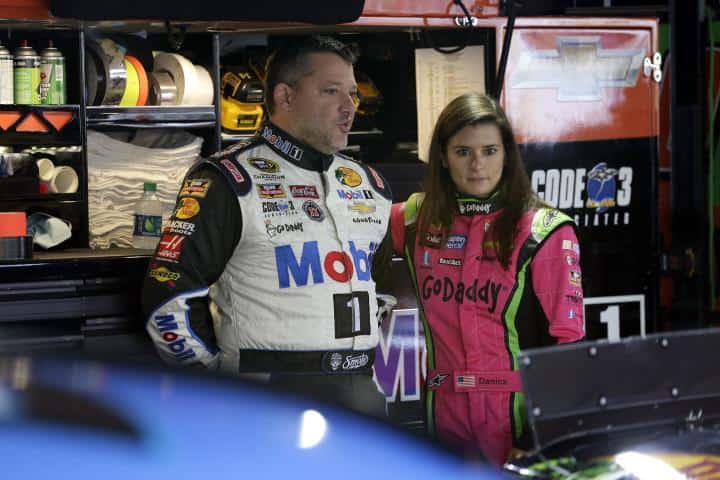 At Championship Media Day in Florida, Tony Stewart hinted at changes for Stewart-Haas Racing. On Monday, the team made those changes public. The No. 4 team for Kevin Harvick and the No. 41 team for Kurt Busch will remain unchanged.  However, the Nos. 10 and 14 will see new leadership.

Michael Bugarewicz has been named the new crew chief on Stewart’s No. 14. He replaces Chad Johnston, who left the team immediately after Homestead to take over as Kyle Larson‘s crew chief at Chip Ganassi Racing with Felix Sabates. For Bugarewicz, it is his first crew chief position. Previously, Bugarewicz served as an engineer on the No. 4 team under Rodney Childers.

Billy Scott will take over as crew chief on Danica Patrick‘s Nature’s Bakery/TaxACT Chevrolet as well in 2016. Scott comes over to the team from Michael Waltrip Racing, where he spent a year and a half as crew chief on the No. 55 Aaron’s Toyota. In that time, Scott worked with Brian Vickers, David Ragan, Brett Moffitt and team owner Michael Waltrip. After a crew chief switch in June, Scott spent the rest of the season as Clint Bowyer‘s crew chief for the No. 15 team, guiding the lame duck team into the Challenger Round of the Chase.

Scott replaces Daniel Knost atop the pit box. Knost has been promoted to the position of Manager of Vehicle Dynamics within the team. Knost will oversee the team’s technical efforts from the shop in North Carolina. According to the team’s press release, Knost will be focusing on track simulation and racecar performance in his new role.

Despite his own team’s struggles recently, Stewart is upbeat heading into his final season as a driver with these changes.

“We have great people at Stewart-Haas Racing and these changes prove that,” Stewart said on Monday.  “We were able to promote from within while also adding new talent.

“Change isn’t easy, and that’s particularly true when it comes to my relationship with Chad Johnston,” Stewart continued.  “He served as my crew chief during two very difficult seasons. He was always supportive and he’s become like a brother to me. I think very highly of Chad and wish him nothing but the best in his new opportunity.”

In 2015, SHR was a tale of two strong teams and two mediocre teams. Harvick won three races and finished second 13 times on the way to a second-place finish in points to Kyle Busch. Kurt Busch, despite being suspended for the first three races of the season, won two races and finished eighth in points. Meanwhile, Patrick finished 24th in points with only two top-10 finishes. It’s still her best season in Sprint Cup, but the improvement has been slow in coming. Stewart had the worst season in his career in almost every statistical category, finishing 28th in points with only three top 10s.

The changes noted above take effect immediately as the teams get ready for the 2016 season at the SHR shop in North Carolina.

spot1
Reply to  Bill B

S’pose the crew chief didn’t want to work with the Princess anymore? His radio comment at Martinsville was spot on after she wrecked herself out of the race.

remember, it’s always the crew chief’s fault. look at how many dale jr has been through. no one will blame cash cow drivers.

Come on… Jr has won races, contended for championships a few times, and had success with multiple crew chiefs and teams.
Even though what you say is technically true for all drivers, to compare Jr to Danica (a.k.a. PSP) is really unfair (and I’m not even a Jr fan).

bill – yeah, but when he was in “slump” with dei after eury and at hendrick (with exception of daytona in those early years there) poor crew chief’s got thrown under the bus.

I’m with Janice on this one. He always had the best money could buy and only has mediocre results with it. On the other hand, he is the most popular and the truth is always on the tip of his tongue. You have to like the guy.

Caption for the picture….

Danica: “But Tony, what will I do next year when I still can’t break the top 20 in points”

Tony: “Frankly my darling, I don’t give a damn”.

Good to see your filter is again intact and you didn’t post the caption that crossed some of our minds. Well done.

Bill B
Reply to  J.Smith

Yeah, I thought I’d try to bait someone else to provide the obvious R-rated caption but there were no takers.

I had one written but just couldn’t hit Post.

babydufus
Reply to  Bill B

“what the hell tony? chase elliot gets a dipstick, a blow up action figure and a garden gnome and he’s not even a full time cup driver yet? I need a gnome… jr says gnomes are magic and god knows my crew chief isn’t cutting it.””

Good point. I believe this is her 4th crew chief in her 4th season. Obviously either no one wants to be her crew chief or the crew chief is the scape goat.

even worse for Tony Stewart is Danica Patrick finished 6 positions ahead of him in points!

I’m going bold and will predict Danica improves to 22nd in points next year and doubles her top 10’s from two to four. She will sell 240 more t-shirts, 150 more ball caps, four dozen bobble-heads, and film a dozen new commercials. In other words, she will fulfill her potential.

Will new crew chiefs make a difference with drivers who are finishing at about the level of their current ability? Probably not, but it will let them leave the winning combinations in place for the other two cars.

After what Harvick did, he doesn’t even deserve to be in the show next year. I’d bet Childers could double the points standings of either the 14 or the Puppy Princess Rainbow Pony (whatever y’all call her). There’s a good chance Childers could get either of them in the chase. The hell with it, I think he should crew chief both those cars simultaneously. I put 29 stickers on my lawn mower in 2002 and I’m gonna go yank em off of there right now. On second thought, I might just buy a new lawnmower. Third thought, Childers should go to Larson. Now there’s some real potential.

Janice… show some respect… Danica is an All-Star. Her fans said so.

Women Drivers! Her NASCAR stats prove without a doubt that men are better drivers and that this country went to hell when we gave women the right to vote. That last parts not mine, a country bumpkin actually told me that with conviction. I’ve warmed up to her over the years now that the hype has died down. My wife’s driving reminds me of PS Pony’s (they both have road rage issues) and I think my wife could take her. PS Pony will no doubt make the hall of fame. Squirrel…I just googled WWE and they have a HOF so I guess NASCAR’s is just as legit.