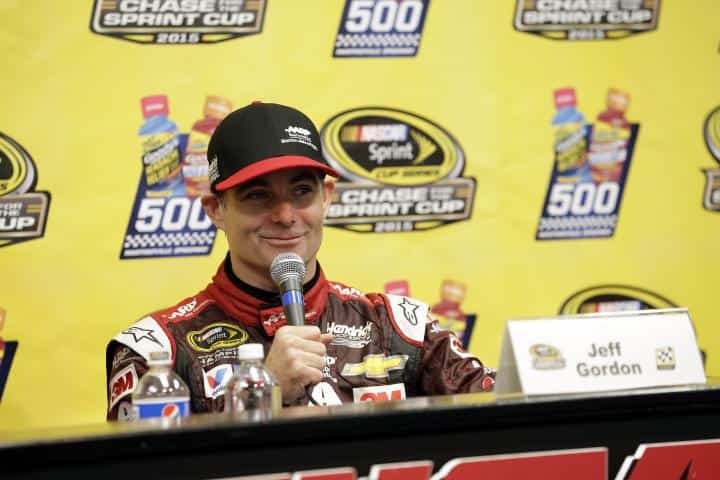 On Friday night, the 2015 Sprint Cup Series season truly came to a close with the annual Sprint Cup Series Awards Banquet at the Wynn Las Vegas in Nevada. It was, as usual, a star-studded affair. Honorees and guests were treated to a routine from host Drew Carey, and performances from Sam Hunt, Rachel Platter and more.

Some hardware was also handed out. Dale Earnhardt Jr. claimed his 13th straight NMPA Sprint Most Popular Driver. By virtue of winning, Earnhardt earned $10,000 that will be given to the charity of his choice.

Jeff Hanson, a 22-year old race fan from Kansas, won the Betty Jane France Humanitarian Award. At the age of five, Hanson was diagnosed with an optic glioma, a tumor on his optic nerve that slowly degraded his vision to the point of legal blindness by age 12. The tumor was caused by neurofibromatosis (NF), a rare genetic disorder that currently has no cure.

During his chemotherapy, Hanson took up painting in bright colors and selling said paintings to benefit the Children’s Tumor Foundation (CTF). Over the past decade, Hanson’s paintings have raised over $250,000 for the CTF. The CTF, which uses motorsports to help spread their message through drivers such as Ryan Eversley, will receive a check for $100,000 on behalf of Hanson from The NASCAR Foundation. In addition, the CTF will also receive a brand new 2016 Ford.

The drivers’ speeches also had their moments. Martin Truex Jr. dedicated his entire 2015 season to his girlfriend, Sherry Pollex. Pollex has been fighting ovarian cancer for the last year and change. During Championship Media Day, Truex mentioned that Pollex is down to one chemotherapy treatment a month. The last of those sessions will be in February, just prior to the start of Speedweeks.

For Jeff Gordon, NASCAR wanted to send him off in style. So, to start, they booked Tom Cruise for the introduction without notifying Gordon or Rick Hendrick. As a result, it was a complete surprise to nearly everyone when the man who played Cole Trickle in the 1990 film Days of Thunder walked out on stage.

NASCAR CEO Brian France then took the stage to say some words to the four-time champion.

“Jeff, it’s been an honor to watch your exceptional career,” France stated. “From the very beginning you’ve represented this sport with dignity and class. You’re the very definition of a champion and quite simply you changed the sport for the better, ushering in a new era of excellence on and off the track.”

Afterwards, France gave Gordon the Bill France Award of Excellence. A rare award, the honor is something similar to a Lifetime Achievement Award. Gordon was given such an award during the NMPA Myers Brothers Luncheon on Thursday from Chevrolet.

Gordon then took the stage and struggled through what amounted to a tearful farewell speech to all his friends and colleagues.

“Motorsports has provided me lifelong memories and stories that I get to reminisce and talk about for years and years to come,” Gordon said. “NASCAR in particular has changed my life in ways that I could never really even describe. It’s still really just a blur to me. It seems like it was just, you know, not that long ago that I was traveling from Indiana to North Carolina to see what NASCAR was even all about, and now here I am 25 years later stepping away from one of the most prestigious series in all of motorsports and a fulfilling career.”

Sprint Cup Champion Kyle Busch gave thanks to his team for everything that they did to allow him to claim his first Sprint Cup. However, the real thanks went to his physicians, Dr. Todd McCall and Dr. Bob Anderson for “putting him back together” after his crash in the Xfinity Series Alert Today Florida 300 in February that left him with a broken leg and broken foot.

It was a fun night for all in attendance, drivers, owners, media, crew members and fans alike.

Thanks Phil, I know me and mine couldn’t watch the farce and the lies. But thanks for the update anyways.

Odd for Gordon to complain about debris cautions. He got one hell of a lot of them to keep him from going a lap down or to give him another shot at a less-popular leader.