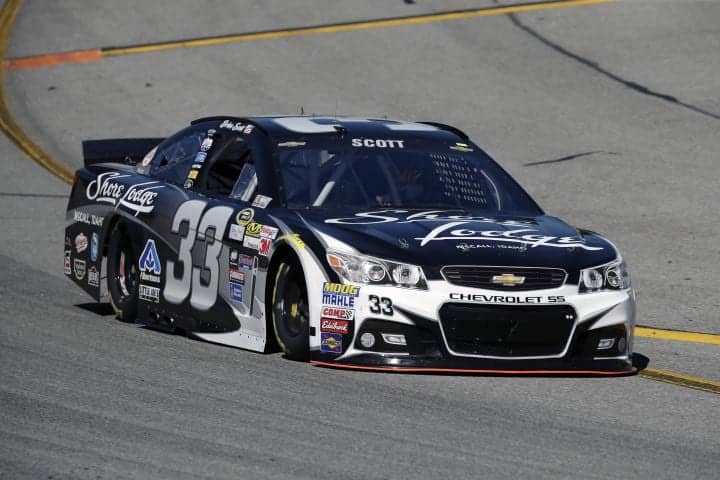 Like Chris Buescher before him, Brian Scott is moving up.

Scott, formerly a competitor for Richard Childress Racing in the NASCAR Xfinity Series, will pilot Richard Petty Motorsports’ No. 9 in the Sprint Cup Series in 2016, the team officially announced Friday, Dec. 11.

Sponsorship details have not been announced, though the press conference was accompanied by a Twisted Tea No. 9 car. Last year, Scott was sponsored primarily by grocery chain Albertsons plus Idaho’s Shore Lodge, which the driver’s family owns.

Scott replaces Sam Hornish Jr., who drove for the team in 2015 after taking over for Marcos Ambrose. Hornish’s 2016 plans have not been announced.

A crew chief for Scott has not been announced; the team revealed Friday that Kevin “Bono” Manion, who took over the No. 9 last spring, will not return.

The inclusion of Scott gives the Cup Series another rookie among its ranks to compete for the Rookie of the Year award in 2016; along with Buescher, who was named the driver of Front Row Motorsports’ No. 34 (with assistance from Roush Fenway Racing) yesterday (Dec. 10), Ryan Blaney (Wood Brothers Racing’s No. 21) and Chase Elliott (Hendrick Motorsports’ No. 24) have also been announced as Cup rookies.

“I am thrilled to go Sprint Cup Series racing full time next year and to do it with such an iconic team,” Scott said in a press statement. “When you think NASCAR racing, you think Petty. I’m glad to now be a part of that legacy. I had a lot of fun competing in the Xfinity Series for the last seven years, and I’m excited to take the next step. I ran some races in the Sprint Cup Series the last few years and learned a lot. I feel like we are in a good position to compete for the Rookie of the Year next year and continue the consistency that RPM built over the last few years.”

“We’re happy to welcome Brian to the team,” team co-owner Richard Petty added. “Our team has worked very hard to continue our winning tradition and building consistency. We feel Brian is a great addition to that. He’s made a steady progression through the ranks, and now, we feel he’s ready to compete in the Sprint Cup Series.”

Scott joins Aric Almirola, who returns to the team’s fabled No. 43 seat for the fifth year in a row.

As it stands, Scott’s only wins in a top NASCAR series came in the Camping World Truck Series, where he won twice – once in 2009 as a full-time competitor and again in 2012.

A replacement for Scott at RCR in the NXS – if any – has not been announced.

Wow, desperate times for Nascar team owners. This guy does not bring anything to the table regarding anything related to driver results. Sam Hornish Jr. is a accomplished driver, seems like the stock car did not fit him whatever reason.. BUT..Sam’s 110 races in the Xfinity series are much better than Brian’s 208 races . Seems like the team is going to be wasting $$$$ on torn up race cars. No diff. Brian has been around for some time without “results”. Jeez… Pitiful. But hey, that is my opinion. So many other true talented drivers to be had but without $$$ which ironically can cull more sponsors to sustain. What a paradox, what a shame.

Yea, It’s hard to get excited that Scott is in the 2016 show. Just another mediocre driver living the dream off daddy’s fortunes. That Petty/Scott announcement (spin) is hard to read without falling down dizzy. Ouch, there’s another other blow to the groin of RCR? It’s a matter of time before Menard jumps ship with his daddy’s money and Newman better hope Caterpillar doesn’t see more value in another young, semi talented RCR grandbaby.

Just another sign of the times. A team which is more of an investment to its majority owner than a race team. It shouldnt be surprising that they take a driver who brings dollars ratherr than one who brings talent.