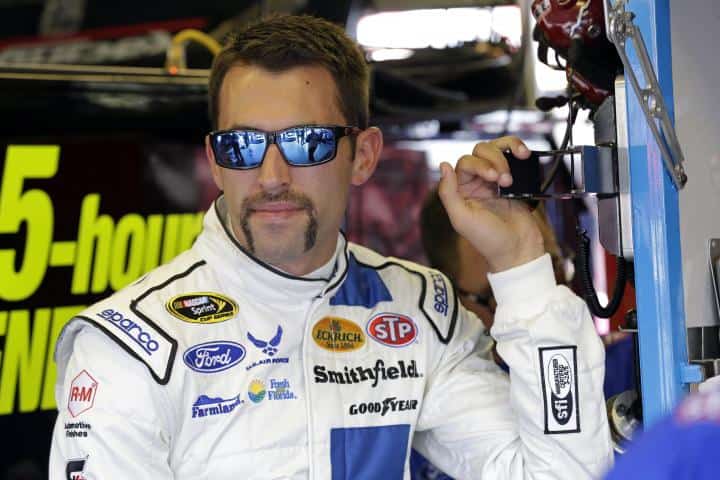 You couldn’t say it wasn’t an interesting year for Aric Almirola and his No. 43 Richard Petty Motorsports team. The team made the Chase for the Sprint Cup in the 2014 season and was looking to do that again as they headed into the 2015 season.

Instead, the season would be marked by decent consistency that was always suppressed due to bad luck.

Speedweeks 2015 started off with Almirola being eligible for the Sprint Unlimited at Daytona due to the team’s Chase berth in the 2014 season. That meant he was going to have the extra track time and had a chance to start Speedweeks with a victory. After all, he had won the prior race at Daytona in July 2014, and a win in the Sprint Unlimited meant would mean a great start to the year. They started the race in the 18th position in the non-points event and was moving along nicely until Greg Biffle and Jamie McMurray got together on lap 46. Almirola tried to avoid the incident and slid up and hit the wall. He finished a disappointing 19th.

The rest of Speedweeks turned out much like the rest of 2015. The team recorded the fastest time of any driver during qualifying when they topped the first round of the speed charts. However, the unusual qualifying format saw a lot of surprises and Almirola ended up qualifying in the 17th spot, relegating him to an eighth-place starting position for his Budweiser Duel. Early in his Duel, an incident with Johnny Sauter and AJ Allmendinger hurt his chances to salvage a good run. He moderate damage but it was enough to effect the No. 43 car and Almirola finished in the 20th position in the race. He and his team were forced to fall back on their qualifying speed to make the Daytona 500.

In the Daytona 500 the team started in 33rd and worked their way up to a 15th-place finish, having a pretty uneventful day considering how their Speedweeks started. Their goal to make the Chase looked to be right on target early in the season as the Trent Owens-led team was 10th in points after the first five races. The consistency early in the season continued as the team rattled off seven consecutive top-20 finishes, ending with an impressive fifth-place run at Dover in June.

A blown engine at Pocono ended that streak but he was still well inside the Chase, being 12th in points. That sent he and his team into a little bit of a downslide. The blown engine at Pocono was followed by a disappointing 22nd-place finish at Michigan. During the July Coke Zero 400 at Daytona the team was running well until they were involved in the Big One on lap 106. They were able to repair the No. 43 car, but the defending champion of the event finished in the 34th position. That dropped Almirola to 16th in the standings.

Not having the speed to win races and run in the top five on a consistent basis was the ultimate demise for the No. 43 team this season.

Another major setback for the team in 2015 was in the Crown Royal Presents the Jeff Kyle 400 at Indianapolis Motor Speedway. That’s when Almirola lost control of his car coming off of turn 2, spinning hard into the inside wall. The team finished in the 38th position and ended up 17th in points after the race.

With just a few races to go until the Chase the team needed to get a win or pull off some great runs to get themselves back into the Chase picture.

It was at Richmond where the defining moment for the No. 43 occurred. When Almirola and his team needed to step up the team took to the challenge. After starting in the 24th position, the team ran great and steadily climbed through the field all day long. By mid-race, the No. 43 car was in the top 10, and in the closing stages of the event the team found themselves in the top five. In the end the team didn’t have enough to contend for the win, but it was still an impressive day for Almirola, who finished the night in the fourth position and outside the Chase.

Even though the team missed the Chase the team’s performance picked up in final 10 races. Another top-five run at Dover in September was followed by a 10th-place run at Charlotte. That really showed the team and Almirola were prepared for a Chase run if they made it there.

The latter part of the season was a microcosm of what the whole season was about for Almirola. Talladega started a string of five consecutive top-20 finishes for the team but it ended with some bad luck. During the season finale at Homestead they were involved in a crash on lap 47. They were able to repair the car but finished a dismal 41st.

In the end Almirola finished 17th in the final standings, just one point ahead of Kasey Kahne. He had three top-five and six top-10 finishes.