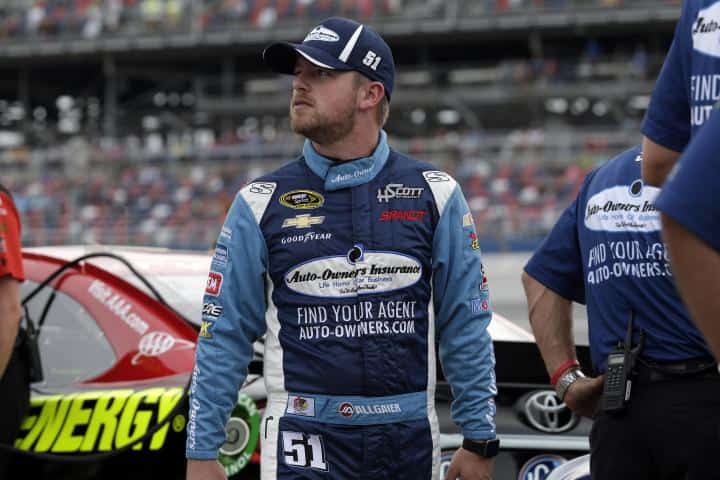 The 2015 season saw Justin Allgaier return to the HScott Motorsports team for a second season, this time with a teammate in tow. The growing organization, led by owner Harry Scott Jr., had a full year under its belt and came in with high hopes. But the year didn’t end up quite the way anyone had hoped.

The season opener at Daytona brought a late-race crash and a disappointing 37th-place finish, along with a severely damaged No. 51, not exactly the way anyone wants to start off the year. In the weeks that followed, Allgaier struggled to even finish inside the top 20, until Auto Club Speedway. In the fifth race of the season, the team once again showed its strength and managed to pull off a 12th-place finish, a mini victory in a sense.

Fast forward to Bristol in April and you’ll find Allgaier’s career-best Sprint Cup finish, an eighth-place run in a race extended by 11 laps for a green-white-checkered finish. And while many wouldn’t celebrate an eighth as something fantastic, for the No. 51 team, it was nearly a victory. Having faced so much adversity for so long, finally finishing where the car was capable of running many weeks was a sign that things were headed the right direction.

And for a little while, it seemed like that would be the case. The eighth-place result at Bristol started a string of three straight lead-lap finishes, a small victory in the big picture for the team. Having a teammate who was struggling even harder to finish races, Allgaier finishing on the lead lap was just a small piece of the large puzzle HScott Motorsports was trying to finish. That string of small successes didn’t last long though.

Things weren’t exactly going all that well on track, and the No. 51 team continued to struggle to finish where it had run during the race. Then, the closure announcement from Michael Waltrip Racing, combined with Tony Stewart‘s impending retirement at the end of 2016, saw Clint Bowyer in need of a ride for one year before taking over the No. 14 Chevrolet at Stewart-Haas Racing. Enter HScott – in two years, Allgaier had just a single top-10 finish to show for his time with the organization. Suddenly, the world came crashing down when the news came that Bowyer would join the team in his place.

Facing uncertainty about where he would end up for the 2016 season, Allgaier spent his race weekends focused on making the No. 51 Chevrolet as strong as it could be. Meanwhile, off the track, he continued to reach out to teams that might have room for him and sponsor Brandt, which had followed him to the Cup Series at the beginning of the 2014 season.

After considering multiple options that were given to him, Allgaier landed at JR Motorsports, and while it meant dropping back to the XFINITY Series, a huge weight had been lifted. With the distractions of trying to put together his plans for the future, Allgaier was able to focus on the remainder of the year. But as the Chase drivers fought their way to the championship, things seemed to go downhill for the No. 51 team. In those final 10 races, Allgaier managed to finish in the top 20 just twice (13th at Martinsville and 17th at Phoenix), and along the way, he scored two DNFs.

When the checkered flag flew over Homestead-Miami Speedway to close out the season, Justin Allgaier had a mere 11 lead-lap finishes in 36 races and sat 30th in standings. But despite the struggles through his two seasons in the Cup Series, trying to build a team into something from virtually nothing, the future looks bright for him, even if it does mean a return to the NXS.

Such a bittersweet day, so proud of the last 2 years with @Team_HSM and all of our partners..Didn't get the finish today,but,it's been fun!