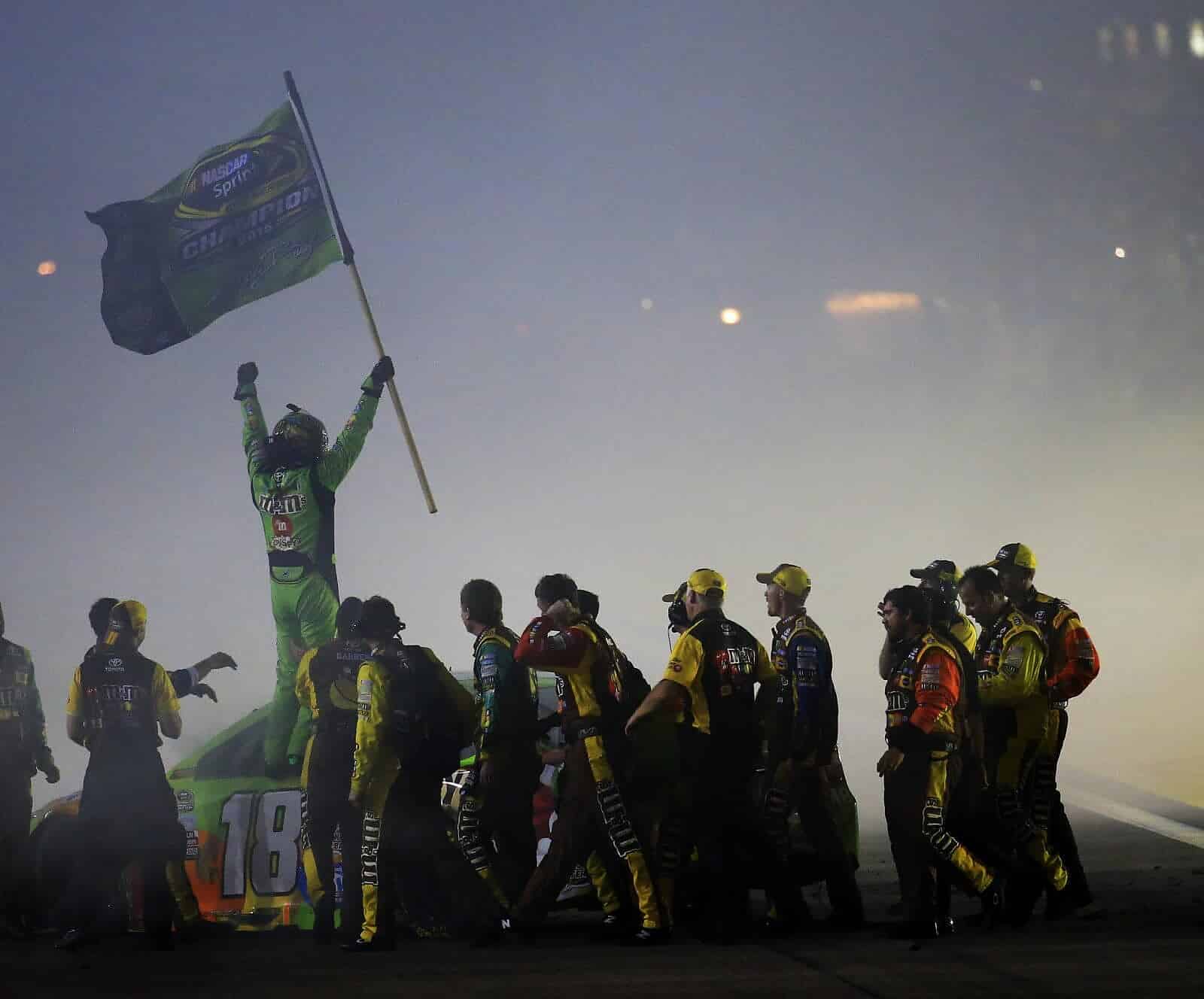 Racing can test the mettle of the strongest of characters, and before 2015 many people would say that was not a strong suit for Kyle Busch. This season ran the emotional gamut from the lowest of lows to the highest of highs in nine months. Busch’s determination and mental fortitude were taken to the limits during a three-month rehabilitation from a horrific accident at Daytona in February. His drive and patience were pushed to their maximums as he soldiered into the Chase and ultimately all of the way to Homestead-Miami Speedway, setting the table for a shot at his first career Cup championship. In the end he unleashed the raw talent that has occasionally cost him titles and drove his way to a career validating triumph and NASCAR crown.

Busch rolled into Daytona and looked to kick off his season with an Xfinity Series win before laying the groundwork for a successful season in the Cup series. That all changed on lap 112, when Busch lost control of his car on the front straight and hit the interior wall, head on, at 176 mph. The impact caused a compound fracture of his right leg and a broken left foot. Busch spent six days in the hospital between Daytona and North Carolina before moving to a hospital bed in the living room of his Mooresville, N.C., home.

Busch spent nearly three months on the sidelines, watching Matt Crafton, Erik Jones and David Ragan all drive his car. There is no greater motivation to a driver than seeing someone else in his racecar. Busch discovered more about himself during those three months than he had in the previous 29 years on the planet. The birth of his son only added to the maturation process of Busch as both a driver and a man.

Busch was granted a medical waiver for the Chase but that only meant, were he able to win a race he still had to finish the regular season in the top 30 in points. There was no exception to that part of the rules. Busch returned for the Coca-Cola 600 at Charlotte and put in a solid 11th-place run.

Sonoma Raceway was the first salvo fired in the Busch onslaught to the title. In a surprising race, Busch put his still-aching leg and foot to the ultimate racing test by driving from an 11th-place starting position to the victory at Sonoma. The win checked off the first box on his drive to Chase eligibility, but he was still 37th in points. After a return to Daytona and an inauspicious 17th-place run, Busch went on a tear that proved he was back and ready to contend for the title, if he could only get into the top 30 in points. Busch won the next three races on the schedule on three very different race tracks: the flat half-mile at Loudon, the banked 1.5-mile oval at Kentucky and the legendary 2.5-mile Indianapolis Motor Speedway. As the checkered flag flew over his fourth win in five races, Busch was 23 points out of the top 30 with six races left until the Chase.

The first glimpse of Busch’s new found maturity took place at Watkins Glen, two weeks later. In a fuel-mileage race, Busch was running second as the race was winding down and had the potential to win a fifth race in seven events, but it could have come at the cost of running out of fuel and a deep pack finish. Busch saw the bigger picture of trying to make the top 30 in points and drove a conservative last dozen laps to make it to the finish and break into the top 30 in points. The next four races saw Busch run 11th, eighth, seventh and second to solidly make the top 30 and qualify for the Chase.

The first segment of the Chase wasn’t his best, but the second round truly showcased Busch’s maturity when he had a mid-race incident with Kyle Larson that damaged a car that was in contention to win at Charlotte Motor Speedway. Busch had similar incidents in the past derail title runs, but this time he soldiered on and salvaged a 20th. Busch then did what was necessary over the next two races, finishing fifth at Kansas and 11th at Talladega to move to the final elimination round before Homestead.

The next three races exemplified the championship mentality that Busch exuded as the season wound down. Busch never took unnecessary chances or put himself it awkward situations as he ran fifth, fourth and fourth at Martinsville, Texas and Phoenix.

The comeback season culminated at Homestead when there was no longer a reason to worry about points or finishing positions. Busch started the race in the third position and kept himself in the top three for the entire race except for green-flag pit stops. On the final restart Busch sailed the car into turn 1, beat Brad Keselowski back to the start/finish line on lap 261 and then didn’t put a wheel wrong over the final six laps to take the 2015 title.

Busch is 30 years old and could be on the cusp of a run of championships like we’ve seen with several other drivers over the history of the sport. It is far more difficult with the current championship format, but the driver who is second in all-time national series wins could cement his position as the best in the sport’s history with a run of three or four titles in the next 10 years. The challenge is formidable, as Jimmie Johnson, Keselowski and Kevin Harvick are not done yet and the sport is seeing an influx of driver talent, with Larson, Jones, Ryan Blaney, Chase Elliott and others looking to make the task daunting for Busch.

Many drivers over their careers have gone from villain to fan favorite. Most of them have had a seminal moment that marked that transition. The most celebrated was the moment when Rusty Wallace spun Darrell Waltrip during the Winston. For Busch, that moment appears to be the crash at Daytona. While some reveled in the moment as it being karma for Busch’s continued domination over NXS regulars, others have been cheering the once-reviled driver for his battle to return and his drive to the title. When the checkered flag flew in Homestead and Busch made his ceremonial bow amid the smoke from his burnout, there were far more cheers than jeers.

While Busch may never be accepted as the all-time winningest driver in NASCAR because the majority of his victories are in the NXS and Truck Series, he is now being celebrated for his talent and accomplishments more than any other time in his young career, and that counts for something.

While Kyle still has a lot of folks that don’t care for him, I believe Kevin Harvick has overtaken him for the title of Nascar’s biggest punk. Talladega’s next-to-last restart was Harvick’s defining moment.

I know a lot has been debated about whether Kyle deserves the waiver he got from Nascar. No matter how you feel about him missing eleven races, there’s no denying that what he did on the track during the the other 25 races was one hell of an accomplishment. It took talent, maturity, perserverance, and real guts to pull off a such a clutch performance.

I’m sure the NFL would let a team that didn’t play 6 games go to the Super Bowl.