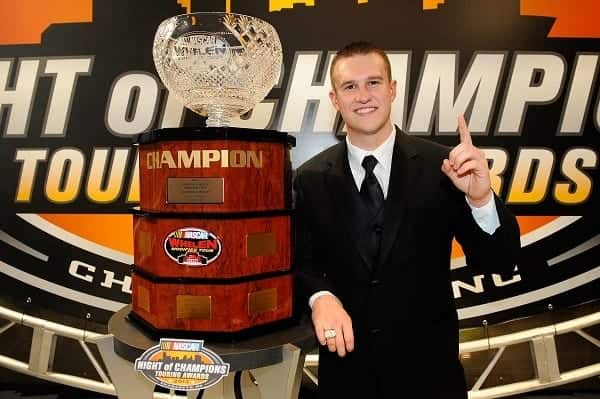 A dream came true over the course of one evening for a young man. As he drove his No. 6 TS Haulers car to Victory Lane at Stafford Motor Speedway in early August, that dream became a reality for the 2013 NASCAR Whelen Modified Tour champion.

After joking around with NASCAR Sprint Cup Series team owner Tommy Baldwin about putting together a second team for Ryan Preece at Loudon, the two made a bet that if he won at Stafford, he would get the ride. He did just that, beating this year’s champion, Doug Coby, by leading 69 laps that evening. The next day, he woke up with a wide grin as he got the message he had always been waiting for.

Making his Sprint Cup Series debut at Loudon in September, Preece was entered in a combined effort between Tommy Baldwin Racing and Premium Motorsports. Prior to the race, the only other time he had stepped foot inside of a Sprint Cup car was at Thompson Speedway’s road course for a test session.

“It was definitely a different feel because our goal was to get seat time and to not do anything stupid, getting approved for the races we wanted to do and not have any problems,” Preece told Frontstretch. “As the race would go on, I would get faster and it is just one of those deals where you can’t pass. You gradually get better and better because [being in] the actual race is the best way to learn. It was a really successful five races and we can build on it for next year I hope.”

Finishing 32nd, four laps down in the No. 98 car, the man known as “the Modified guy” earned a seat for the final four races of the season. With an average finish of 37th, Preece accomplished his goal of competing with NASCAR’s top drivers, but now that the season is over, there are more question marks than ever before for the 15-time WMT winner.

While the option is open for Preece to return to the WMT for Ed Partridge’s team, there might be another opportunity in NASCAR’s premier division given the right set of circumstances.

“As far as I know, no one has said anything to me,” Preece said about running full-time in the Cup Series. “I know we are trying, and we’d really like to do it. To be at that level and be able to do it would really be awesome. Tommy is a huge part of everything that I do in the ‘big three’ group when it comes to moving up. Tommy has been pretty much the whole reason that I have been getting this opportunity.

“There is a lot of stuff going on for him and for Jay [Robinson]. We’ll see if we can make something happen and get something done for next year.”

Alex Bowman signed an option to continue driving the team’s No. 7 car midway through the 2015 season, eventually finishing 33rd in points, and Baldwin confirmed that he will continue to serve as the team’s crew chief in 2016.

“Knowing that he didn’t have any Cup experience, we knew his strongest races would be obviously where he raced at in the modifieds at New Hampshire and Martinsville,” Baldwin commented on Friday. “It was good to get him that experience for sure to see if he could adapt. Now, it is all about what is going to happen in the future, and we don’t know anything yet.

“His future depends on how much money can be raised. That is the future. You can’t do any of this without any money. It’s what he is up against like a lot of other good racecar drivers. He is a student of the game and really wanted to do well. He worked hard on studying to try to be better after every practice. He wants it, and again, like all kids that have this opportunity, you have to prove yourself. I think he did a really good job staying out of trouble, and now it’s all about finding the funding.”

Preece, 25, finished second in the WMT championship battle in 2015. After not competing in a modified for more than a month, he won the Turkey Derby at Wall Stadium. During the race, he came back from a spin and multiple on-track incidents for his first victory in the prestigious race.

Premium Motorsports has not announced what they will be doing next year. The team ran two cars in 2015, the Nos. 62 and 98. For the events that Preece competed in, TBR partnered with Premium to field him in the No. 98 car since it was locked in based on owner points. Baldwin stated that he has not had any discussions with any other drivers to start a second full-time car.

“The business side of the whole medallion thing, I’ve heard very little,” Preece said about the effects of franchising in NASCAR. “I live in Connecticut and I race modifieds. It’s one of those deals where I understand what could happen, but I don’t ask questions as far as that goes. I don’t really think it will effect anything that I do.”