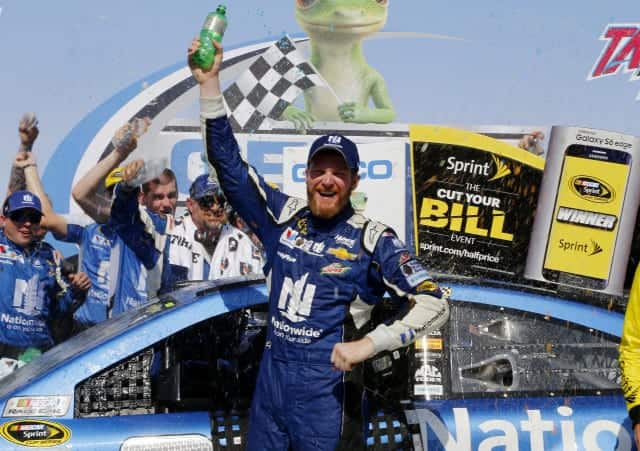 Dale Earnhardt Jr. started the 2015 season with a third-place finish in the Daytona 500. It was hardly surprising since the speedway is his second best track, historically, based on average finish. Interestingly that run would be the worst of Earnhardt’s four restrictor-plate races for the season. Earnhardt started the year with two third-place finishes and a fourth in the first three races before a last place run at Phoenix. The second plate-track race of the season, at Talladega, was Earnhardt’s first visit to Victory Lane, tying Jeff Gordon for most wins in history at the track with six.

Earnhardt hit the figurative midway point of the season, the July race at Daytona, and cemented his position in the Chase with his second win of the season. Unfortunately for many race fans they didn’t see it live because the checkered flag flew at 2:40 in the morning. When the checkers flew the next week at Kentucky, Earnhardt had logged nine top-five finishes through the first half of the season.

Earnhardt’s average finishes over the next eight races to finish off the ‘regular season’ were not as impressive as the first half of the year. An inspired move passing Jamie McMurray on the outside during the final restart at Dover was the difference between advancing to the second round and being one of the first three out of the title hunt. Poor runs at Charlotte and Kansas left Earnhardt in the unenviable position of having to win at Talladega or be out of the title hunt. Thanks to the late-race caution that flew shortly after the green flag flew for the green-white-checkered finish, Earnhardt finished second by a matter of feet and was ousted from the playoffs.

Earnhardt came out strong for the final elimination round of the Chase, concluding it with a win in the rain-shortened event at Phoenix. He would have made the final four thanks to that win, had the yellow flown a couple of seconds later at Talladega, but in the end it didn’t matter. Earnhardt had a horrendous Homestead, crossing the line in 40th position, 26 laps down after being caught up in an early-race incident with Clint Bowyer and Ty Dillon.

With Gordon leaving the sport and Tony Stewart running one more season, Earnhardt will be one of the elder statesmen of the series. He is still contending for wins and the title, and he’s stated that he now has a greater appreciation and understanding of what it takes to be a champion. With the current Chase format the chances of Earnhardt winning a title are as good as anyone’s, but the window is closer to being closed than being completely open. His team needs to tighten up their decision making, having given a couple of races, or at least good finishes, away this season.

Earnhardt continued his run as the most popular driver in the sport. During the Myers Brothers luncheon in Las Vegas, during championship week, Earnhardt claimed his 13th consecutive NMPA Most Popular Driver award, extending his record consecutive streak to 13 years. Earnhardt is now three years away from tying Bill Elliott for the most all-time at 16.

Earnhardt also laid claim to the king of merchandise again in 2015. Of the 10 most popular diecast cars distributed by Lionel in 2015, Earnhardt had five of them. His primary paint scheme was the number one seller. Gordon had four cars on the list while Chase Elliott was the only other driver in the top 10.